Kanikunda Lower Basic School is in the small community of Kanikunda (often spelt as two words Kani Kunda, or Kanni Kunda) close to the town of Soma in the Lower River Division. Soma itself lies south of the river on an important road junction where the main east-west South Bank Road crosses the north-south Trans-Gambia Highway. Kanikunda is often used as a distribution point for goods from UK shipments to upcountry schools and communities. Pageant teams travel upcountry twice a year to visit schools and families in places such as Jarreng, Kalagie, Kudang and Pakaliba, as well as Kanikunda which is Wandifa's original home village. The distance from Banjul means that visits are usually short, and not all villages and schools can be visited each time.

Pageant members Miriam Reed and Richard Kirkwood have been visiting and helping Kanikunda LBS since 2011:
"We came across Kanikunda quite by accident in 2011 when we went on a bird watching trip to Tendaba. Wandifa asked if we minded visiting his family in his home village, and as he knew I had been a teacher, he wondered if we would like to visit the school. We had nothing to give them except one soft football which they were delighted with. We promised to return the next year with footballs and a football kit. We also noted that some of the classroom floors were so badly cracked that the rooms were not safe to use. That was what really started our fund raising for Kanikunda."

These are some of the photos taken during Miriam's visit. They left some money to help with projects at the school, and went back in January 2013 to see how it had been used. 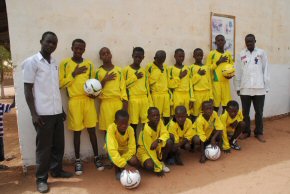 The promised footballs and kit 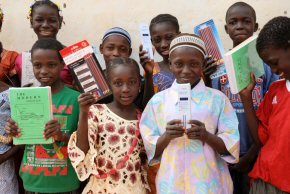 Some gifts for the school 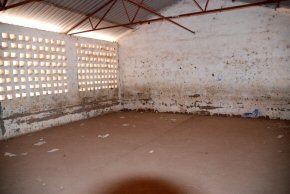 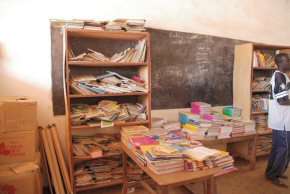 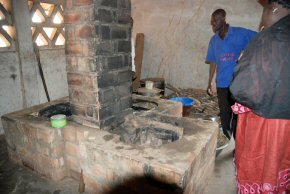 The well which no longer works 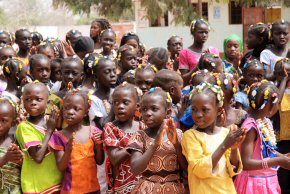 Commonwealth day
(traditional to have sweets tied into their hair)

In April 2012, a Pageant team travelled upcountry to Jarreng and Kanikunda. As well as visiting schools they distributed mosquito nets, mostly purchased under Pageant's Ethical Gifts Scheme. 32 nets were given to families in Kanikunda. 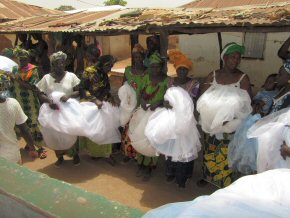 This area of The Gambia is particularly badly affected by malaria, so has been the focus of Pageant's efforts to combat it, both by distributing mosquito nets, and by encouraging the villagers to grow and use Artemisia. This plant has proven anti-malarial properties, and a tea made from its leaves has been used for centuries in China in the fight against malaria. [read more about Pageant's Artemisia Project] Batches of Artemisia plants were distributed to Kanikunda and other villages in this area.

Miriam returned to Kanikunda in January 2013, and took these photos of the improvements that had been made. 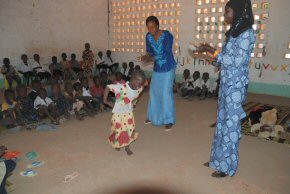 The nursery - no furniture or equipment 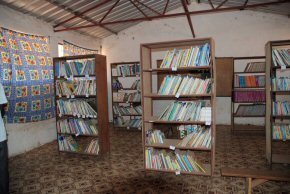 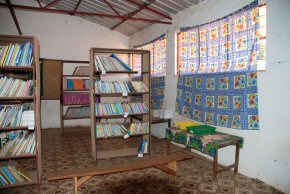 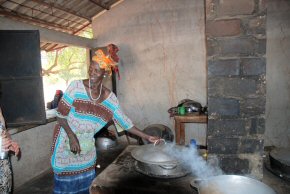 A happy cook with a repaired oven 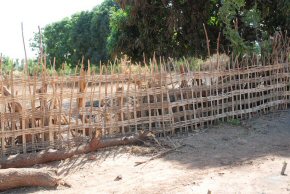 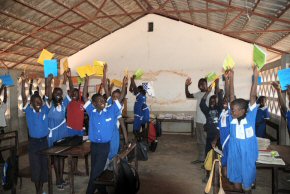 Once again a Pageant team made their upcountry visit to Jarreng and Kanikunda. After a delicious lunch they distributed 27 mosquito nets and other items. Tina and Charlotte kept the children enthralled with songs and bubbles while Wandifa was distributing the nets. They were really impressed with how well the children listened and responded to the songs. They also gave out several pairs of (non-prescription) reading glasses to some of the older men, as they had asked for these on a previous visit. 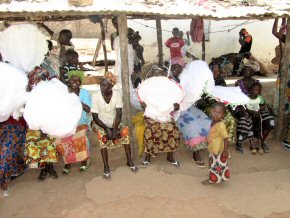 As usual, the trip to Kanikunda meant an early start from the coast. The team left the hotel at 6.30am, with a VERY good packed breakfast, and travelled along the south bank of the river for about 120 miles or so, calling in at Mayork SSS on their way.

The Pageant team arrived at Kanikunda LBS at around 10am, and were welcomed by the Headteacher. They visited on-going projects and discussed new ones, finally deciding on financing a new computer room from Pageant general funds, as a supplementary project to Miriam's funding of the school garden wall. They also delivered gifts of school uniform (donated by Willows Primary school) and exercise books. [Pageant Ethical Gifts]

Kanikunda children with their exercise books

On Miriam's next visit, still more improvements were photographed. 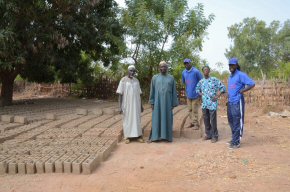 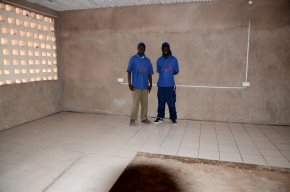 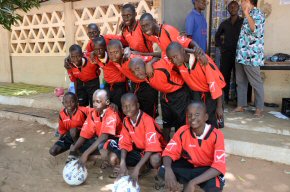 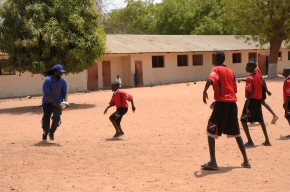 Once again an early start, leaving the hotel at 6am armed with lots of presents and packed breakfasts. but no mosquito nets as the Pageant van was out of service, and the replacement van didn't have a roof rack. The journey was enlivened by a lack of cutlery, but Ellie found a way round this by cracking her egg on the window while others dipped their bread in the butter! The team arrived safely at Kanikunda after 3½ hours on the road.

The new computer room at Kanikunda LBS was looking great, with a tiled floor and all the electrics in place. There are solar panels to power the computers and safety grills on the windows. The photo on the left below shows the room partly finished. The lady at the right is the Headteacher and the three men are the senior members of the school PTA. The photo on the right shows room completely equipped and ready for use. Note the ceiling to lower the room temperature and special security grills inside the windows. 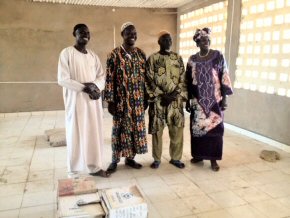 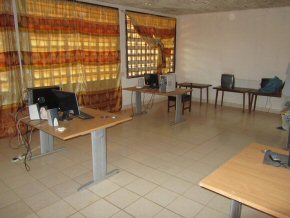 The next project at Kanikunda LBS is a new dining room, with work due to start later in 2014. Further improvements are planned, such as a borehole and water storage tank, but these are on hold until Pageant gets fuller information.