This consisted of 5 marathons in 5 days starting at Ilfracombe in North Devon and ending at Bulford on Salisbury Plain. The event was in aid of the Project 65 The Veterans' Charity. Sarah finished 21st overall in a total time of 20hrs 45mins 53secs, and she was 7th in her classification.
Forces March website and full results]

This is a 30 mile race starting and finishing at Glenelg - just across the water from the Isle of Skye in Scotland. It is mainly on mountain and coastal footpaths and is thus a very arduous race with lots of natural hazards. Sarah describes her race:
"The Lochalsh Dirty Thirty which, if not for its neat rhyme, would be called the Lochalsh Filthy Thirty, or worse. I took a bad fall down a mountainside, slipping on mud deep in a very Brothers Grimm-type dark, sunless pine forest, a fall so bad that I thought for a time that I'd fractured my leg, but I gritted my teeth and finished the race all the same, coming in 2nd lady and 10th overall."
Her time was 7hrs 40mins. She could hardly walk, let alone run, for two weeks afterwards.
[Lochalsh Dirty Thirty website and route details]

This is an off-road marathon of 26.2 miles around the shores of Coniston Water in the Lake District. Sarah completed the race in 5hrs 29mins 27secs, and says:
"...jolly taxing it was too, but oh so beautiful! Tried to look at the views and not just my feet, but didn't always succeed as I didn't want to fall... It was a teensie bit silly to undertake a mountain marathon, but then runners are just a teensie bit silly, and I did it (and without too much pain)!
[Lakeland Trails Marathon website]

This was a double marathon, consisting of 8 laps of a 6.55 mile course, mainly on farm tracks in rural Kent. For more details see the challenge website and map of the course. Sarah completed the 52.4 miles in a time of 12 hours 13 minutes, despite the rain and trouble with her Scottish knee injury (a bad bone bruise to her fibula), which flared up after about 20 miles and meant that she had to walk the last three circuits!

The course is a 10km cross-country circuit at Catton Park in the Staffordshire countryside, and is open to solo runners and relay teams. The winner is whoever completes the most laps in 24 hours. The run started at midday on Saturday 30 July, continued through the night, and finished at midday on Sunday. Sarah was very pleased with her effort, running 120km (75 miles) over the 24 hours. She was 12th solo female (out of 21). Everyone was affected by the heat during the day, but Sarah found running through thick forests in pitch darkness the worst thing and very tiring. She had a lie down in her tent for about 4 hours from 1.30am, resuming when the sun came up. She says it was a fabulous event, and she'll be back next year (with a good head torch) to try to run further and get a better placing! (For an excellent description of the race see this page on the 26.2 Road Runners website)

This is an ultra-marathon of 48 miles. The race started in St Helier at 6am on Saturday 6 August, and proceeded around the coast anti-clockwise. Some of it was on roads, some on footpaths, and some along the beach. Sarah completed the course in 11hrs 36mins 19 secs. Her comment was "managed to run Round the Rock but really felt my 75 miles of last weekend so took it easy and concentrated on just finishing (some didn't) ..... Lots of steep steps up and down, I managed to get lost twice and I did stop for a cup of tea and a scone at St Brelade's!, It was a stunningly beautiful race round the whole island of Jersey. Now for a few days' rest!" See their website for further details of the race.

Sarah has managed to fit in an extra marathon on the Sussex coast. The Seaford Marathon visited Alfriston, the Cuckmere river, Firle Beacon and other lovely spots. This was a hilly and tough off-road race, and luckily hot but not *too* hot. Sarah finished in 5 hours 14 minutes.

This race was in three stages, each of 29-30 miles, following the Thames Path National Trail. See also the Google Maps showing the whole National Trail. Sarah came 14th overall with a total time of 17h 50m 30s. 50 runners started, but only 31 finished the full course. Sarah won the Vet.50 category - a trophy and a new pair of running shoes!

Sarah chose a bottle of Loweswater Gold for her successful attempt on the record at the Chester Marathon. This is a beer brewed by Cumbrian Legendary Ales, who also sponsored her. For a peek at the costume when Sarah first tried it on, move your mouse pointer over the photo of the bottle. 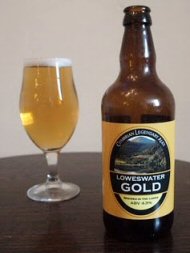 This event took place at Denbies Vineyard, near Dorking in Surrey. The route ran through Dorking town centre, along tracks and footpaths through farmland and across Ranmore Common, before returning through vineyards to Denbies. The marathon consists of two laps of the course. Full details are on the Bacchus Marathon website. Significantly, this was the first public view of Sarah's bottle costume. Sarah writes:

"Well, Loweswater Gold and I partook at the Bacchus Marathon and jolly pleasant it was too - glorious weather, not-so-glorious hills, and 10 wine tastings along the way (I particularly like Denbies' Surrey Gold white wine, but I think Loweswater Gold, being a champion golden ale himself, was a bit jealous and conflicted...) We had lots of fun and attracted rather a lot of attention, and finished in a time of 5 hours 0 mins and 12 seconds. Given the hills and the 10 samples of wine along the way, we were rather pleased with ourselves and are very hopeful of beating the World Record in 4 weeks' time."

Sarah, LG and one of LG's new fans

Sarah's final preparation for the Chester Marathon was the BMW Berlin Marathon. It started and finished near the famous Brandenburg Gate, and passed other notable places such as the Reichstag and Berliner Dom. In contrast to Sarah's other preparation runs, the course was flat throughout. Sarah finished in 4hours 21mins and 22secs, and was placed 309 out of 887 in the Women's 50-55 category. See her detailed timings in the table below.

Sarah writes; "Well done to Patrick Makau for his world record, but no records for me on an unseasonably hot sunny day. I have never seen so many runners in one place, and spent the entire race elbow to elbow and toe to heel with many of the other 40,000+ runners. Any thought of the field spreading out a bit as the race progressed soon disappeared - the finish line was almost as crowded as the start. The runners were so tightly packed that Nick, waiting patiently at the 10 km marker, didn't even see me pass - I was hidden in a human torrent! My Garmin (GPS watch) at the end showed that I'd run 43.4km - the marathon distance is 42.195 km - which is over a kilometre extra, just from weaving round trying to get through the crowds. It was an incredible day though, and I'm proud to be able to say that I have run in the same race as Paula Radcliffe and one in which a new world record was set. Now for a rest before Chester and my own WR attempt!"

Sarah returned to Manchester by bus - a 28 hour journey - much more taxing than the marathon itself!