The 2012 Microscopy and Science Workshops were held simultaneously in two rooms at Gambia College over four days - 11th to 15th February 2012. Gambia College is located in Brikama, a town about 20 miles south of the capital, Banjul, with good tarmac road access. Each room accommodated 20, so each of the 80 student teachers attending spent one day at the Microscopy Workshop and one day at the Science Workshop. The Science Workshops were divided into five topics; Moments, Chemistry, Radioactivity, Electronics and Waves. This report covers the Chemistry Topic.

All Pageant's previous Science Workshops had concentrated purely on practical physics. However, in the 2012 Workshops we were specially asked by Gambia College to include chemistry as one of the topics. The experiments for this topic are listed below. 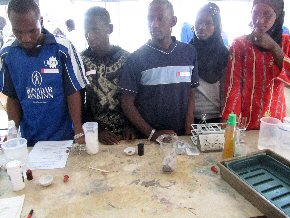 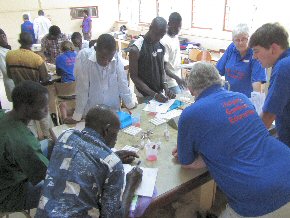 This experiment looked at the chemistry behind the cleaning action of soaps and detergents with hard and soft water.

Many types of chromatography are used to separate mixtures and identify various components of mixtures. This experiment examined the dyes within a coloured ink.

The reaction between iodine and vitamin C (ascorbic acid) was used to determine the amount of the vitamin C in vegetable or fruit juice before and after heating. Starch forms a blue colour with iodine, and so it was used as an indicator for iodine in these determinations. This experiment made a great impression on our helpful driver, Abdoulie. He is now eating much more raw veg and has told his Mum not to cook veg for so long!

Cleaning and Plating with Coins

These simple experiments demonstrated the action of acids on metals and the behaviour of different metals in the electrochemical series, using just coins, vinegar and salt. This was a very successful experiment, so much so that several of the shiny pennies vanished during the day!! Crystals produced duirng the experimant provided good microscope samples as well. (Abdoulie was impressed with what he learned about corrosion from the coins experiment, and is now looking at cleaning up the battery leads of the Pageant car with new-found enthusiasm.) 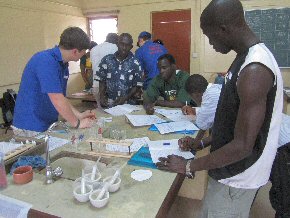 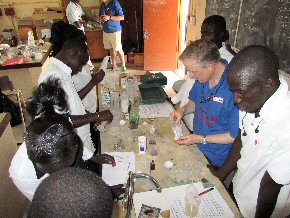 more of the chemistry session

The pH of a solution can be determined using an acid-base indicator. The well known indicator litmus is plant based, being derived from lichen. In this experiment, an indicator was made from red cabbage, and used to assess the pH of a variety of common substances.

A local drink, Wonjo juice, also made a useful indicator. (Wonjo juice, also called sour juice, is dark cranberry-coloured juice, made from boiling the dark red flowers from the sorrel plant. The juice has a very sweet taste and is especially refreshing when ice cold. It is often used to flavour ices. We found it worked better as an indicator when we made it ourselves from the dried flowers, without adding sugar.)

This experiment compared the properties of gases produced by the reaction with acids. Carbon dioxide, oxygen and hydrogen were produced by simple chemical reactions, and some of their properties demonstrated.

In this experiment, cornflour (a carbohydrate) was sprayed into the flame of a candle burning inside a large tin can with the lid on. The resulting small explosion was caused by rapid combustion of the cornflour, which blew the lid off the tin. The reaction dramatically illustrated the conversion of the chemical energy stored in foodstuffs into heat and other forms of energy. It also showed the effect of surface area on the rate of a chemical reaction. This worked pretty well much of the time and made quite a satisfactory 'bang', which caused quite a bit of interest among the College student teachers who were NOT at our workshop.

In this demonstration, glycerol (propane-1,2,3-triol) and potassium permanganate (manganateVII) crystals were mixed together. After a time lag, the mixture burst into flame and gave off clouds of steam. The glycerine experiment was done as a finalé for all the students, outside the labs at the end of the day. The first time Bob did it, it was rather unimpressive, but by the last day he had got it just right, and quite a spectacular little 'volcano' was produced. 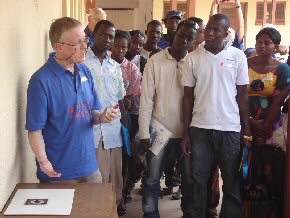 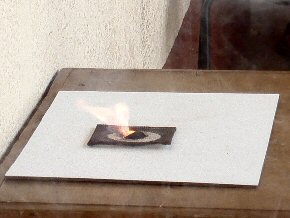