Sarah completed the 2011 Chester Marathon dressed as a bottle of beer in a time of 4hr 33min 59sec. She beat the Guinness World Record for the fastest marathon dressed as a bottle (female). The record was previously held by Gill Begnor from Hook Norton, with a time of 4hr 54min 36sec in the 2010 Virgin London Marathon. Sarah was sponsored by Cumbrian Legendary Ales, and her costume featured their Loweswater Gold bottle label. Read her description of this epic event below.

Congratulations to Sarah on her incredible achievement. Thank you to all who showed their appreciation of her efforts by making sponsorship donations which will help Pageant's work in The Gambia. 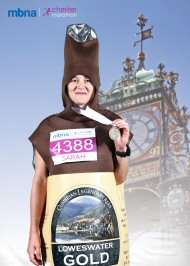 Sarah in her 'bottle' costume

"Gosh, what a wonderful day I had! Even the weather was on my side - it had rained for 48 hours, but race day dawned cool, clear and dry - just as ordered! The forecast was for heavy rain, but it didn't materialise until just half an hour after I finished. The race started at the Roodee, which is Chester's race course. The organisation was magnificent and the lead-up to the event ran like clockwork. Chester Marathon is a very professional outfit! Feeling decidedly nervous I decided not to put my costume on until the very last minute, so Nick and I left the car in the field which was serving as a car park and went to have a look round the athletes' village. At 8.45 I thought it was time to head back to the car and don the costume, but we suddenly realised we had no idea where we had left the car! So I spent the next 10 minutes running at the speed of Usain Bolt up and down rows of cars, with mounting panic and the growing certainty that the WR attempt was over before it had even begun. As you'll have gathered, we did find the car, and I just about had time to pull on the costume and sprint to the start. No time for any more nerves, but time to notice that no one else appeared to be in fancy dress!"

"The starting horn blew, and the elite athletes set off. Those of us much further back had to wait a few minutes to cross the line, during which time I started to realise how much attention I was going to get as dozens of people laughed, expressed encouragement, and asked about both Pageant and Loweswater Gold. Over the next 4 and a half hours hardly a minute passed without jokes, laughs and support from the other runners, the marshals and spectators. Sadly I can't mention all the people who ran with me, made jokes or told me how I was inspiring them to run faster (no one wants to be beaten by a bottle of beer, especially not blokes!), but for example I met a marvellous young man from Malawi who runs a charity out there and was very interested in Pageant. He eventually ran on in front, but as I caught (a few!) people up, quite a few already knew about my charity, so he had obviously been spreading the word. I didn't get his name, but he was a real star. I also got a hug and a kiss from Phil, of www.edandphil.co.uk, who featured me in their last newsletter; Ed had also sponsored me. Another hug came from someone who had seen me in costume at the Bacchus Marathon. And so it went on - the time flew by, and I was overwhelmed by the warmth and encouragement from all around me. The villages of Cheshire turned out in force to cheer the runners, and I received massive attention and, again, lots of questions about Pageant and Loweswater Gold. I think all the talking and laughing, hugging and high-fiveing, was more exhausting than the running!"

"The costume wasn't particularly easy to wear. It became very warm and soggy inside very quickly, but at least the weather was neither hot nor wet. The edges chafed, my head kept getting stuck in the bottleneck, and I won't even begin to describe my attempt to use the Portaloo at about mile 18. However, the Guinness rules state that the costume must be worn every step of the way, and so it was. There were lots of children along the sides of the roads. The older ones would spot me in the distance and start screaming with laughter, whilst the little ones generally stood with eyes agoggle and mouth agape. Loweswater Gold was a little miffed that several small children cheered 'Come on, HP Sauce!' but you wouldn't expect them to be too familiar with real ale bottles. Other children managed to misidentify LG in other ways ('Mum, why's that lady wearing a sausage?'), but the grown-ups had no problem shouting 'Go the Beer!' As Chester Marathon puts your first name on your race number people also shout personal support, which is incredibly motivating." 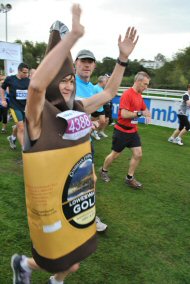 Sarah waves to her fans

Photo by Rob Jeffries of Handbridge.com.

"The last mile of the course is a cruel hill up into Chester, which no one seemed to expect after the flat Cheshire (and Welsh) countryside. Then it was the final sprint through cheering crowds along the River Dee back to the racecourse, and the final furlong really was the final furlong, along the turf to the finishing post right in front of the grandstand. The PA system made us sound like the favourites in the 2.15! The spectators were several deep all along the rails, shouting and screaming encouragement. I already knew that I'd done enough to get the Guinness World Record, but when I saw the finishing post and heard the cheering from the crowds, I managed a final attempt at a sprint. The clock, which gives the gun time, showed 4 hours 36 mins 19 secs as I crossed the line, and my actual time, measured by electronic chip, was 4 hours 33 mins 59 secs. I had beaten the record by some 20 minutes! The MC was waiting to interview me and announce the new World Record to the public. Loweswater Gold and I had done it!" 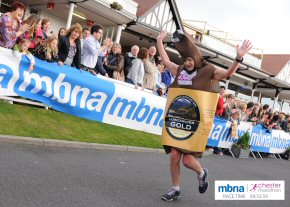 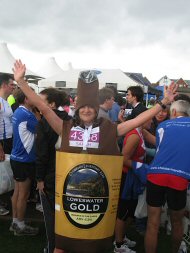 Sarah celebrates with her medal

"Since the marathon lots of folk have been in touch on Facebook to say that they saw me along the way, or that seeing LG was the highlight of the day for their kids, or that I inspired them to keep running. Aren't people wonderful? I hope to keep the fundraising momentum going on the back of all this good will."

"The next stage is to get all the evidence together to send to Guinness. They need official statements from organiser and timekeeper, photos of the race, and video footage. It will take some weeks to get their final validation."

<< Sarah celebrates with her medal

The Chester Chronicle has some photos and a video of the race here. See photo 14, and the video at 55 secs for a glimpse of Sarah.

How money donated to Sarah is being used in The Gambia

Barra-Essau Upper Basic School is in the North Bank region of The Gambia, across the mouth of the Gambia River from Banjul, and not far from the ferry terminal at Barra. Sarah has been helping the school for some time, and sponsors a pupil there. In 2009, she raised £1535 in sponsorship for projects at this school when she ran the Marine Corps 10k race in Washington DC. The photos below were taken when she visited the school early in 2009. 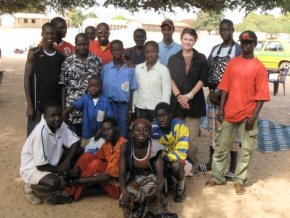 Sarah with staff and pupils of the Barra-Essau UBS 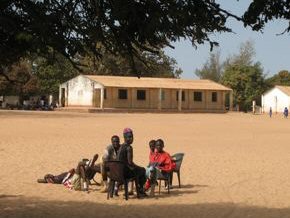 pupils relaxing after football practice at the school

In October 2011, Pippa and Ian visited Barra-Essau UBS during their regular visit to The Gambia. The school has recently moved to new buildings close to the sea. Unfortunately, the budget for the new school did not include for provision of a source of water. There was no piped water or even a well for a school of over 1000 students. Pippa gave headmaster Mr Jallow the remainder of Sarah's 2009 fundraising, plus £175 from her recent Chester Marathon, to pay for piping a water supply into the school compound.

The school did startlingly well in the 2011 Grade 9 exams - they achieved a 92% pass rate in Maths, 88% in Science and 86% in English!! (overall national pass rates are 12%, 11% and 18% respectively) Mr Jallow gave a lot of the credit to Pageant for the Science and Microscopy workshops, as well as materials Pageant had given the school. He said that changes made to the school using money from Sarah's fundraising "made the learning environment much more conducive to good study". Though the school is now in brand-new buildings, there are still lots of things that need to be done, and Sarah's fundraising from the Chester Marathon will help with other rojects at the school. We will keep you up-to-date with progress.

Pageant has had a thank-you from headmaster, Assan Jallow for the water supply which Sarah's sponsorship money paid for: "Am writing to tell you that the taps have been fixed and they started working. The staff and students are all happy. Extend my greetings to Sarah."

Sarah was delighted, and replied: "Wow, that's made my day, my week, my month and probably my year! It's the sort of straightforward, tangible improvement that you can't argue with. Thank you so much for giving it the go-ahead when you were there."

This is the official certificate which Sarah received for her Guinness World Record. 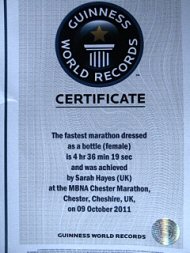 the official certificate
Pageant is a UK Charity - Registered No 1093963