Chestnut Grove is a high-performing, 11-19 mixed comprehensive school in Balham, South London. In March 2008 the school converted to academy status, as a specialised Art College. The school specialises in the visual arts and media, but also covers a wide curriculum, with many students choosing the English Baccalaureate, with its emphasis on the core subjects of English, Maths, Science, Humanities and Languages.

Chestnut Grove first established contact with Banyaka Lower Basic School [Google map showing school location] in The Gambia in about 2003, when some Chestnut Grove teachers went on holiday there. They were captivated by the students and this resulted in a link being set up whereby the students from both schools would learn from each other and also Chestnut Grove would provide help to improve Banyaka School. Since that time Chestnut Grove teachers have taken out lots of stationery and teaching equipment to help the Gambian students learn more effectively. They donated two computers and paid for and installed solar panels to provide the school with electricity. They paid for six disadvantaged students to be aided to go to school for a year. They had discussions with the Gambian Education Department which resulted in new classrooms being built, new toilet facilities and a stand-pipe to provide clean running water.

In 2009 Chestnut Grove strengthened their connection with Banyaka LBS by linking with Pageant. Each year they undertake a fundraising event, and the money raised from that is now channeled through Pageant. They had a planned event in May 2010, and as a preliminary, on 8th December 2009, the students undertook a question and answer session with people having an interest or expertise in the chosen issue - 'The rights of children to an education'.

Ian Howard attended this event on behalf of Pageant and took part in the question and answer session. He explained exactly what Pageant had done in the past to help improve the education of students in The Gambia. He came away with a very generous cheque for £500, £280 of this was used to sponsor two children at Banyaka LBS under Pageant's Sponsorship Scheme.

Chestnut Grove pupils have continued to sponsor Michael and Fatou each year since. They are now (2012-13) at two different senior secondary schools (SSS) – Michael is at SOS SSS and Fatou is at Mayork SSS. They are both specialising in Science, and we have updated their photos.

There are some other children sponsored by Pageant members who are still at Banyaka LBS, so Pageant visits the school on a regular basis, usually twice a year. We have always found the school to be well run and that the head teacher and staff make the most of the assistance that Chestnut Grove and others give them.

£15 was used to pay for the school's membership of Pageant and the remaining £205 was used for a small project at Banyaka LBS. In February 2010, at the request of the head-teacher, a few sheep were bought, with a view to eventually having a small flock to help raise funds for school materials. (Sadly, this was unsuccessful, as a form of 'sheep flu' was prevalent in parts of The Gambia that year, which killed off many sheep, including those at Banyaka.)

The Chestnut Grove Year 10 students again decided to support Pageant, funding the same two students, who were then starting the equivalent of their GCSE year. (We were delighted to find that Michael had been made a School Councillor.) When Ian and Pippa visited Banyaka LBS in October 2010 it was decided, again after discussion with the head teacher, to spend the remaining £612 on fitting windows and floor tiles in a new building, currently used as an overflow classroom, but eventually to be the school library. A Pageant team returned to Banyaka LBS in April 2011 to find that the windows and tiling had been done and the building looked considerably better. Since then a group of Guides with their leaders has spent some time at Banyaka and made a further donation for the library. [more photos on the Banyaka web page] 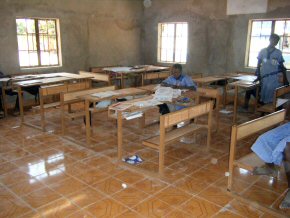 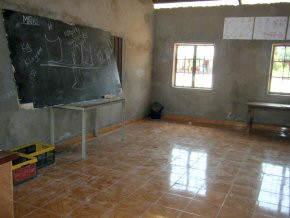 Pippa and Ian visited Chestnut Grove School again, to answer questions from the new Year 10 students, and to receive another generous cheque for the money raised by LAST year's Grade 10 - we will be taking this out with us later this month. Michael and Fatou are now in Senior Secondary School (roughly equivalent to Sixth Form College), but even after paying their increased fees (a total of £380) there will be £465 for a small project at Banyaka LBS. We will report back as to what the money will be spent on this time and with some new photos of Fatou and Michael. We were delighted to find that this year's Year 10 students have again chosen to support Pageant with their fund-raising this year - our thanks to them and to all at Chestnut Grove School.

May 2012 - Flourishing garden & work on new toilets at Banyaka LBS

During the school year 2010-2011, Chestnut Grove raised £865. Some of this paid for the sponsorship of their two students, now in Senior Secondary School. £465 of the money raised was used to start work on a new toilet block. In April 2012, the below ground works (settlement tanks) had been completed. Above ground works (the actual building) will be started when funds allow. The photos below show the vegetable gardens and the high quality of the workmanship on the settlement tanks. [see more photos of vegetable gardens and settlement tanks] 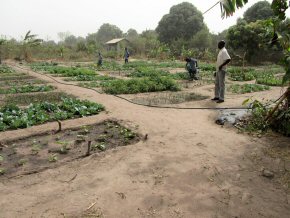 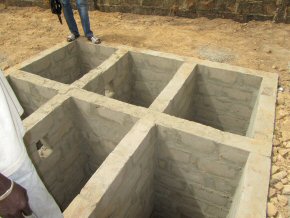 Chestnut Grove held a Comedy Evening on 11 October 2013, with many well known comedy stars performing for free. This raised a lot of money, which will be split between Pageant and another of Chestnut Grove's projects. (We will post details of the amount raised later.) Read Pippa's report on this news page.

Update May 2015 - Another Comedy Evening

Another successful Chestnut Grove Comedy Evening was held on Friday 6 February, with a line-up including Arthur Smith and Elliot Steel. The proceeds were split between a fund for replacing equipment in key departments at the school, and projects at Banyaka Lower Basic School in The Gambia. We have now received a very generous cheque for £1,000 from the Friends of Chestnut Grove as Pageant's share, and we will discuss with Banyaka LBS how the money will be used during Pageant's next trip. Some may go towards sponsorship of needy pupils.

The following amounts have been raised by Chestnut Grove at their annual fundraising events, and channeled through Pageant to sponsor children at Banyaka LBS, and for projects at the school.