This page has been archived, and won't be updated

The Foundation for Disabled People, a Registered Gambian Charity, was set up in 2001 and operated in The Gambia until 2013. Mr Opesan Gabriel Kenny, founder of FfDP, has returned to Nigeria, where he has set up the Kenopyso Foundation. We do not have a link to any website and have no details of their activities. We are keeping this web page on our site for information, and as a tribute to the magnificent work done my FfDP.

FfDP started production of specialist wheelchairs in 2003 with support from the British High Commission in the Gambia. Early in 2007, the Foundation's workshop provided one of Pageant's sponsored students, Sarjo Badjie, with one of their wheelchairs. Read all about Sarjo's story. 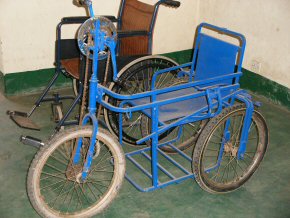 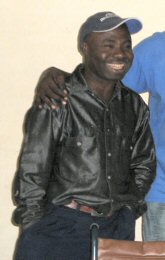 Conventional wheelchairs based on European or American designs are of limited use in developing countries such as The Gambia. They are entirely unsuited to use outdoors on unmade roads. They quickly fail under these extreme operating conditions, and are difficult to repair, due to the lack of spare parts, and lack of the specialist welding equipment needed for alloys. The Foundation has designed a special "all terrain" wheelchair, with three large wheels, powered by hand cranks and chain drive through the steerable front wheel. The frame is constructed by welding readily available steel tubing and plate. The connection between the main framework and the head tube which holds the front wheel is on one side only, allowing easy access to the seat. There is also a large rack under the seat for carrying things. Each wheelchair is made to measure for its recipient and a cushion is also provided for added comfort.

Other items are made in the workshop, usually to order - we saw a batch of laundry baskets being made for some of the hotels. The Foundation also has a computer training centre for people with a physical handicap - the initial batch of computers was provided by Pageant member Keith Farrington in 2004-5. This allows people to get the chance of earning their own income.

The Foundation benefited from sponsorship raised by team opnaarDAKAR in the 2006 Amsterdam-Dakar Challenge. (Team website) Unfortunately these sites are in Dutch, but you can use online translators to make a rough translation into English. The team consisted of Niels Spitters and Nienke Klaassen. They raised sufficient money to sponsor production of a batch of wheelchairs, and expand the computer training activities. Nienke had a particular interest in helping disabled people in The Gambia, as she works as an Ergotherapist, aiming to improve people's functional activities by training and the use of special equipment.

Pageant has set up this page to help to publicise the activities of the Foundation, and hopefully get them support and funding from UK organisations. Please read the 2007 Proposal (PDF), which is an edited version of a document prepared by the Foundation, putting the case for further funding to enable them to continue and expand their work. If you can help in any way, or would like further information, please contact Pageant or contact the Foundation direct as shown at the bottom of this page.

During his year of office as Mayor of Haslemere, Brian Howard named Pageant as one of his chosen charities. (More about the Mayor's fundraising) £3700 was raised for Pageant, and £2500 of this was donated to the Foundation to make wheelchairs for disabled students.

During their recent trip to The Gambia, Pippa and Ian visited the Foundation's workshops to see the wheelchairs under construction. When the wheelchairs are ready and the students who are to receive them have been selected, Gabriel will contact Wandifa so that he can attend the presentation ceremony.

These photos show a disabled man working on a wheelchair in the workshop. The director, Gabriel, is standing watching. 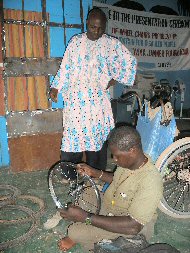 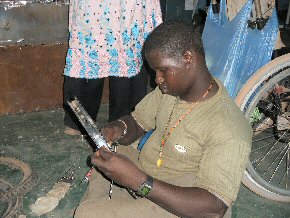 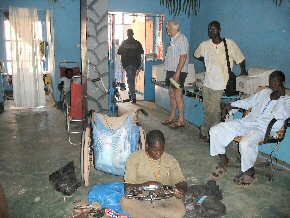 6 April 2008 - Preparations for Handover of 16 Wheelchairs

Pageant received news from Mr Opesan Gabriel Kenny, the Director of the FfDP, about the handing-over ceremony for the 16 wheelchairs built for the disabled students with the money from the Mayor of Haslemere's fund. Gabriel writes:

"I am highly pleased with great pleasure to inform you that the wheel chairs would be released to the beneficiaries on Tuesday 8 April 2008. The little delay is because we want the Mayor of Banjul to attend the program but he travelled out for three weeks. The following people will be present at the handling over:

I hope is going to be a remarkable day."

Gabriel sent us the following update and photos of the handover ceremony on 8 April:

"Thanks for your support to my organisation. Yesterday's program was very interesting and the attendance was good. Ann Keating represented Pageant and made a good speech. All the national newspapers were in attendance and the national television came to cover it. This was good publicity. We look forward to further support, most importantly for the education of disabled students. Thanks once again." 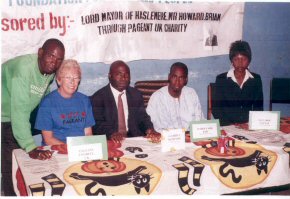 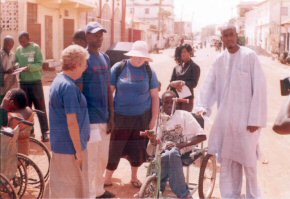 street scene outside the FfDP workshop

Mr. Gabriel Jarju, representative of the Social Welfare Department, left before this photo was taken.