How things get to the Gambia - News Archive

This page is an archive of some deleted news pages which describe how Pageant packs containers and pallets, sends them to The Gambia, and distributes the goods there. Because it is an archive, we cannot guarantee that any information or links are still valid.

The latest consignment of goodies for the schools, children and projects arrived in The Gambia in April and was distributed to the recipients. Among the many boxes of items were 12 mobile storage units, 3 metal cabinets, seven typewriters, a sewing machine, over 1,000 exercise books, a volleyball net, large quantities of stationery and craft items, two bicycles, reference and other text books, automotive and carpentry tools, more than 100 pairs of spectacles, many boxes of paper and about 2,000 pens.

Kemo assisted with the unloading and distribution of the items, and organised a lorry to take many of the items to Bakalarr school - it all took such a long time that the lorry only just caught the last ferry.

Kemo has asked us to say that all the recipients were delighted with their gifts and wish to thank all the contributors for their generosity, time and effort in getting all the things collected and packed up. He says that he was amazed at the amount and quality of the things that he was distributing.

The latest consignment of equipment and supplies for schools in the Gambia is on its way. 71 boxes of goodies sent by Pageant are being sent in one of the FROGS* containers.  The goods are going to five schools, two colleges, the University in Banjul and several villages.  Pageant also sent desks, cupboards and a bookcase to Bakalarr school. Pageant assisted with the loading of the containers, and they are due to arrive in The Gambia for unloading and distribution in mid September.

* FROGS - Friends of Gambian Schools, 01634 862365, is a UK Charity which helps over a hundred Gambian Schools by shipping 40 foot containers of supplies to The Gambia. 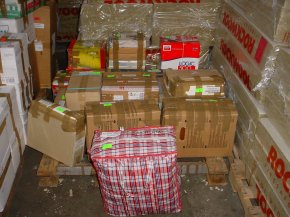 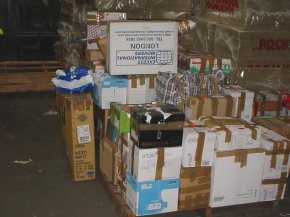 The goods ready for packing. Packages for Bakalarr have green labels, and the rest with red labels are for distribution by Kemo. 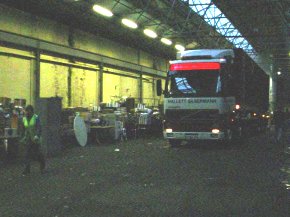 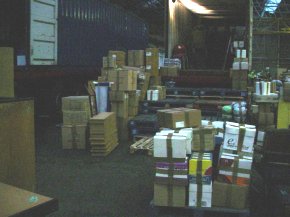 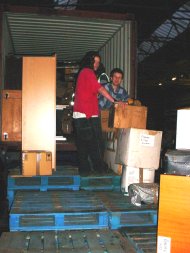 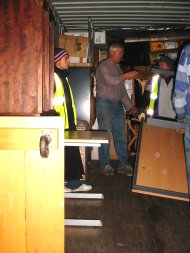 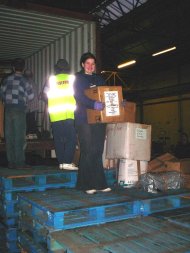 Chris, Craig, Ian, Frances and other helpers loading a container.

Another consignment of goods has been packed for dispatch to The Gambia. Here are some pictures of the packing of the containers on Saturday 24 July 2004. Packing starts at about 9am. Some of the items waiting to be packed 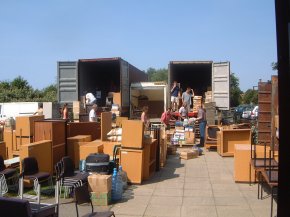 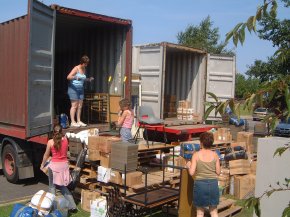 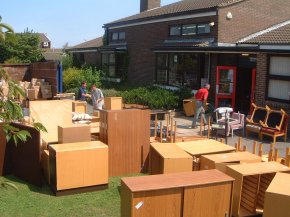 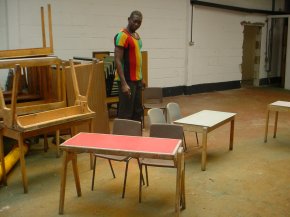 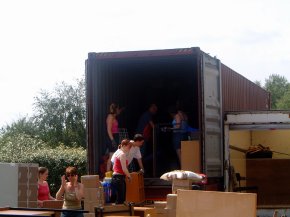 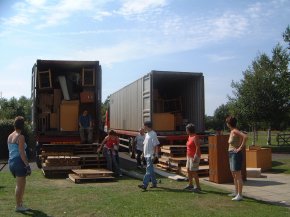 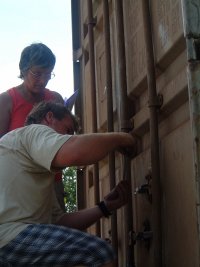 4:15 - fixing the seal on the last container

Pageant would like to thank all the volunteers for their hard work in packing these much needed supplies, and Chris Robertson, who avoided some of the hard work by taking these pictures.

On Friday evening we loaded up all the Pageant packages into the van we had borrowed from ERA - we measured our load as 9 cubic metres, which is a pretty large volume. Our grateful thanks go to Craig and Dustin who helped us load up - the extra help meant that we finished at 8.15 pm (instead of the early hours of the morning as on a couple of previous occasions!)

We also loaded some very special packages into Andrew and Kathy's cars - these contained an amazing total of 42 compound optical microscopes, which we will take to Banjul University, the Banjul Teaching Hospital and several of 'our' Secondary Schools. These high quality microscopes are illuminated by a tilting mirror system, ideal for The Gambia with its electrical supply problems. 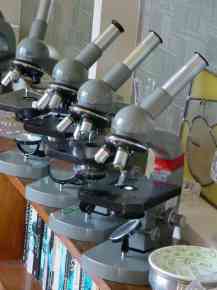 Microscopes waiting to be packed

The microscopes were donated to Pageant by Leeds University (which has replaced them with similar instruments with an integral light source). Our special thanks go to Pauline Hick, Teaching Laboratories Co-ordinator at the School of Biology of Leeds University, and to my long-suffering service engineer Richard, who was kind enough to collect them, store them in his garage and then deliver them to us when we were ready to ship them.

On Saturday morning we left home at 6.00am and arrived at Aylesford just after 7.00am - our thanks to John for getting up so early to drive down with us and help load. As well as helping with FROGS packages, we had unpacked the entire PAGEANT vanload and re-packed it into the container by 9.30am, at which time Kathy and Andrew arrived with the microscopes - perfect timing! We stayed on to help the FROGS load their other container until 11.00am and then had to leave - and Helen deserves a particular 'thank-you' for her packing efforts, a real star performance!

It seems that the FROGS may continue to send out containers, but in a much-reduced manner - no furniture or large items, for example - and we are not sure how much we will be able to send with them. We will keep in touch with the re-organised committee and will also pursue other ways of sending materials out to The Gambia.

Kemo has just sent us some pictures of unloading the latest containers to go to The Gambia. The unloading was carried out at a school in Bakau New Town. Pageant members Amy Montgomery and Amanda Carley have travelled to The Gambia to assist with teaching in one of the schools which Pageant helps. Kemo reported that they both helped with the unloading: "We have unloaded the containers yesterday (13 April) and both girls really worked very hard though the temperature was high. Mr Gitteh and his team also came, plus Crab Island, St.Augustines, Wesley and Abuko LBS who feel so pleased with their chairs and some boxes that you have sent for them. Amy and Amanda will start their teaching lessons on this Monday coming. And I hope they will explain you a lot when they come back." 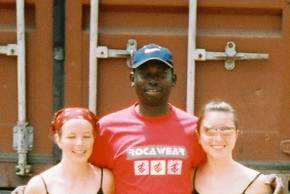 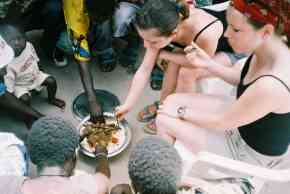 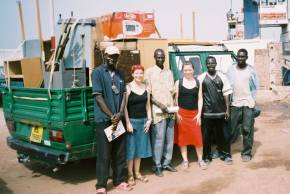 truckload of goods for Bakalarr After unloading, goods for Bakalarr were transported by truck. The picture above right shows some of the Pageant team waiting to board the ferry across the Gambia River. The Bakalarr headmaster, Mr Gitteh, stands between Amanda and Amy. The goods for Abuko, a much shorter journey, went by donkey cart. The load consisted of small chairs were donated by a school in Crawley, West Sussex and some boxes of school stationery, pens, pencils etc. The Headmaster, Kebba Ngumbo Sima, has written to us:

"It has taken us great surprise and a lot of excitement in receiving these strong and nice 35 chairs for our school... as well as some boxes of learning materials. .... With the usage of these chairs presently, one afternoon shift class is now brought to the morning session leaving only one class more in the afternoon shift."

Amanda and Amy should be back very soon, and we hope to be able to a lot more pictures and news about their visit. (more about Abuko School) <<  jumpers and cardigans for Wesley school

Four suitcases-full of jumpers and cardigans were donated by an Isle of Wight school that was changing its uniform. This picture shows them being unpacked and checked at Wesley Primary School

During the past two weeks we have been packing more gifts to send to our schools and associated village communities, the impetus for this latest load having been provided by a second donation of furniture and ride-on toys by Bramley School in Surrey. This was a gift that we felt we just had to send out as soon as we could, despite the problems we have with storage and the cost of transport.

With assistance from three of our stalwart members (a huge thank-you to Amanda, Craig and Chris) we packed just over 7 cubic metres of goodies onto four pallets. 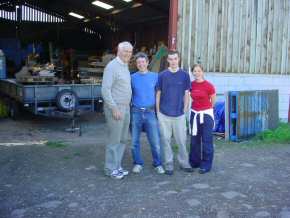 packing the pallets - Ian, Chris, Craig and Amanda outside the barn 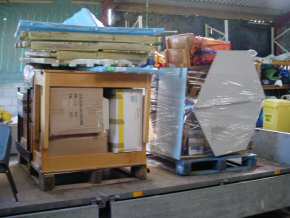 two of the pallets partly packed transporting the pallets - Tim Bailey in the blue shirt

We were very fortunate to be lent some space in a barn belonging to Pageant member, Tim Bailey. We were doubly indebted to Tim, as not only had he collected and stored the nursery school furniture and other goods for us, but also used his trailer to transport the four pallets to the shipping agent in Crawley for us.

Tim and his wife Deborah run County Marquees in Southwater - please contact them on 01403 731891 if you are wanting to hire some excellent quality marquee space for a function in the Surrey/Sussex/Kent area.

The goods are due to arrive in Banjul in early November and we will make sure that we have some photos taken of distribution at the Gambian end of the journey. This shipment has used up (in fact, it has slightly exceeded!) our agreed annual budget for transporting goods, so we will not be sending anything else by container for at least another six months.