This is a slightly edited version of a report written by Nick Taylor about how he helped schools and communities in the Soma area with funds he had raised in his 'Give to Gambia' project. 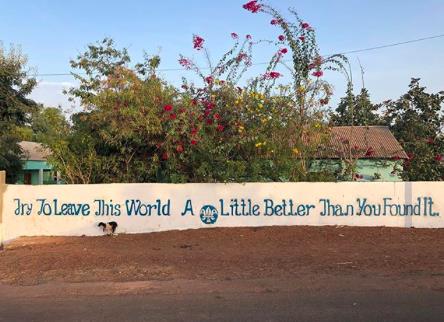 I had the pleasure of spending an amazing week with a great group of people, and immerse myself back in the Soma community that I last visited in 2015.

So whom did I go with? Well, I was very lucky to go with an amazing group, none of whom, I had met before this trip. So although I was slightly nervous heading to Gatwick, I was excited to meet everyone. The group consisted of a number of teachers (and their various family members) from All Saints School (Fleet, Hampshire). The school has a fabulous 'Learning through Friendship' project set up with Soma Lower Basic School, which was set up over 15 years ago, and has looked to help transform the facilities within the school ever since the project started.

There were also teachers from Harmans Water School in Bracknell, who hope to set up a strong link similar to All Saints at Soma New Lower Basic School. I also had the pleasure of visiting with Marion Christmas MBE, who is the founder of Kario Konko Scout Lodge and Fellowship, which is also where we stayed during our trip.. Kairo Konko has been at the heart of transforming many lives for the better. We were even honoured to have the visit of Dame Mary Fagan, who was the Lord Lieutenant of Hampshire for over 20 years before retiring in 2014.

Moving on, so what did I get up to? Well, I was fortunate enough to raise in the end just over £3,800, which I was chuffed to bits with, bearing in mind my original target was £2000. Before I went out to Gambia, I had quite fixed aims of how I wanted to spend the money, such as on school resources, mosquito nets, football equipment, repairing a well, and donating to the Kario Konko rice fund. However, the beauty of going out there and seeing things first hand, allowed me to reassess on what was in need the most. The heart strings were also tugged a few times too! For example, we followed through with all the projects I had intended above bar one, which were the mosquito nets. The rationale behind this was that after heading out there and speaking to Lamin Kinteh MBE (who is the director of Kairo Konko, and one of only three Gambians to have an MBE), it became clear that mosquito nets were not required at the moment. This was due to the fact that the rainy season has just finished, and because Soma has been receiving large donations of mosquito nets from UNICEF for the last two years, the nets are in such high supply that the villages have started to use them as chicken netting and fishing nets. As a result, we decided to reallocate the money we were due to spend on the nets to other areas of need :)

So, if you would like to see how we made a difference then please see below:

Rice, onions and oil for schools

Why
The local schools had been receiving donations for school lunches from the World Food Group, but those donations stopped at the start of February meaning that 1000s of children were not receiving a much needed nutritious meal, affecting attendance and child welfare.

Impact
Donated 10 bags of rice, 2 bags of onions and 2 drums of oil to: Sitahuma, Fonfoi Kunda and Jabisa Lower Basic Schools. Meaning that 600 children are being fed every weekday for 6/7 weeks. 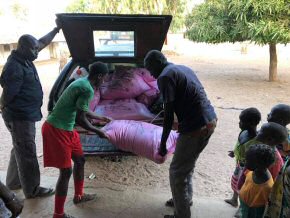 Bags of rice being unloaded

Why
If children don't have a pencil or workbook, then they simply don't work.

Impact
Donated enough workbooks and pencils for every single child at Soma Lower Basic and the same three schools that benefited from the rice fund. This means over 2,000 children will now have an essential workbook. Other resources such as, ample amounts of white and coloured chalk, blackboard rulers and vanguards (A3 card) were also given. 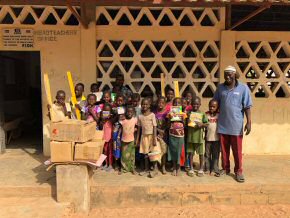 Children with their workbooks and pencils

Why
Local animals were eating the vegetation in the school garden - a vital resource of food that the school relies on.

Impact
The school will now be able to produce crops without the fear of animals coming in and eating them. 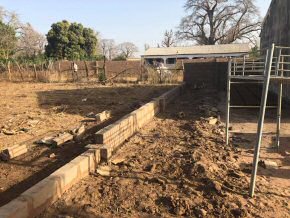 Why
The school drinking well at Sitahuma was severely damaged, and had fallen into disrepair with major works required. Due to this, it has meant children were not able to stay hydrated, affecting their concentration levels when learning and their general health

Impact
The well is under-repair as we speak, and I hope to hear of its completion in the near future. This is a photo of the well before repairs started getting underway. 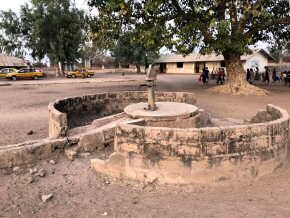 Football jerseys for a local academy

Why
A recently established academy in Soma, Soma Hart FC Academy, has been providing many children with an opportunity to play football. However, in order to get to the next step, they required matching jerseys to help improve their appearance.

Impact
The academy was provided with an Adidas playing kit (18 outfield playing shirts and 2 goalkeeper kits), which will mean on match days they aren't all turning up in completely different gear, giving them a much higher profile in the community.

Nick with some of the kit >> 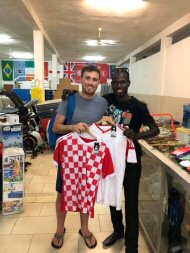 Nick with some of the kit 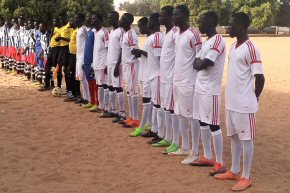 The team in their new kit 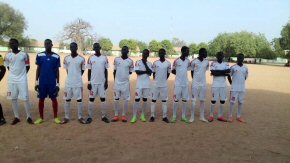 Why
In some classes five children were being squeezed onto 2 seater tables, meaning they were learning in uncomfortable conditions, inhibiting concentration

Impact
The money will fund 10 tables to be repaired, meaning that the classes will now have adequate seating arrangements. 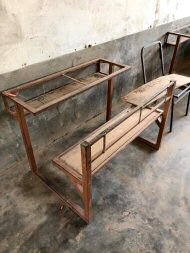 Why
Large family homes had come under need for repair having been damaged by the wet season.

Impact
The families were provided with corrugate to start the repairs required, giving them more safekeeping and security, not worrying about their homes literally falling apart.

Why
A local school library had a recent bat infestation in their recess ceiling. Although the bats were removed, the holes in the wall where they originally entered through was still prominent. Bat excretions were also a health risk to the children and staff.

Impact
The gaps in the wall have now been filled, meaning that bats can no longer enter and create their home in the school's library. 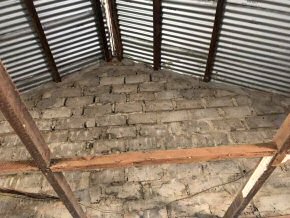