Peace Corps Volunteers in The Gambia

The Peace Corps is a volunteer programme run and funded by the United States government. It was established in 1961, with the objective of promoting world peace and friendship. Today it has around 7000 volunteers and trainees working in 65 countries around the world. These numbers were correct at September 2013. For the most recent data please check the Fast Facts page on the Peace Corps website. Peace Corps Volunteers (PCVs) are US citizens with a college degree or other professional qualification. They work in their host countries for around two years and sometimes longer. Almost half of Volunteers work in Africa, and more help with education than with any other area.

Pageant has recently funded projects in up-country schools where Linda has placed Peace Corps Volunteers to assist the head teachers. The Peace Corps does not provide any money for the volunteers to use on school projects, so Linda suggested that Pageant might be able to help with some funding. The PCVs submitted outlines of the projects that they felt would help their schools together with estimates of the costs involved and these were considered by Pageant's Trustees. Details of the successful projects follow.

We are really pleased that Pageant has been able to help these up-country schools, and we hope that we can co-operate with the Peace Corps again if similar opportunities arise. In most cases our only contact with these schools is through the PCVs, so we are very dependent on them for the information we publish about these schools.

Pallol is a village in the Central River Division on the North Bank of the Gambia River, not far from Janjanbureh (Georgetown). It is about 5km off the main North Bank Road. Pallol Lower Basic School was built in 2006. Since then extreme weather had resulted in damage to roof tiles, and leaks causing damage to classrooms.

Peace Corps Volunteer Laura Osterman worked at this school, and requested help from Pageant to repair the roofs. Pageant gave the school £400. They used this to re-roof the kitchen and toilet roofs with corrugated sheeting, so that tiles from these roofs could be recycled to repair the roofs of the main classroom block.
more details on our Pallol LBS page 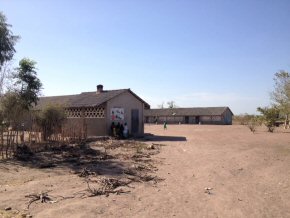 Yallal Tankonjala is a village about 8km west of the town of Farafenni in the North Bank Division. The Peace Corps Volunteer at Yalla Tankonjala LBS is Laura Lyons. Her major project at the school has been re-organising the library and resource room. Pageant gave £485 to help with materials and building work to renovate and re-equip this facility. The photos below show the resource room/library after its renovation. Laura has sent us a very detailed report about how the resource room is used by staff and students.
more details on our Yallal Tankonjala page

Pageant gave Laura £155 towards matrials for an extensive programme of painting murals on school walls and throughout the village. These are highly visible and offer informal learning opportunities both for pupils and villagers. You can see more photos of these murals on this second Yallal Tankonjala page 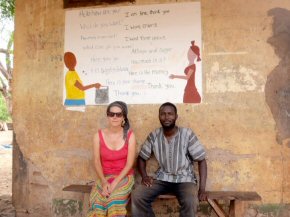 Misera is in the Jarra West District of the Lower River Region. Its nearest town is Soma. The PCV at Misera Basic School is Jacinda (Jacy) Bowman. She has been at the school since September 2013 and will probably stay until the beginning of 2016. She is a prolific blogger, and Jacy's blog has lots of photos of Misera. Jacy organised an excursion to public libraries and other places of interest in the Kombo and Banjul areas, so that the Library Committee and Library Monitors could see how these libraries operated. Throughout the year, the excursion was used as an incentive for the work done in the library. Pageant helped to fund this trip with a gift of £173.

In November 2015, a party of Pageant members visited Misera BCS to meet Jacy and see her library and resource room. Some microscopes were given to the school and teachers trained to use them.
more details on our Misera page

boarding the bus for the library excursion 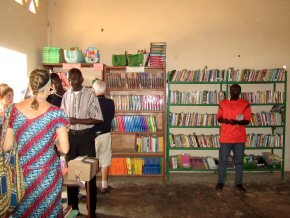 Lebba (sometimes spelt Leba) is a village in Upper Saloum in the Central River Division. It lies close to the North Bank Road a few km west of Panchang. Lebba Lower Basic School was opened in 2008, and moved into new premises in 2011, with the old school converted into staff accommodation. Pageant has given the PCV at Lebba £68 for materials to paint some murals on the school walls.