Sarah's association with Pageant started with this race, when she raised sponsorship to fund projects at Barra-Essau Upper Basic School in The Gambia. The 34th Marine Corps 10k race took place in Washington DC on Sunday 25 October 2009. This race immediately followed the Marine Corps Marathon, and followed part of the same course through the streets of the United States capital city. Sarah has had a close association with Barra-Essau UBS for some time and continues to help this school in many ways. See more details on Sarah's main page.

Sarah did quite a bit of hill training in Italy, including an ascent of Montecorona, near Umbertide in Umbria, running a steep 11.75 km in 78 minutes in 90 degree heat. Ouch!! She then ran the races listed below in preparation for the Marine Corps race:

Sarah in the Great Edinburgh Run

Sarah completed the 10k race with a chip time of 49 mins 18 secs, equalling her personal best. She came 7th out of 203 in her division. She already had pledges of support from around the world, and then raised an amazing total of £1470 through Pageant. Below are some of Sarah's pictures of the race: 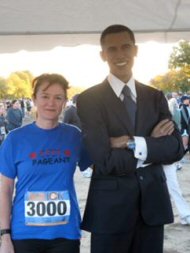 Guess who saw Sarah of 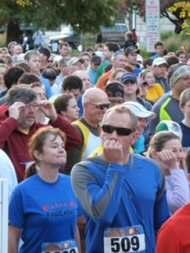 the nerves are showing 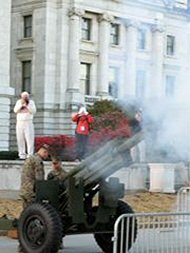 the starting gun is bigger than usual 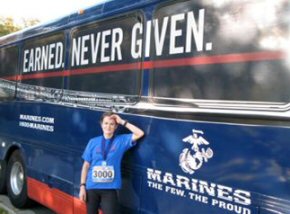 done it! Sarah after the race 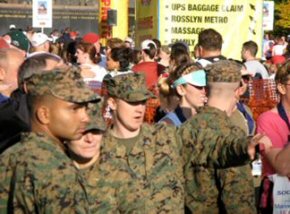 the Marines who looked after Sarah and the other runners

Sarah's final sponsorship total was £1535. Barra-Essau UBS have spent this money on new classroom benches, upgrading the staff room and the library (new table, flooring, ceiling, chairs for the former and new
flooring, ceiling and bookshelves for the latter) and several sets of strip for school football and athletics teams, footballs and some tracksuits for the PE staff.

Mr Jallow, the Barra-Essau UBS headmaster emailed us:
"The athletes performed well (at the Schools National Championship) for the first time in the history of the school, 2nd in the region and 13th nationally. Everybody is happy about the jerseys even the villagers. To inform you, the school will host the football gala in June 2010. Say hi to Sarah and family and inform her about the performance of the school.