In 2004, Viv Morris, the Head teacher of the Dame Tipping CE Primary School in Havering-Atte-Bower, Essex, contacted us having read about Pageant on the website. She was looking for a way of sponsoring two children in The Gambia and decided to approach us to see if we could arrange things for her.

After some correspondence and discussion she decided that the school would sponsor two little brothers, Abdoulrahman, then aged 5, and Yusupha, aged 4. As Kemo was coming to visit us we suggested that he should come with us to give a talk to the children and this offer was duly accepted. 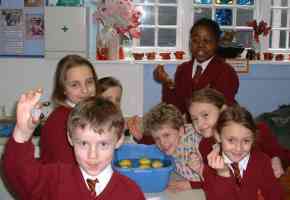 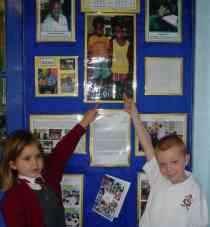 During our visit to the school in 2005 we were told how the sponsorship would be raised. The children would themselves devise games and competitions and charge each other to play them. This would go on for a large part of the Spring Term, being a source of great activity and enjoyment to teachers and children. In 2005 the games included:

with the children managing to run at least three activities each lunchtime.

Their aim was to raise £180 for the boys' sponsorship, and at the beginning of April, Viv sent us a cheque for £210. Some of the 'extra' money would be used in September, when the Gambian school expenses are at their highest and family income is low, and the rest for some special things for the families to enjoy at Christmas.

Since this page was originally published, Dame Tipping School has continued to raise money in various ingenious ways, and still sponsors children in The Gambia through Pageant's Sponsorship Scheme.
(read more about Dame Tipping School on their website)