Christ's Hospital, a boarding school near Horsham, West Sussex, is a Charitable Foundation established by King Edward VI by a Royal Charter dated 1553. (see the school website) The school, known familiarly as CH, is dedicated to providing a stable background and boarding education of high standard to boys and girls, having regard especially to children of those families in social, financial or other particular need. Each term CH has a Chapel collection in aid of selected charities and during the Lent term of 2005 this collection was donated to Pageant. 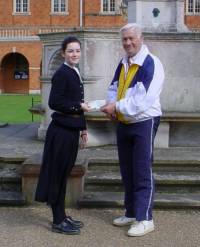 In 2005, Ian made a presentation to both junior and senior chapel meetings at the beginning of the Lent term, to inform the CH pupils of the work that Pageant undertakes and to show them the amazingly poor state of most of the school buildings in The Gambia.

This photograph shows a cheque for £750 being presented to Ian Howard by Emma Topolski, one of the Grecians (CH terminology for Upper 6th or Year 13). In addition to this cheque, a further £100 was donated to Pageant in relation to the Chapel collection and more funds were raised at a Rugby Sevens Tournament (£131) and by sales of the in-school magazine Politico (£30.86).

In addition to this, the boys of two of the CH houses, Peele A and Peele B, were sponsoring a student in The Gambia. They had been supporting Alieu since 2004, when he was at Primary School, and raised the money for his schooling by organising an Arts Festival in the School Theatre each summer term and getting sponsorship for participation in the annual school steeplechase.

As well as sponsorship for Alieu himself, money raised by the students has been used for Alieu's new school, Ndow UBS in Bakau. The most popular suggestions by the CH pupils themselves were football kit and science equipment, so two complete sets of football kit complete with kitbags and several footballs were taken out to the school in October 2006.

Science kit was bought in conjunction with the Collyer's Beacon Science initiative - Ndow UBS was one of the schools chosen to benefit from the Practical Science seminars and received an extra quota of Science kit on the strength of the CH contribution. 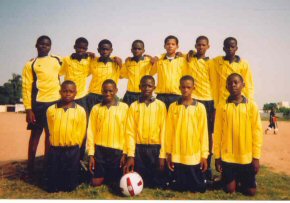 We would like to take this opportunity of thanking the entire CH community for their generous support of Pageant - they are certainly increasing the range of their care for 'children of families in social, financial or other particular need'.