For some time Pippa's sister, Tina, has been keen to do some art-work with a couple of the Nursery schools that we have been helping. This February she and her daughter, Frances, had gone into action and had done some advance preparation to enable our Pageant group to help the children to make and populate a jungle at Kings Kid Academy and an ocean at KMJ Nursery.

This meant that, as well as all the other things in their luggage (like vast quantities of science kit and a few clothes!), they had brought some rolls of strong brown paper, powder paints, sponges, brushes, scissors and colouring pens and pencils to take to the selected schools. As well as these they had prepared and drawn a wonderful collection of jungle animals and sea creatures on strong white card, all ready to be coloured and cut out, plus some sheets of coloured cellophane and crinkly paper to add depth to the finished works of art.

The first school to take part in a Tina art session was King's Kid Academy (KKA), which we had arranged to visit one morning to see the progress on their building work. Read more about KKA on its own web page, and also see pictures when Plymouth-Banjul Challenge teams Desert Mice and First to the Bar visited KKA. The school was expecting us - but the jungle was a complete surprise! 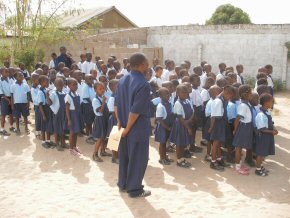 We explained to the headmaster what we wanted to do. Somewhat surprised, but willing, he allowed us to take all the nursery school classes into one of the larger classrooms and Tina set about organising both us and the children into groups doing various things which would eventually be put together to make the jungle.

Now, one has to realise that these children have NEVER had any art materials to use before. They may have been able to use a few coloured pencils from time to time, but... dipping sponges into dishes of bright squidgy paint and then being able to press them onto large areas of paper; using big brushes to dip into bright paint and make patterns / splodges; colouring lots of animals with felt-tips / paints; glueing things onto other things; and being able to do all these thing all together with lots of grown-up toubabs (white people)... all this was SO much fun when they realised that, yes, they really could do these things themselves. The teachers were as excited as the children and entered into the project with great enthusiasm. 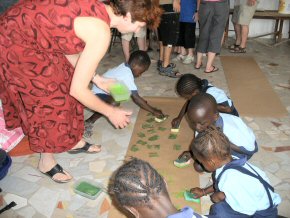 the jungle is started 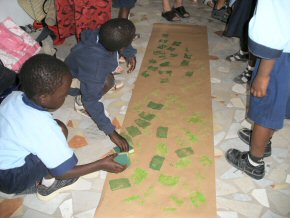 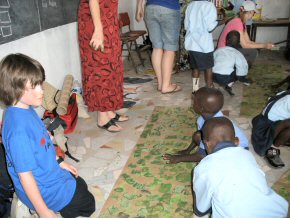 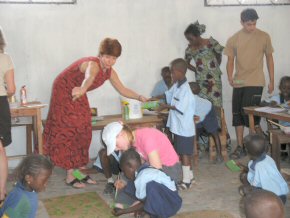 ..the background was the roll of brown paper, unrolled down the classroom floor, with lots of small children having sponges and dishes of paint in varying shades of green to press onto it.

The animals, flowers and leaves were shown to the children and Tina explained that yes, they could colour / paint them ANY colour they liked and they would then be cut out to go in their jungle. 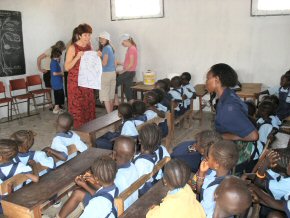 how to make flowers 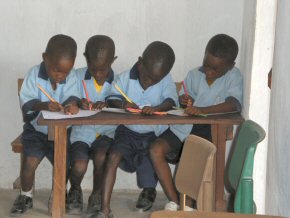 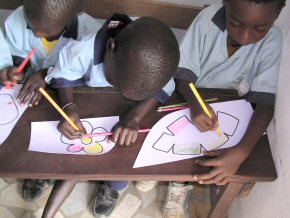 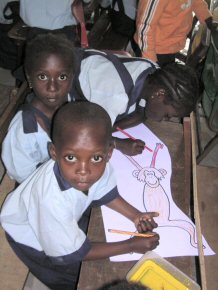 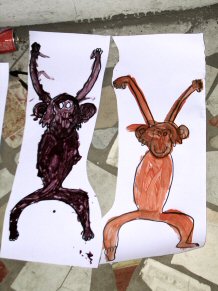 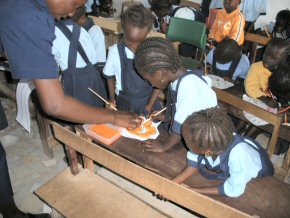 The enthusiasm was unbounded and the concentration was intense - for over an hour these small children were completely absorbed in their work, until every square inch of jungle was green and every animal, flower and leaf had been coloured and cut out. (We toubabs did the cutting out...)

Then, the great moment when it could all be put together and they could stick the animals etc onto the base. 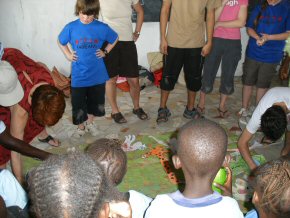 adding things to the jungle 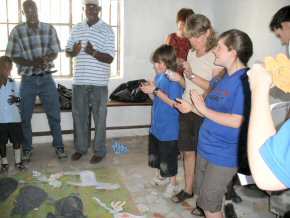 a round of applause

We all agreed it was a splendid jungle and the teachers decided it would be put up on the wall of the nursery classrooms - the children were delighted that they could keep it, they had thought that we would take it away with us as it was so beautiful!

The second Tina art session was at KMJ Nursery - we have been visiting this little school for some years now as it is the school that the children from Kemo's compound attend before starting at Lower Basic School. Two of his own sons are there at the moment. There are more pictures of KMJ in February 2006 on this news page.

Ansumana, the headteacher, was expecting us and, unlike King's Kid Academy, he knew that Tina was going to hold a special lesson... but even he was unprepared for the ocean! KMJ has much smaller classrooms than KKA, so here we had to use the central 'courtyard' to make the basic ocean (dishes of blue paint this time) while children from different classes were organised to colour the sea creatures and make seaweed.

Once again, the children took a little while to believe that they could do these wonderful things themselves - but once they did, there was no holding them. using sponges to print the ocean 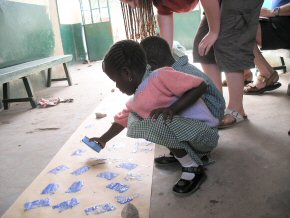 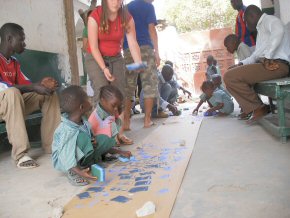 printing more of the ocean 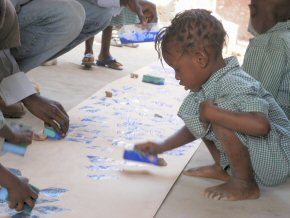 Ansumana, the headteacher, said he was five years old for the day, and he would like to paint and glue too. You can just see him getting involved above right.

a coral reef was enthusiastically painted... 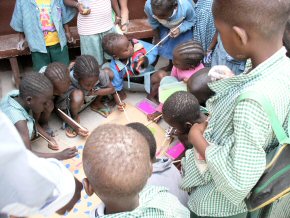 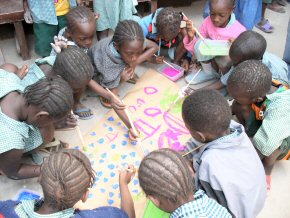 ...and the fish and other sea-creatures were coloured and stuck onto the background, after putting it up on a wall running outside two of the classrooms. above - Ansumana gets involved again, working on the ocean background. 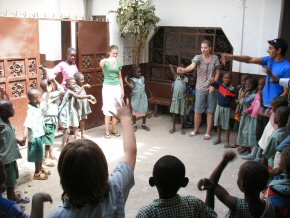 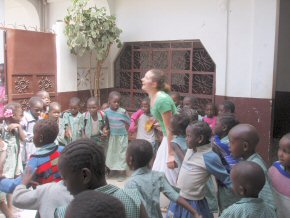 At the end of the morning Ansumana said it was the best lesson they had ever had, and the children celebrated by showing us a new dance they had just learnt from Frances and her friends while we were clearing up - the Hokey Kokey.

Enormous fun was had by all - I am not sure who enjoyed it most - and we all agreed that Tina's art had been a resounding success.