Bishop's Waltham Junior School is located in the small historic Hampshire country town of Bishop's Waltham, in the beautiful Meon Valley, about 20km from Southampton. Until September 2008, the school was known as Ridgemede Junior School, so we have used that name on this page for all events up to that date. We recommend visiting the extensive and very interesting Bishop's Waltham School website for further information about this school.

Bishop's Waltham Junior School operates a number of Extra Clubs, and one of these, called Worldclass, is run by Teaching Assistant Jeanette Mars. She started this in September 2005, and it continues to thrive year after year. Each Worldclass child has their own pen friend in Abuko Lower Basic School in The Gambia, and they exchange letters about four times a year. The club also raises funds for Abuko, mainly through an annual 'Worldclass Fayre'.

Links on this and other pages

On 30 April 2007, Ian and Pippa went to Ridgemede Junior School to run a Gambian mini market for the children and their parents. Jeannette Mars suggested that they take a selection of Gambian craft items to the school for the children to examine (and possibly buy) and this suggestion met with enthusiastic approval from the pupils.

"We arrived at the school and after a fortifying cup of coffee set up our 'stall' on four tables alongside the main entrance into the school building. It was a beautiful day, so we were fortunate enough to be able to be outside - we laid the tables out with bright Gambian cloths and had just about finished arranging all our wooden animals, bead jewellery, musical instruments, games, bed and table linen, pictures, sarongs, etc when our first visitors arrived.

Small groups of children had been drifting past while we were setting up, coming up to see what we had to offer - but the main body of customers appeared when the parents arrived to collect their children at the end of the school day - just before 3.15pm. We were almost submerged by the eager throng of both adults and children and when they had all departed, at about 4.00pm, it was as though a swarm of locusts had passed over the tables - we had sold so many animals and items of jewellery in particular that we had almost none of these items left! 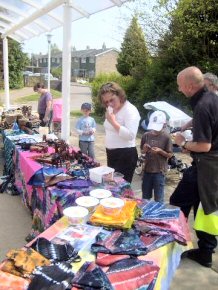 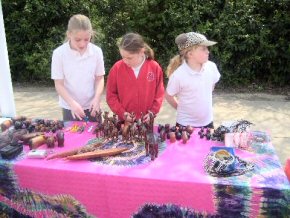 the children drift past 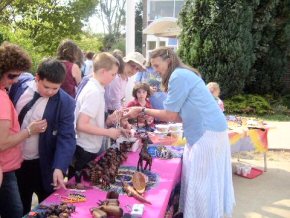 In the midst of this we also managed to run a raffle - the two prizes were pictures, one by Joan Dobie of some Gambian women at market (very fitting, we thought!) and the other by Ousman Sowe, our young Gambian artist. 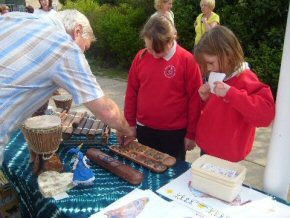 Ian explains how to play Mancala 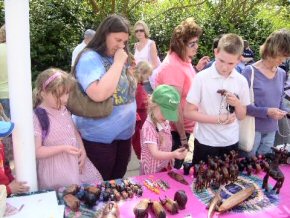 At the end of the day, we found that in just under an hour the Ridgemede school community had been generous enough to support us to the tune of £305.50 - an incredible amount, particularly in such a short time.

Our grateful thanks go to the Headteacher and staff of Ridgemede Junior School, in particular to Jeannette Mars, for welcoming us to their school and to the children and parents for their enthusiastic support - we do appreciate it."

Jeannette Mars visited Abuko LBS to meet up once more with all the children who write letters to her Worldclass children at Ridgemede and to take them a special gift of 'Mr Majeika' books. The money for the books was raised by some of the Worldclass children themselves, by running a stall at the school for Pageant - we felt that this should be used to buy gifts for their Gambian friends.

Another very special event was the sponsoring of one of the Abuko children by Jeannette and her family, complete with presentation of his named Pageant pencil case. This makes a total of six children at Abuko LBS who are being sponsored by Pageant members. 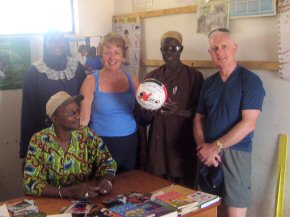 a signed football and the Mr Majeika books presented to the Headteacher, Mr Sima (seated) 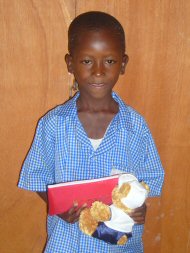 Alfusainey with a new teddy and his Pageant pencil case 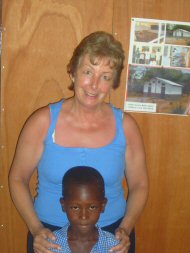 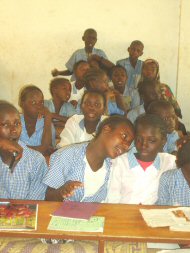 a group of children sitting at their new desks

Ridgemede Worldclass are sponsoring a set of triplets at Abuko Lower Basic School. They needed to raise £120 for the second half of their yearly sponsorship, having raised the first half earlier in the school year. They held a Worldclass Fayre on 24 and 25 April to raise this sponsorship money. The sixty children who took part exceeded their target by a long way, raising £421.65 over the two days. Jeannette reports that it was a thoroughly exhausting two days, but their results are fabulous. Pageant would like to say a huge thank-you to all who took part. 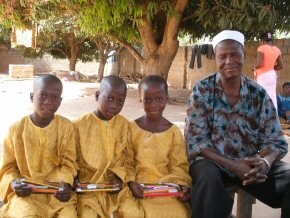 the triplets with their father 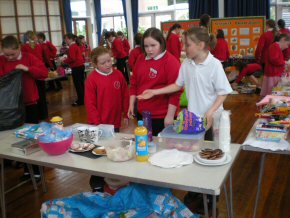 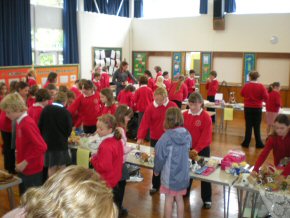 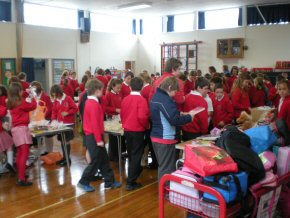 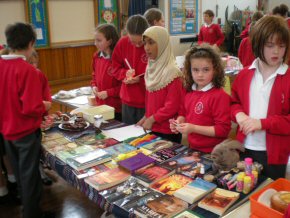 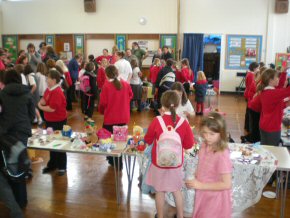 The children asked what the additional £300 they had raised should be used for. Pippa suggested that £120 should go to support the triplets for the first half of next year, and the remainder should go towards football kit and footballs. All the schools run boys and girls teams and all Gambians seem to be mad on football. JollyPhonics (a system for teaching reading and writing) has now hit The Gambia, so another suggestion was some sets of JollyPhonics wall posters. However, it's really up to the Ridgemede children, and they may have some better ideas.

Mr Daffey, the link teacher at Abuko Lower Basic School, moved to Serrekunda LBS during the summer of 2008, and he was keen to set up a link between Bishop's Waltham and Serrekunda. The Worldclass children were enthusiastic about the new link, so 50 letters were taken to Serrekunda by Pippa Howard when she visited in October 2008. She returned with 50 letters from pupils, plus one from the headmaster. This new link is in addition to the continuing link with Abuko LBS.