Members of the Pageant team attempted to post their news from The Gambia on the Pageant News Blog. However, there were considerable difficulties with internet access during the visit, so the posts listed below were made before and after the visit.

The Horsham local newspaper, the West Sussex County Times, published this article on 21 April, describing the visit of the Christ's Hospital team.

A team from Pageant are shortly leaving for their regular February visit to The Gambia. As well as Pippa and Ian, four students from Christ's Hospital (CH) will be going. We are recruiting them as members of this blog, so we hope for up-to-the-minute reports on their activities.

Arthur, Daniel, Luke and Oscar are all senior boys in Peele B at Christ's Hospital. Peele A & B (there are two houses in each 'block') have been raising money to sponsor Gambian students since 2004 - in latter years they have raised funds by holding the 'Peele Arts Festival' at school, which is an evening of music, sketches, video clips and other entertainment for which the rest of the school can buy tickets to attend. It is always entertaining, always a sell-out and organised by the boys themselves.

At the start of the current school year the Peele B housemaster suggested that it would be a good idea for some of the boys to visit The Gambia, meet the students that they have been helping and organise some supportive activities that they could do at schools and in village communities. Arthur, Daniel, Luke and Oscar have thrown themselves into the project with great enthusiasm and a rather ambitious programme has been mapped out, for which the boys have done some fund-raising to provide all the materials. The programme includes:

As we said - rather ambitious!! They are intending to write some blog entries during the trip, if they have any energy left at the end of the day!! They also want to include video clips from their trip in the next 'Peele Arts Festival', which will be in the coming summer term.

Andrew and I went over to see Pippa and Ian last night. We picked up microscopes and stuff to take with us next Friday. Can't believe we are going again but really beginning to look forward to it. The group sounds interesting, with the lads from CH coming but we will miss Joe and Katie and the others as well as Bob and Anne and Sally. Looking forward to seeing Wandifa and Abdoulie as well as Yankuba and Fatou and Ebrima, Lamin and maybe Ousman. It is really good that Helen can be with us this year and she and Ian (Groves) can help with this blog.

Its the CH guys here. Were are all so excited for tomorrow when we fly out to the Gambia. Fitting everything in the suitcase was quite a struggle, as you can see in the picture, we have shopped for lots to take over. This is not even half of it! We have been planning lessons for a while now and although we are nervous about everything running smoothly, we have had constant reassuring and are ready for anything!

Be sure to expect more posts soon when we have lots more to talk about and reflect on! We will try to post everyday, but we are told internet connection is temperamental.

Thanks, Daniel, Arthur, Luke and Oscar 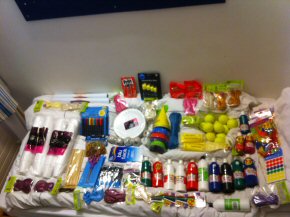 things for The Gambia trip

Back from the first microscopy workshop. This went well but a long day. 20 trainee teachers and lots of microscopes and samples of local flowers, sand etc to look at. Also Andrew, Ian and Helen ran two chemistry experiments. These were the flour bomb and chromatography of felt pen ink. Both a huge success. The CH boys were helping out as well so lots of pageant shirts. Linda came and joined in and talked to them all about teaching. Tomorrow we run another and Yankuba is coming to help. Tired now so will sign out. More news Tuesday.

Well we are back in the UK and it is very cold! 35 degrees difference from when we left.

It was very difficult to get on to the internet when we were in The Gambia so I have had to wait to let you have some more news on our trip.

We spent a week over there and actually had two rest days so they were really appreciated. The first full day we spent visiting compounds. It was lovely to see the "children" we sponsor (they are 20 and 21) and I was delighted to see the garden that Ebrima had made- lots of salad, cabbages, carrots and also two large banana trees. We visited Abdoulie's compound and met his mother. She is a very keen gardener and had a large plot very neatly kept with lots of vegetables growing well. Then we visited Wandifa's family and met Mariama and his two sons Mo Lamin and Ebe. 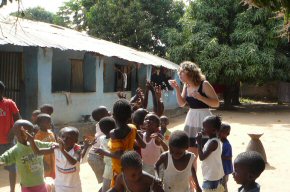 Helen blowing bubbles for the children at Wandifa's compound 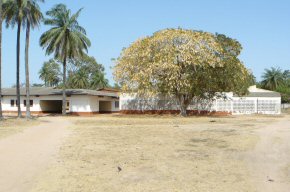 Hopefully the trainee teachers will then go out to schools and pass on some practical teaching of science with the microscopes and equipment we have left them.

The two microscopy workshops on Sunday and Monday went very well considering we had done very little to prepare for them. Andrew and Ian (Groves) did some chemistry with cornflour making a "bomb" which went down well and Helen did a chromatography session with different coloured pens. The idea that a red pen had three colours in the ink was a surprise for the student teachers. For the microscopy we looked at flowers, leaves, fabric and anything we could get hold of including a piece of termite mound and several insects. We also looked at human hair and compared it to the synthetic hair that some of the women were wearing. The student teachers (and science club) presented us all with gifts and also with a marvellous large picture of a carved stereo microscope. Hopefully Pippa can get it back as it was too large for our cases. Look out for it when you visit Pippa and Ian. 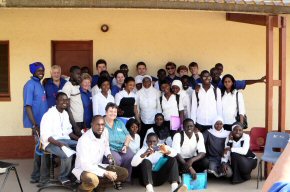 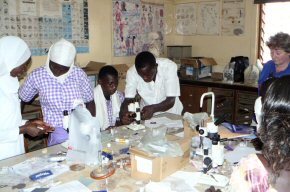 At the end of each workshop the teachers
had to teach some children what they had learned. The children came in specially for this 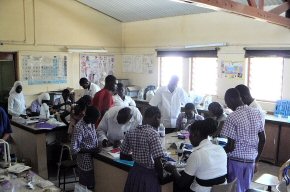 More children being shown the microscopes 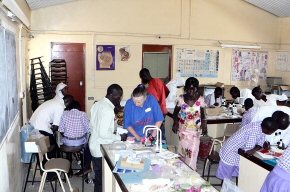 Pippa in discussion over something of interest! 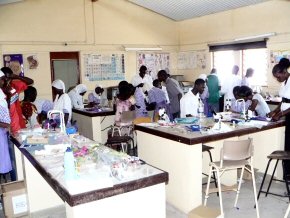 A typical view of the class 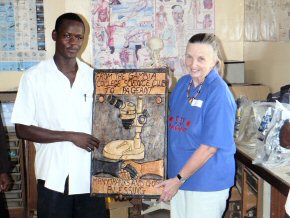 After the workshops we had a day at the hotel and then on the Wednesday we went with Pippa, Ian and Wandifa to the North Bank. For those of you who haven't done this, the trip involves catching the first ferry at 7 in the morning. It left on time and the crossing in the dark was very cold. Once the sun was up it soon became too hot though. We had a session at Barra Essau upper basic school with microscopes as we were leaving them two and some lenses for the science classes. A very impressive school and high quality teaching was evident. We then drove on to Bakalarr and left Pippa and Ian to discuss the school projects while we went with Wandifa to visit a new child we had sponsored. The family were so lovely it was a real pleasure to meet them. Finally back to the ferry picking up Pippa and Ian on the way. Got back to the hotel at 6 and had a welcome beer. Even after three washes we were very orange from the red sand. 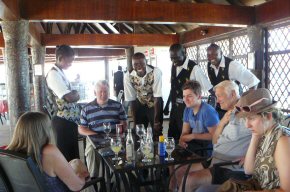 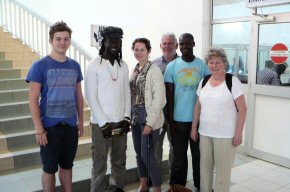 At the airport with Abdoulie and Wandifa

Finally another day off and then back on the flight home on Friday. On this final day we had a some time with Yankuba who was working at the hotel.

A lovely, if a bit hectic, week and we all really enjoyed meeting many Gambians as well as the lads from Christs Hospital who worked very hard with their sports and art sessions at the schools. Thanks to Wandifa, Abdoulie and Yankuba as well as Pippa and Ian and all those who helped out. Looking forward to going next year although sadly without Helen and Ian who will be at University all being well.

Apologies for all misspelling! Kathy (Andrew, Helen and Ian Groves)