During her visit to The Gambia in February 2011, Pippa Howard called at a very poor Gambian house to collect letters from the children to their sponsors back in the UK. She was very disturbed to find that ALL the goats belonging to the family had been stolen. This was a really terrible blow, as the goats were the only things of value that they possessed.

The thieves took three goats on one night and came back for the remaining four a few nights later. No-one saw or heard anything. Such thefts are quite rare, but nevertheless it is appalling that someone should steal from such a poor family. Even though the family didn't ask, Pippa decided to start a quick collection on her return to the UK, so that at least some of the goats could be replaced.

Pippa, Tina and Frances visited The Gambia in April 2011. [see blog of their visit] On 12 April they went to the family compound from which the goats were stolen, to measure up for a shelter to house the goats at night. They gave Baba the money for the shelter, to include a secure roof, windows for ventilation, and a door with a padlock - the new goats will be very spoilt!

The photo shows Baba and his wife, Tunku, showing the Pageant team where they will put the goat shelter - just behind their house, so that no-one can get into it without them being heard. 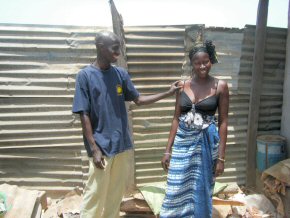 Baba and Tunku at the site for the goat shelter

A week later on 19 April was Goat Buying Day. This was a first for PAGEANT, and all were quite excited at the prospect of a new 'Gambia experience'! First they stopped at the compound to check that the shelter had been built and was secure enough to prevent the new goats from being stolen. The team found an excellent shelter, complete with ventilation, food and water, and a lockable door. 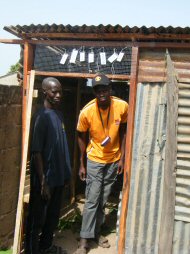 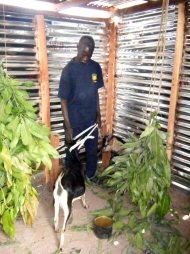 Baba and goats in the shelter 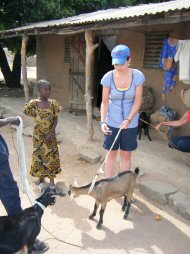 Furthermore, five of the goats had already been selected from a neighbouring farmer and were installed in their new surroundings, looking very much at home. This was very good news, as the team had been a little apprehensive about the prospect of leading several possibly reluctant goats through dusty streets, with amused onlookers to help or hinder their progress! So, we are proud to announce that Bill, Sophie, Eloise, Buzz and Eli have been installed. Eli was not too keen to wear her name badge and, as she was fairly heavily pregnant, it was decided to let her off the ordeal.

Later on Nia and Huw joined them, so all seven stolen goats had now been replaced. All the name badges are now tied above the door and Baba's children already know which name to call each goat! 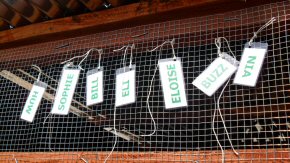 name badges on the shelter

The goats were kept in the shelter and the small enclosed space at the back of the house for about two weeks, until they knew it was their home. The older ones are then gradually allowed to wander further afield, at first under Baba's watchful eye. Once they return home each evening the younger ones (Sophie and Eloise) will be allowed to go with them.

Because the goat appeal was so successful, Pageant arranged for two more needy families to have three or four goats each, plus secure shelters if needed. This would give them real help to prosper through the rainy season ahead. Pageant has decided that when a family receives donated goats, they will be asked to donate two baby goats to another family in need as soon as they can, and thus spread the good fortune. Baba thought that this was an excellent idea and says he will be proud to donate goats in his turn. He was really amazed that people in UK would donate money for goats to help a Gambian family.

The overwhelmingly generous response to our Goats Appeal prompted us to add a goat to our Ethical Gifts page. Every ethical gifts scheme seems to have a goat, but it has been said that goats may not be suitable for such schemes. Sometimes goats are bought in areas where they are plentiful and therefore cheap, and than must be transported some distance to an area which might not be suited to them. In the Pageant scheme, the goats are all bought locally, so they are fully acclimatised. Many Gambian families keep goats. It's just that poor families can't afford to buy them. Unlike other schemes, we strongly encourage our recipients to give some of any offspring from their goats to other poor families. To find out more, please look at our Gift of a Goat on our ethical gifts page.

Pippa and Ian visited Baba's compound a couple of times in October 2011. When they were there previously in April, Eli (first photo) was pregnant. Her son was born in May, and is now growing up. He is a very good tree climber, as shown by the middle photo below. Baba has built a platform for the goats to sleep on at night. The last photo shows him standing on it. One of his daughters' jobs in the morning is to let the goats out of their shed, prop the platform up on its side, remove any droppings for use in the garden, clean out the floor beneath it, sprinkle fresh sand down and re position the platform. 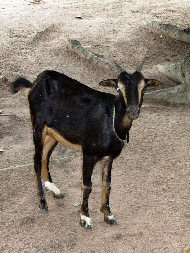 Eli's son up a tree 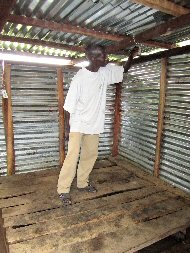 Baba on the platform

About ten days later, Pippa and Ian had a phone call from Baba, who said they MUST go to see him as he had a surprise - a new baby goat, born the previous day. Very cute - such big furry legs for such a small creature. Baba didn't know if it was a boy or a girl, and Pippa and Ian were unsure which was mum at that stage, as all the goats were out loose in the long grasses that day. 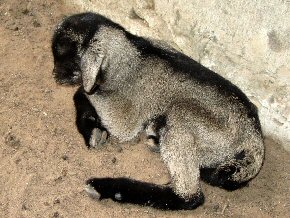 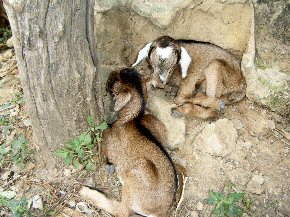 Then, a few days later, Pippa and Ian visited another family on the North Bank that had received some goats from Pageant. One of their goats had just had twins. Both these families are going to give two of their baby goats to another family in need during the first year after receiving their own donated goats.