Jo Conlon is a Sussex based artist and designer. [find out more about her work on this website] Early in 2015, she was on holiday in The Gambia, and was overwhelmed by the generosity, warmth and kind spirit of everyone she met. [find out more about Jo's Gambian trip here] On her return she decided she would try to help the Gambian people in some way. 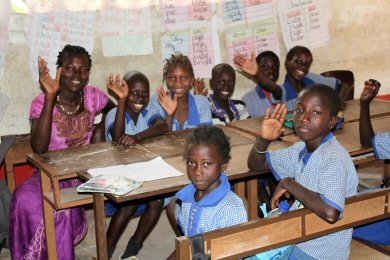 a teacher and some children at the school Jo visited

During her trip, Jo visited a local school and noticed how keen the children were to learn. As regular readers of this website will know, Pageant has a sponsorship scheme to help children from poor families to complete their education. In fact our Sponsorship Page is a good place to find out more about the Gambian education system and how much it costs Gambian children to go to school. Jo's research led her to Pageant, and she realised that we were helping Gambians in just the way she wanted to do. So she decided to raise money for us, and decided that running in the 2016 Brighton Marathon was a good way to do it.

We will be following Jo's fundraising and training, and keeping you up to date with other news on this page. When it gets to using the money Jo has raised, we will also give you full details here. So bookmark this page and keep an eye on how things develop.

Update 31 March and a Change of Plan

As part of her preparations, Jo took part in the Brighton Half Marathon on 28 February. She completed the 13.1 mile course in 2 hours 17 minutes and 52 seconds. Her efforts resulted in a boost to her fundraising, adding over £110 in donations, and her total is now £710, (£872.50 including GiftAid). 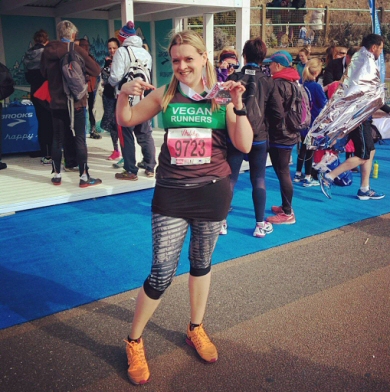 Jo after finishing the Brighton Half-Marathon

Jo's plans have now changed. Here is her latest update:
"My Brighton marathon challenge has changed slightly and I am now going to run the Lisbon marathon! So gutted, but I've bruised/cracked a rib (it was more of a crunch) so no training for me over the next few weeks. I deferred my place for the Brighton marathon until next year and have signed up for the Lisbon marathon this October. This is kind of a 'buy one get one free' deal on your donations ;)."

"In other running related news I've also joined become a member of Vegan Runners so I am officially a member of the English Athletics association which is not something that I ever thought I'd be able to say... who knew that I'd enjoy running so much?"

"I can't wait to get back into training. I want to say a big thank you to all those who are supporting me. It's just been over a year since left Gambia feeling inspired to do this challenge. I'm hoping that I'll be able to return next year with 2 Marathon medals in my pocket and the knowledge that I've been able to contribute towards a brilliant charity.
Jo xx "

The 2016 Lisbon Marathon was held on Sunday 2 October. It was a spectacular course starting in Cascais, going along the Atlantic, through the beautiful gardens of Oeiras, along the banks of the Tagus river, though the heart of old Lisbon and finishing at the Parque das Nações. [find out more about the Lisbon Marathon]. Jo completed the marathon in a time of 5 hours, 32 minutes and 6 seconds. We hope to bring you further news and photos, and will keep you up to date with her preparations for the Brighton Marathon.

Until we get some photos from Jo, you can see some proofs here unfortunately with 'watermarks' on them.

Jo has so far (5 October 2016) raised £1060, which will be split equally between Pageant and Thyroid Cancer Support Group Wales. Her fundraising will continue up to and after 2017 Brighton Marathon, so please sponsor Jo and help her to raise funds for Pageant's work in The Gambia. You can donate online using your credit or debit card, orwith PayPal, by clicking the 'Donate' button below.

Click the 'Donate' button to sponsor Jo Conlon. This takes you to a Virgin Money Giving page, where you should click on 'Donate now'. Donations will be split between Jo's chosen charities Thyroid Cancer Support Group Wales and Pageant, so you'll be helping two good causes.
How we safeguard your information