Christmas 2008 produced the largest ever amount donated for mosquito nets through the Pageant Ethical Gift Scheme We received enough money to buy 50 family sized nets, which we took to Jarreng during our April trip up-country. Jarreng is called the mosquito capital of The Gambia - an unenviable label.

Fortunately our minibus-type vehicle was equipped with a large roof rack, onto which we could tie the very large bundles of nets during our extremely bumpy journey. The first photo shows our driver, Abdoulie, getting one of the bundles down after we had arrived at Jarreng so that we could distribute them. Yankuba, our trainee agent (in blue Pageant T-shirt and cap in the same photo) comes from Jarreng, so he was in charge of the distribution of the nets. We started at a compound at one side of the village, and distributed half the nets to families with small babies and pregnant women living in that area. Photo 2 shows the delight of one woman who punches the air as she receives her family's net and photo 3 shows a group of the happy recipients with their nets. 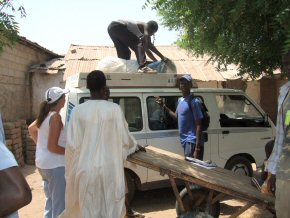 Abdoulie unloading the bundles of nets 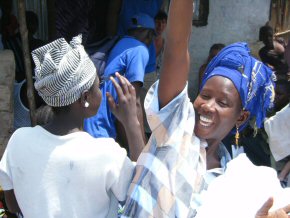 One woman's joy at receiving her net 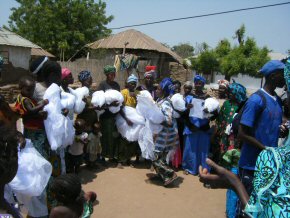 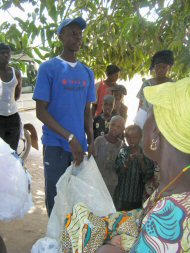 Then, at Yankuba's suggestion, we moved some distance away to his grandmother's compound at the other side of the village, where the rest of the nets were distributed. Once more, it was the pregnant women and those with small babies who received the nets, as they are the most at risk from malaria. The nets were greeted with just as much enthusiasm here - Yankuba organised the whole of the distribution with great tact and explained carefully how the decisions were being made as to who received the nets - see photo 4. It was obvious that these nets were among the most precious gifts that these families could receive - Yankuba explained how the gift token system worked and the women all burst into spontaneous applause, so we offer a very large 'Thank you' to all our generous donors on behalf of the women and families of Jarreng.