In 2005, Ben, then 10 years old and one of Pageant's youngest members, became very keen on helping to raise funds for children in The Gambia. He and the rest of his family already sponsored Kumba, a delightful 16-year old girl from Jarreng, and Ben and his two sisters raised most of her sponsorship money themselves. However, during the Pageant AGM Ben said he would like to do more and decided to give a presentation during a morning assembly at his school, Warnham CE School, near Horsham in West Sussex. (see the Warnham School website)

A Power-point presentation was duly put together and a date was arranged for a Monday during the Spring Term. In the event, Ben managed to do a lot more than we anticipated. To start with, he had to give his presentation twice on the Monday. This was because so many children (and staff) wished to see it and to dress up in some Gambian clothes that he took along with him for the occasion.

On the following Friday the serious fund-raising took place, again at school. Ben and three friends had made some cakes and sold them, they organised several games including 'Beat the goalie', 'How many sweets in a jar', 'Guess the TV programme' and so on. They sold compliments to teachers(!) and finally held a talent show to round off the day.

Ben raised £200! A tremendous effort, for which we were truly grateful. We decided, with Ben's agreement, to spend the money on two more Sollatek solar-powered lantern systems, so that another two family compounds can have good lighting during the evenings.

This meant they would be able to read, play games, do their homework and generally extend their day. As Kumba told us, many of the Gambian children just have to go to bed when it gets dark as there is nothing they can do if they cannot see properly.

Family compounds generally house large extended family groups, so these two lanterns will be helping 20 - 30 people, plus visitors who will no doubt arrive from neighbouring compounds to share the facility. 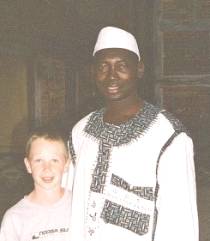 Ben with our agent Kemo
during Kemo's UK visit in 2004

When Pippa visited The Gambia in November 2005, she presented two solar lanterns, bought with the money raised by Ben, to villagers in Siffoe and Bakalarr. When this page was first published in 2005, a complete set of Glowstar lantern plus solar panel could be bought for about £100. The Glowstar is still available (Glowstar website), but many different types of cheaper and more efficient lamps using LEDs are now on the market.