Siffoe is a large village about 40 km south of Banjul, close to the border with Southern Senegal. Pageant member Mo Dawkins had first seen Siffoe Lower Basic School on a visit to a family in Siffoe, and identified it as being in need of help. The school had two reasonably sound classroom blocks and a serviceable kitchen. It was well fenced and has its own well with a hand-pump in the centre of the school compound.
[Map of school location]

Updates on this page 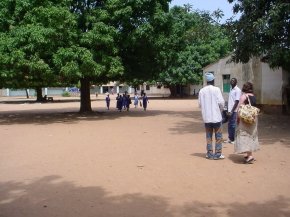 children in their blue uniforms gather around the water pump children outside the school kitchen 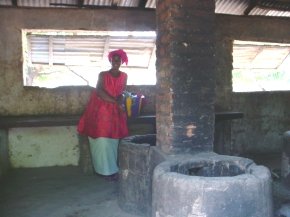 one of the cooks inside the kitchen 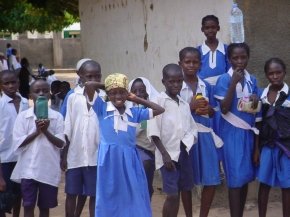 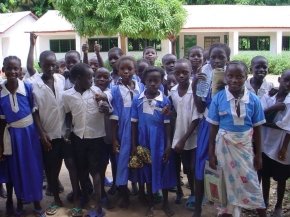 Siffoe School was very short of classrooms for the number of children it served - a further block of five classrooms was started a few years previously, but the source of the money dried up and the building was not completed. The outer shell of concrete blocks had been erected, the metal roof trusses and the doors and windows had been bought, but the roof had not been started, the floors and veranda had not been laid and the walls were un-plastered. 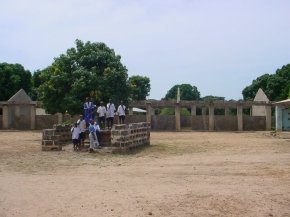 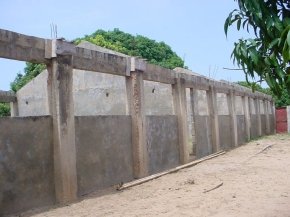 close-up of the unfinished classroom block

We asked the headmaster to get estimates for completion of the building and he did this quickly. The estimates are widely different: the lower one (~£2,560) is from the village builder, the higher one (~£5,915) is from a more 'professional-looking' outfit who will no doubt have much higher overheads and will not use the labour available from teachers and the village community.

The Pageant Trustees decided that the rest of the money from Three Peaks Challenge should be used to start this project. with Pageant providing sufficient extra funding to complete three of the five classrooms. The further two classrooms will be completed as soon as funds allow. The estimate from the village builder was accepted and the staff, pupils and villagers of Siffoe helped by contributing their labour.

In January 2005, the roof was fitted to the new classroom block. 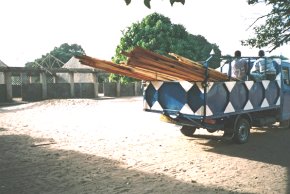 timber for the roof arrives by truck 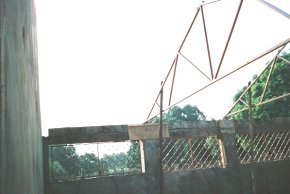 The floors have now been laid. One classroom is roofed and plastered, but not yet painted and there is no blackboard. The children don't seem to mind - They seem to enjoy the novelty of 'camping out' in their new room. 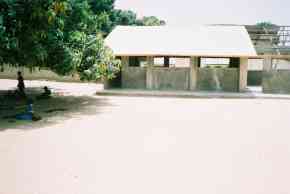 classroom block, with one room roofed 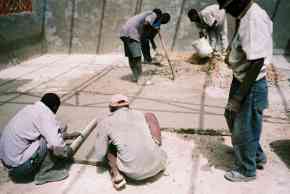 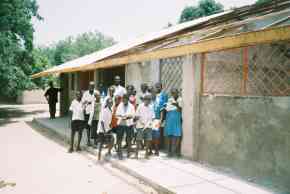 children outside the partly finished classroom 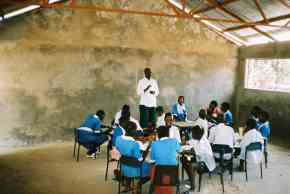 We set off for Siffoe, accompanied by Pageant members Brian and Ann, picking up Momodou, our assistant Gambian agent for Siffoe, and his new bride Isatou. This update is taken from this news page which also covers a visit to Momodou's family compound.

We were at Siffoe, to see how the large 5-classroom block was coming along. Well, it had progressed quite a bit since our last visit, but there was still a fair bit to do to finish it. All five classrooms have their roofs and windows, the floors and verandah had been completed for three of them and none of the doors have been hung, although they were all there. They were using the three most finished classrooms already, even though they did not have doors, blackboards or any paint on the walls. Pippa, the headmaster and deputy had a forceful, but still amicable, discussion along the lines of no more project money until this building was properly finished. There was sufficient money in their account for them to finish it, so they promised that it would all be ready for our February visit - where have I heard that before?! Some money for classroom furniture was left with Kemo to put in the bank, so that at least some of the rooms could be equipped when they were finished. Kemo had strict instructions that this money is NOT to be used until the buildings were ready, so we hoped that this would act as a spur... The school was in desperate need of a new kitchen, so we hoped that they will prove that they are worthy of this as we would like to consider it as a future project. 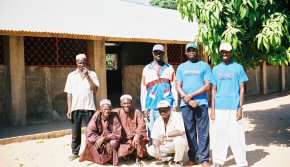 three villagers who did much of the building work, deputy & headmaster, Kemo & Momodou 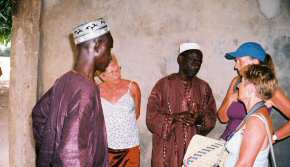 discussions with the headmaster and his deputy about the building work

We then adjourned to the shaded area outside the headmaster's office and were entertained by a number of the older children - singing, dancing and an excellent drama about the evils of men who entice young girls from their studies with promises of money and nice clothes, only to leave them in the lurch when they fall pregnant. The schools do not pull their punches in their little plays, we find - many of them address such tricky topics as unwanted pregnancy, casual sex leading to AIDS, the need to call on proper medical aid rather than the old traditional witch doctor and so on. The children here are all primary school age, but they seemed to be perfectly well aware of what they were enacting. 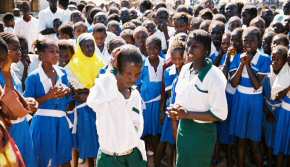 Before leaving the school we donated some gifts of seeds, footballs, writing materials. 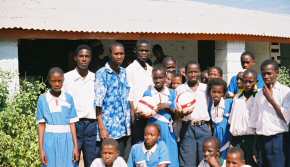 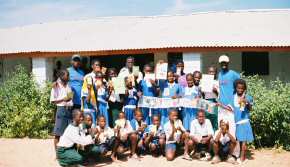 Pageant had encountered a certain amount of trouble with Siffoe LBS, with a project that seemed to eat money but never finish, so we had decided to stop funding. However, Pageant members Martin and Joan Nash met Momodou Kanteh, Pageant's assistant agent for Siffoe, during a visit to The Gambia. They decided they would like to help Siffoe LBS complete the 5 classroom block. Despite the past problems regarding the use of funds donated by Pageant and others, we agreed that they should proceed, but with caution. The project was split into 3 phases:

At the time of this update, Phases 1 & 2 were complete and Phase 3 is was probably finished. (waiting for confirmation from Momodou.) 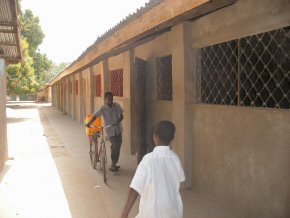 Phase 1 - front of the building 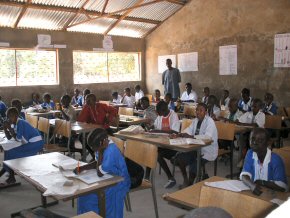 Phase 1 - inside a classroom

The photos above were taken at the completion of Phase 1 in February 2008. Pippa and Ian were very pleased with the work. Momodou and Wandifa had been hard taskmasters. Wandifa told Pippa that he went down to inspect the work when it was said to be finished and both he and Momodou went round and chalked crosses on all the places that had to be done again - and they were!! 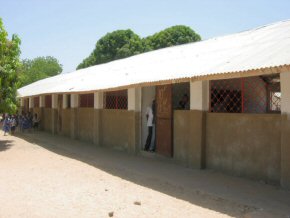 Phase 2 - front of building after painting The above photos show the same views after painting. Wandifa and Momodou say it looks very good and has been done well. Momodou insisted on three coats of paint!! Momodou's sent us these emails:

"I have taken the things (from the container) to Siffoe school, and the other things I took them home and share it with many other people in the village, they are sending a big thank to you and the project for your assistance, we really appreciate it. How is Tina, say hi to her for me, I miss you all, I will call Wandifa about the 3rd phase at Siffoe school, all the other job is already done, now is only the blackboard."

"I drove Wandifa to Siffoe school to look at the phase 2 and he is happy about it and he gave me the money for phase 3 which will be blackboards. At the moment I am looking forward to that, next week I want to go there and finish the blackboards, because some of them need to be changed and some just to be painted again and look nice."

Martin's verdict: "Delighted with the photographs, there really is a vast improvement, just needs a few pictures and children's work on the walls and we have some real classrooms. Momodou and the workforce should be very proud of what they have achieved in a relatively short space of time."

So that is a really wonderful result on a project we thought would never be completed.