Sika Village Market was started using microfinance from Pageant's Loan Scheme. In 2005 there were discussions between Pippa and Bakalarr headmaster, Bakary Gitteh and his wife Mariama. Pageant's scheme was based on a micro-loan scheme started by two lady missionaries in South Africa. The scheme involved lending a small sum of money, 1500 Dalasis, to each of six ladies so that they could each start a small business. Each lady got a loan, interest free, for a period of six months, paying back 250 Dalasis each month. When all the money was repaid, it would be lent again to six more ladies.

Start of the Sika Loan Scheme

Sika [Map showing Sika] is a village on the North Bank, about 20km by road from Bakalarr. When Pippa visited in November 2005, she was surprised to find so many ladies present. Bakary had been busy! Apparently he had told Mariama about the loan scheme, she had discussed it with the village ladies and they had talked of nothing else since! So, they were all here to start the ball rolling...

Bakary told Pippa all this during lunch - he also asked Pippa to address the assembled gathering so that they understood that the authority lay with Mariama as the local spokeswoman for Pageant. What a surprise - and Pippa thought she was there for a quiet day. Pippa takes up the story...

"So, we gathered in the sandy square in the centre of the Gitteh family compound and 'Pageant Loan' was launched. First, we were welcomed to the village by Bakary's father and also by the leader of the village women's committee. Next, Bakary spoke about how Pageant had come to help his school, how he had visited us in UK and had heard about the loan scheme. Then it was my turn - I had suggested to Mariama that we should do a sort of double act, with her translating what I said directly to the ladies, one sentence at a time. This, I felt, would ensure that all the villagers would understand that Mariama spoke for us and was authorised by us to act on our behalf in our absence. She did it beautifully and had all the village women hanging on her (and my) every word. The words that brought the biggest cheers were 'interest free' and 'business opportunities for women'. 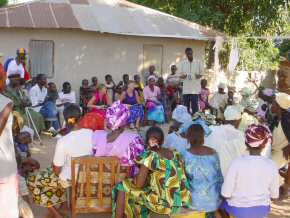 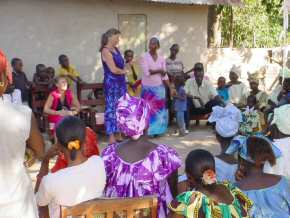 The six women who had been chosen by the village to be the first recipients of the loan money now came forward and were introduced by the leader of the village women's committee. Each in turn explained her idea for a small business, and in each case we asked the rest of the villagers if they would support the proposed venture - which of course they did! The ideas ranged from selling dried fish and cooking oils (buying in large quantities, selling in small ones) to what they referred to as 'making and selling Omo' - this must be some sort of laundry product that can be made locally.

Each lady was then called forward individually and asked to say in front of the whole community that she understood that the loan of 1500 Dalasis was for business purposes, that 250 dalasis of the money must be paid back at monthly intervals until the whole sum had been repaid after six months and that the ability of the money to be re-circulated to other village women depended on complete repayment by everyone in the group. We also explained that if one member of the group was finding things difficult it was important to support and help her to fulfill her part of the bargain and NOT to heap blame on her - this is now community money and must be worked for with community spirit!

Mariama has a book in which she will keep all the records of transactions and she and each of the six ladies will sign every time money is lent or repaid, so that there will be no arguments as to who has paid what!

We would like to go back in February to see how they are getting on - I do so hope they succeed. Even these small business ventures could make a big difference to the lives of these hard working women - if one has very little, then a little more has quite a large impact..." 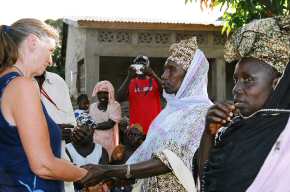 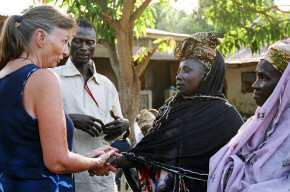 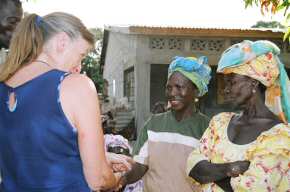 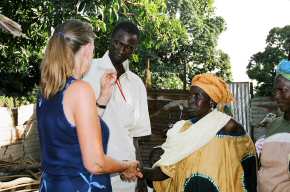 We hope that first Pageant Loan scheme at Sika is a great success, and we will report its progress on this page. We hope it is the first of many such schemes, and that, with Pageant's help, the idea spreads to other communities in The Gambia.

When Pippa visited Sika in November 2005, the Pageant loan scheme was started with six local village women, Mariama Gitteh being the link between them and Pageant to manage the repayment of the loan at monthly intervals. Here is Pippa's report:

>"We said at that time that we would like to go back in February to see what progress they were making and to find out if all the women had succeeded in making the first two repayments of their loans. Mariama had promised to make up a book to keep all the records of transactions to ensure that there would be no arguments as to who had paid what - would it have all worked out, we wondered, or would one or some of the women have found it impossible to make their repayments?

On the last Sunday of our February 2006 visit we set off once more for Sika - in some trepidation, I must confess, as to how we would find things were proceeding. We need not have worried - Mariama met us with smiles, told us that the women had decided to come to dance for us as a thank-you for having helped them and showed us her book where all the transactions had been entered. She insisted on us checking the book and counting all the money that had been given to her by the women - and all six women had paid their first two scheduled repayments in full - fantastic. One of the women had found it difficult to make one payment, but had been helped and chivvied by the others to do so. The village community had supported the six women and others were eager to be the next ones to take up the loans in June, by which time these first loans are scheduled to be fully repaid. 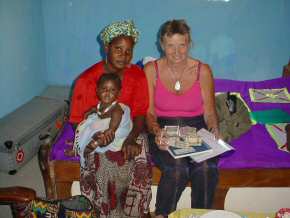 Our 'Champion' Mariama (Bakary Gitteh's wife), baby daughter Nyima and me after counting the first two sets of pay-backs - all were correct 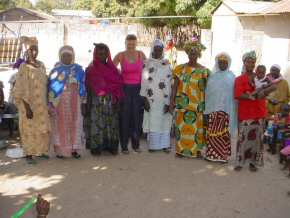 Our first six ladies, plus Mariama, Nyima & me 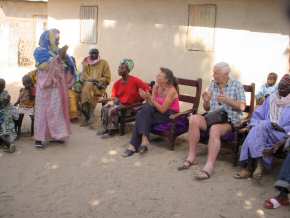 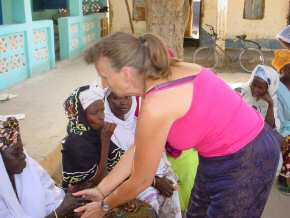 Congratulating each of the women in turn 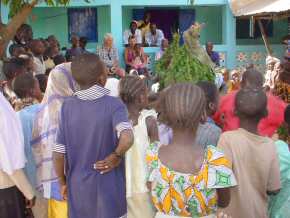 Celebration dance - the women, a couple of 'trees' (and me from time to time!) 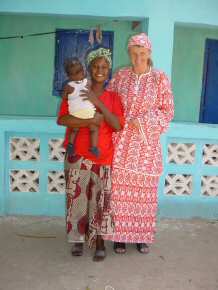 my gift from Mariama

After breakfast, dancing, lunch and presentation of some gifts to the village community, the women assembled once more in the Gitteh compound. The six women who had become the first recipients of the loan money again came forward and were re-introduced by the leader of the village women's committee. They had brought with them samples of the products they were selling - in each case they had been able to use the loan to buy cheaply in bulk and then to repackage their goods to sell in small quantities at prices that were acceptable to the village community. We asked if the next six women had been chosen - they explained that they did not want to actually choose the second group until the first group had made their final payments - how wise of them, we thought. However, there was a general feeling of anticipation that many of the village women would eventually benefit... we do hope so.

Before we left Sika, Mariama told us that she was keen to see if she could get the loan scheme working in another village. She thought that discussions with the Bakalarr PTA chairman might well enable the women of Bakalarr village to be introduced to the idea and that they would probably be as enthusiastic about it as the women of Sika. As we said in November, we hope that, with Pageant's help, the idea spreads to other communities in The Gambia - maybe Bakalarr will be the next one."

During Pippa's trip in February 2007, Mariama Gitteh updated her on the progress of the Pageant loan schemes in both Sika and Bakalarr. The Sika scheme was going extremely well - the third batch of women was just about to complete their loan, with all of them making full repayments on time. Six more ladies were eagerly waiting for their turn, and ALL the women of the first and second groups are still trading - a real success story.

Sika market now has a brand new market place, completed recently with the help of funding from Pageant. The Sika Women's Village Market is a remarkable testament to the Pageant Loan scheme. Since it was started in November 2005. it has brought hitherto unknown trade to this tiny, off-the-beaten-track village on the North Bank.

Pippa officially opened the market in February 2009, complete with a marching band and much festivity.

The market is now in use every morning and all the local women have the opportunity to trade each day. They say it has transformed their lives. 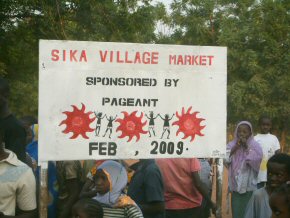 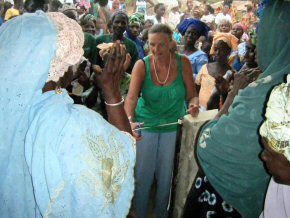 Pippa cuts the tape at the official opening 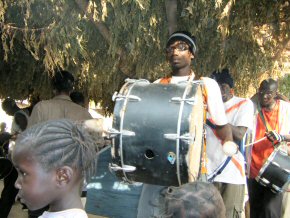 Marching band at the official opening

The Sika Village Market and the small businesses which trade through it are all thriving. As with all Pageant Loans, once a scheme is up and running, it becomes a totally local enterprise. We understand that the Sika scheme has gone through about ten or eleven iterations. This photo shows Pippa with some of the Sika ladies who have flourishing small businesses as a result of the Sika Loan Scheme. 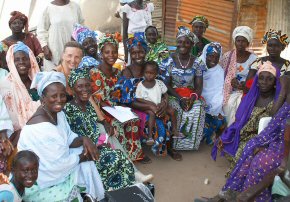 Pippa with some of the Sika ladies

Please Help With a Donation

To start a scheme, inflation has meant that we now need 1,800 dalasis for each of six women, so a group of six women needs a starting investment of 10,800 dalasis, or about £180 at the exchange rate of July 2019. (You can check exchange rates here.) We have several new schemes in the pipeline which you can help to finance. You can donate any amount to our Loan Scheme online, using your credit or debit card.

Click this 'Donate' button to make a donation to Pageant's Loan Scheme. This takes you to a Virgin Money Giving page, where you should click on 'Give now'. Donations will be kept separate and used only for our Loan Scheme.

You can donate online using your credit card, debit card or PayPal. This service is provided by Virgin Money Giving. They add a small handling charge, and also charge card processing fees. However, you have the option of paying these fees so that Pageant gets all of your donation. If you are a UK taxpayer, they also collect Gift Aid for us, meaning that an extra is added to your donation without costing you an extra penny. [more about Gift Aid]  [How we safeguard your information]

Alternatively you can send a cheque by post to Pippa Howard. Old School, Worthing Road, Southwater, Horsham, West Sussex. RH13 9DT, UK. Please write 'Pageant Loan' on the back of the cheque. Also if you are a UK taxpayer, please send us a Gift Aid form to allow us to reclaim UK Tax. Gift Aid allows Pageant to claim an extra from the taxman. Our Gift Aid form is available in Microsoft Word or PDF format.