Unity Nursery School and Daycare Centre is in Banjul City just off the main Imam Omar Sowe Avenue. It started with has around 50-60 children in three nursery classes, plus about 10 in the daycare centre. It has recently expanded into new classrooms across the road, which effectively doubles its size. Like all Gambian nursery schools, Unity is not part of the state school system, and all children have to pay modest school fees.

In February 2014, Pippa and Ian made Pageant's first visit to the tiny Unity Nursery and Daycare Centre in Banjul City. They went to check on the suitability of the school for a recently-sponsored child, Mohammed, who suffers from what appears to be cerebral palsy and so has difficulties with his mobility and speech. The visit was a great success - the nursery was very well run, the staff were motivated and enthusiastic and were including Mohammed in many activities. All the children at the school were happy and enjoyed showing the visitors what they had learnt, both in their classrooms and by singing a wide variety of songs. It was decided at that time that Pageant would support the school in various ways and would visit again in April. The photos below were taken in February. 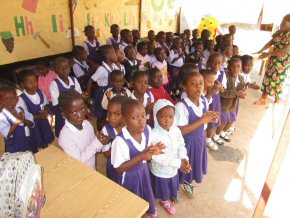 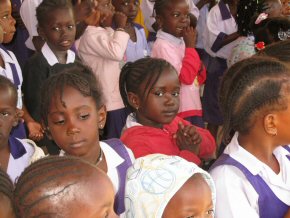 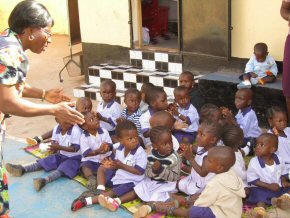 In April 2014, a Pageant team, consisting of Tina, Frankie, Rachel, Ellie and Caroline, visited Unity Nursery for some singing and dancing, followed by painting and making collages. They were joined by a lovely family from England who they met in the hotel and whose extra hands were invaluable on such a busy day. They were greeted by the nursery children singing and dancing in their multicoloured shorts! This was followed by a really successful art morning where everyone got covered in paint, glue, glitter and sand! The children sponge painted, finger painted, collaged and coloured lots of insects from a story and we were able to create a colourful classroom display to help the children with their numbers. 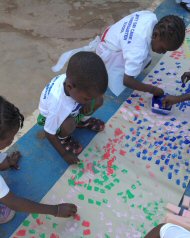 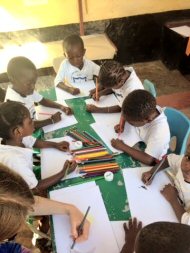 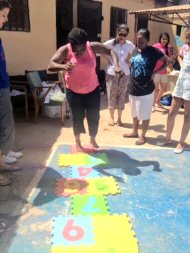 Tina then told a sensory story which included bubbles, a thunder tube, foil lightening and water spray. The children listened really well and, due to their excellent command of English, the story didn't need to be translated! It was lovely to see Mohammed, who has special educational needs, taking a full part in the activities. His favourite things were the bubbles!! Our experiences that morning made us even more certain that we wished to support the school. Frances and her friends decided to donate a large proportion of the remaining funds from their Richmond Riverside run to the school and we also sent some football kit out for the children when we packed up our container in the summer of 2014 - very popular. 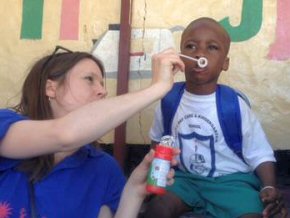 October 2014 - Floor Tiling and Other Improvements

When Pippa and Ian visited again in October 2014 they went to Unity early in their trip and discussed with the head-teacher and colleagues how the donation from Frances and friends should be spent. The decision was reached that the most important things were tiling many of the floors and installing a ceiling plus fans in the two larger classrooms.

During this visit we saw that Mohammed had improved enormously in both mobility and speech and was able to march (albeit more slowly) with the other children and was also starting to write both letters and numbers in his exercise book. 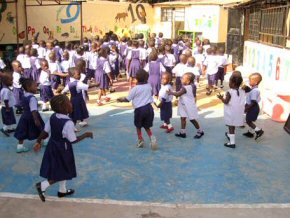 Mohammed (in red socks)
marching with the other children

Towards the end of the trip we were asked to visit the school again, to see what had been done with our donation. The floors in the main classroom, both toilets and the head-teacher's office had been tiled to a very high standard and surplus and broken tiles had been used in the area outside the toilets, which is used for babies' potties, and around both outside taps. A new ceiling with electric fans had been installed in the classrooms, using properly armoured cable and shielded switch-boxes (this is not always the case in Gambian electrical installations!). We and the staff were thrilled with the improvements. 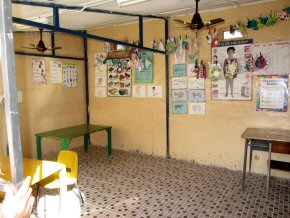 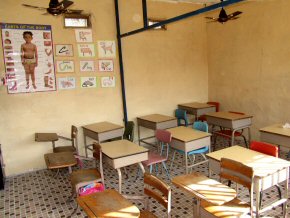 another view of the new floor tiling 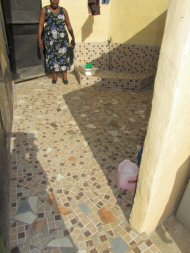 headteacher (seated on the right) >>
in her newly tiled office >> new tiled floors in one of the two toilets 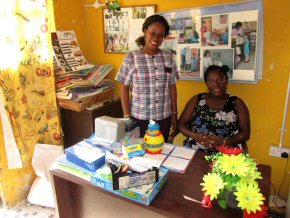 headteacher (seated on the right)
in her newly tiled office

Before our trip Tina had suggested that a gift of some didicars would enable Mohammed to be involved in play on more equal terms with the other children. We bought three of these little cars (and wish to take this opportunity of thanking didicar for their generosity in discounting the price). We managed to take two of them out with us on the plane and took them to the school on the second day of our visit - to say they were enthusiastically received is an understatement!

When we arrived the children were all singing their 'good morning' songs, so we greeted them and made our way across the compound. We had assembled one car at the hotel and had the other one still in its box to show our Gambian agents and the school staff how to do it themselves - the third car will be sent with our summer shipment. Before we had even unpacked the second car Mohammed had made his way across the compound and was holding my hand while climbing onto the first car - I need not have worried that he would be unable to do this himself!! All the children were fascinated by the cars and many were soon taking turns to try them out. 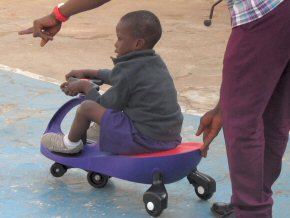 Mohammed gets to grips with the didicar 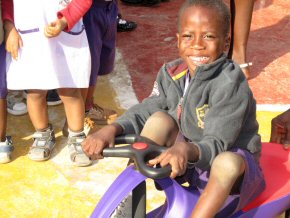 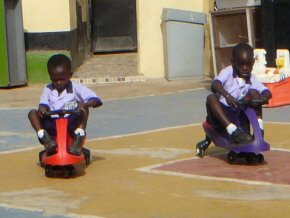 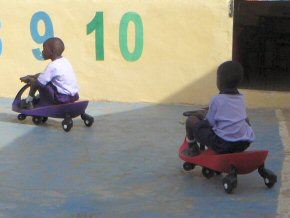 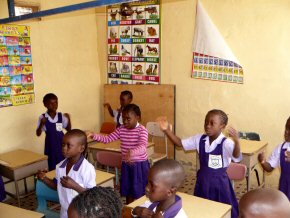 Meanwhile, Chris was teaching another group of children an action song - they grasped words, tune and actions really quickly... and when we returned two weeks later to see how they were doing with the didicars they sang the song again perfectly for us!

The didicars were obviously a big success - we will try to make sure we can fund one more to send out in the summer, so they can have four altogether.

A Pageant team, which included members Ann and Brian, have just visited Unity Nursery. The children there were involved in a celebration parade organised by Banjul city council. Yankuba sent these photos - Don't they look cute?

Mohammed (our little sponsored boy with what appears to be cerebral palsy) is the boy in the middle of this first photo. 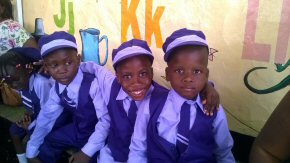 Unity Nursery children dressed up for the celebration parade 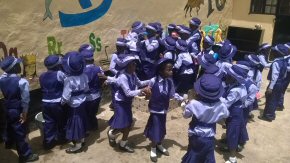 Pageant visited Unity Nursery during their November 2016 trip to The Gambia. As ever the children were an absolute delight and the staff very enthusiastic, dedicated and hard-working. The school is clearly successful as it has expanded into newly-acquired premises on the other side of the road, but still keeping the original site. Each site will have three nursery classes and with their own toilet facilities. At the time of the visit, the new site had only two classrooms which had been well converted. A third classroom still needed work done to make it usable. children outside a new classroom It's great to see male teachers working with very young children - a rarity in the UK. Such wonderful enthusiasm.

Pageant decided that the refurbishment work would be a suitable project to benefit from the money raised by Centre Academy East Anglia (CAEA). (see Pageant's CAEA page) We agreed estimates for the work to be done, planning to return in February 2017 to look at what had been achieved.

Andrew, Kathy, Wandifa and Pippa visited Unity Nursery again to see the work carried out to convert and make good two new classrooms. They had done a fine job in tiling, installing a suspended ceiling and electrics including ceiling fans. This really is a first class school and we were able to agree to make a further payment to allow the next project to proceed - work on the outside walls and tiling. 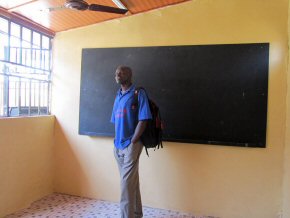 This work had been funded by a donation of £1,340.93 raised by pupils at Centre Academy East Anglia. In May 2017, Pageant visited CAEA to show them what their fundraising had achieved, and present them with a wooden mask as a gesture of thanks from Unity Nursery.