The capital city Banjul lies on an island at the mouth of the Gambia River, and is connected to the larger urban area of Serrekunda by a causeway. Within and around Serrekunda are communities such as Bakau, Fajara, Kololi, Kanifing, Bakoteh, Latrikunda, Tallinding, Old & New Jeshwang, Wellingara and Abuko which merge into a single urban area. We also include Busumbala, Brikama and Janbamjali south of the International Airport, Note that many of these places have alternative spellings, and sometimes alternative names. A large number of Pageant's sponsored children live around here, and all of these communities are within easy reach of the main tourist hotels on the coast. This page covers projects in these areas, starting with our current projects. We also list past projects where Pageant's involvement with the school has now ceased. Projects north of the river, within reach of the ferry to Barra, are covered by our North Bank and Bakalarr page, and another page, Up-country and the South, covers all other areas. You can find more about all the schools and educational institutes which Pageant is associated with in The Gambia on our Interactive Gambian Schools Page.

Abuko (aka Aboko) is a small village about 25 km south of Banjul, on the way to the International Airport. It is close to the famous Abuko Nature Reserve.

Abuko Lower Basic School was started as a local initiative, so that the village children did not have to travel 5km to the next nearest school. Pageant members Vic and Jackie Edwards took on the organisation of Pageant's help for this school. The school was twinned with Bishops Waltham Junior School in Hampshire, which still raises money to help  a  set of triplets who used to attend the school . (see our Bishops Waltham page) 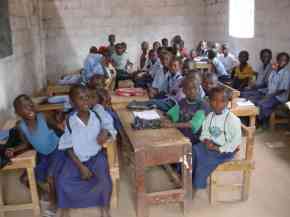 Banyaka is a village roughly half way between the densely populated Busumbala/Yundum area and the Atlantic coast. Banyaka Lower Basic School was established in 1996 and serves a wide area around it. It has close links with Chestnut Grove School in South London, and also with  Bishop's Waltham Junior School in Hampshire.

Pageant has provided help with new flooring and windows in the library, new toilets and a food vending area. 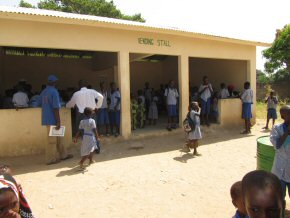 Brikamedina is a village on the southern edge of the town of Brikama, which is itself some 15 miles south of Banjul. This nursery school was set up and built as a local initiative, on land donated by the village mosque. Pageant has funding the completion of building work, rendering the walls, laying concrete floors, constructing a veranda and fitting doors and and windows, and provided classroom furniture and uniforms for the children. [more about Brikamedina Pipeline Nursery] 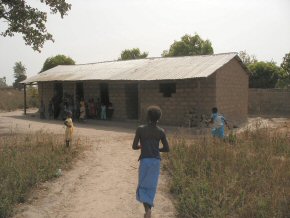 Campama Lower Basic School in Banjul was in urgent need of essential maintenance and renovation. Pageant had already got its toilets fixed, and then funded locally produced desk units like the one shown for the children. To equip all four classrooms would cost about £3,000. So far Pageant has equipped two Grade 1 classes with the new desk units, using funds raised by Brian Howard Mayoral Fund 2006-7, the supporters of Bandit who took part in the 2007 Azores and Back Ocean Yacht Race, and Steve Pitman's 2007 half marathon. The Grade 2 classes were provided with desks and chairs shipped from UK, donated by Manor Green Primary School in Crawley. This is all reported on our Campama page. 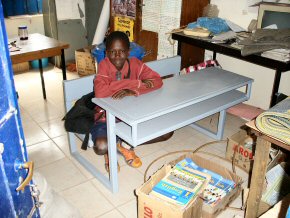 Humanity Nursery School is located in Farato Nema. It was started as part of a community project by Fabakary Saidykhan, who built the school in his own compound.

Pageant first visited the school in April 2011. Since then we have provided support and funding, and have visited on a regular basis, both to check on Pageant's projects and to provide fun and games for the children.

Our Humanity Nursery School page describes these visits and how Pageant has helped the school. 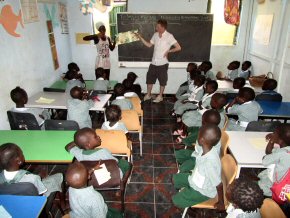 The King's Kid Academy (KKA) was founded in 1997 by a Nigerian missionary to provide nursery education, expanded to Lower Basic Grades 1 to 6, and by 2014 covered Grades 7 and 8 in the Upper Basic range. Pageant started helping KKA in 2006, and two Pageant web pages cover happenings at this school. The first KKA page covers 2006-2007, and the second KKA page from 2008 onwards. Funds were raised by teams in Plymouth-Banjul Challenge - Desert Mice & First to the Bar in 2007 and Transplant Titans in 2008. Students from Oakham School (UK) and Copenhagen International School funded a new toilet block in July 2008, as part of the Toilets and Textbooks project. 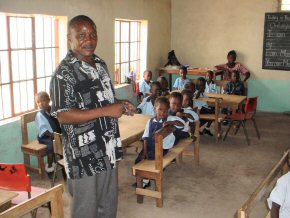 In June 2011 Lauren & Dan spent some time teaching at KKA as part of their Education Degree Course. Pageant visits KKA regularly, such as April 2012, April 2013 and April 2014. There is a link between KKA and Trafalgar Community Infant School in Horsham.

Unity Nursery School and Daycare Centre is in Banjul City. Pageant's involvement started when one of our sponsored children, who has speech and mobility problems, became a pupil there. Pageant helped the school by funding new flooring in classrooms and toilets, and supplied the school with two 'didicars' which are especially useful for children with mobility problems.

The school has been remarkably successful, and has doubled its size by expanding into new classrooms across the road from the original site. Pageant has continued to visit on a regular basis to see the improvements being made. [see our Unity Nursery page] 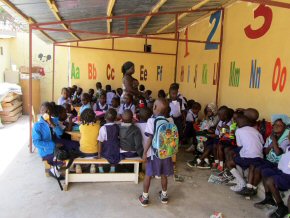 Wesley School in Banjul, was first visited early in October 2004. Their main problem was an inadequate kitchen. Pageant member Andrew Rattray decided to fund the renovation of the kitchen, because his mum, dad and uncle all went to Wesley Methodist Chapel in Launceston, Cornwall. Subsequently the school has moved to new premises. 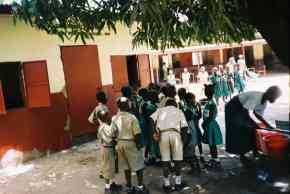 Past Projects - These are schools where Pageant has provided a lot of help, but where we no longer have any active involvement. 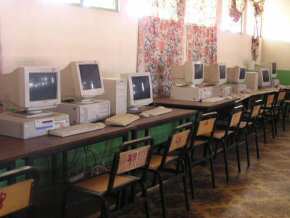 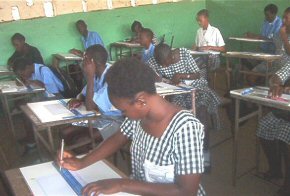 The Hilary Emery Nursery School is in Talinding, and was previously called the JJT Nursery School. Aris Harrison-Price made helping JTT her personal project. In 2005, JTT had over 130 pupils, with just one teacher and a single dilapidated classroom. Aris organised redecoration and building of toilets, provided educational equipment and funded a new teaching assistant.

In 2010, the The African Oyster Trust built a new school with three classrooms on a new site. The school was renamed in memory of Hilary Emery, as funding for the building work came from her family and friends. 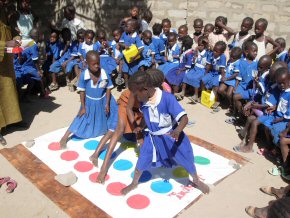 Mahmoud Achten Nursery School is located in Fagikunda a suburb of Serrekunda. John Emery and Jane Bull helped this school and achieved some great improvements. Unfortunately they were no longer able to help, and Pageant took over directly to help for a while, but currently we are not involved with this school.

A lot still needed to be done, such as building a new roof, repairing the walls, replacing the school fence, providing teaching aids and providing funds for poor children whose parents cannot afford to the modest school fees. 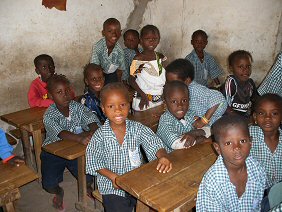 Nemakunku (aka Sareh Mowndeh, Mauwhunda Kunda) is a village about 20km South of Banjul, and about 8km from the International Airport. Pageant provided support for Saloum Nursery School.

Shap Ahoy, one of the teams in the 2006 Plymouth-Banjul Challenge, raised over £4500 for Saloum Nursery.

Vic & Jackie Edwards were very active with this school, and oversaw many improvements, including new and renovated classrooms, new furniture, a new kitchen and new toilets. 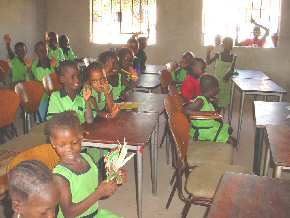 Sinchu Baliya (aka: Sinchu Dula Balia) is close to Serrekunda. There is a huge primary school, of around 3250 pupils, which received four microscopes in 2003 and has run several microscopy competitions. There is a well established Science Club and a Resource Centre built with funding from Pageant members Linda Murgatroyd and Chris Hyde.

In February 2005, there was a presentation of prizes for another microscopy competition [prize presentation]. In January 20007 Team Ibrakeforcake in the 2007 Plymouth Banjul Challenge made Sinchu Baliya their own special project, raising £1200 for the school. Read all about Sinchu Baliya LBS and its Resource Centre 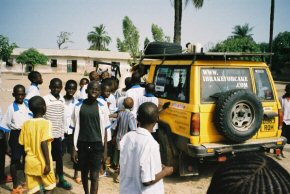 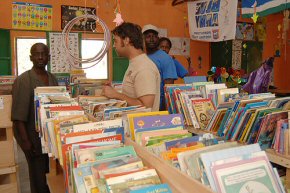 the library at the Resource Centre

Yakanu International Nursery in Serrekunda was in rented premises, with the lease soon due to run out, when Alex Odell started a project to relocate the school in new premises. She was supported by an enthusiastic group who called themselves the Gambia Crew. They raised funding and purchased land for building the new school.

Pageant helped Alex and the Gambia Crew with their project, and has described their efforts on our Yakanu International Nursery page. 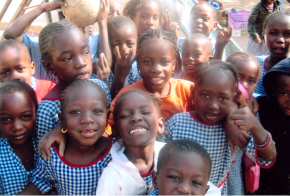