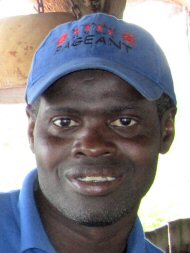 Wandifa originally lived in a large family compound in Serrekunda. The photographs below show members of his extended family, taken during a visit in February 2004. 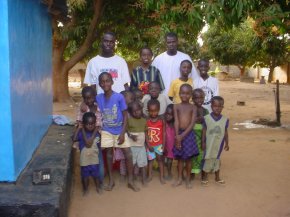 Wandifa (back right) and members of his extended family 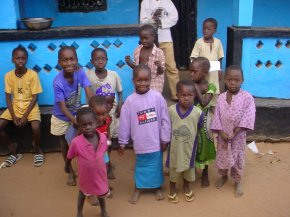 Some of the children in Wandifa's family group

The compound, or family home, in the photos belongs to Wandifa's family. He and his extended family - sisters, brothers, lots of children - all lived here together in a big group. The living accommodation was very crowded and Wandifa had recently got married, so the family decided to extend their house. However, they had very little money, like most Gambians, and they could not afford to buy cement or sand to build their house - so, what could they do?

Like many Gambian villagers, they dug a big hole in their garden, and as they dug they mixed a little water in with the soil to make a thick, sticky mud of what the masons know is just the right texture. The mud was made into blocks with a special mould - they only had one mould, so they could only make one block at a time - and the blocks were then left to bake in the hot sun. When the blocks had baked hard - it takes about two days to bake a batch - they were used like large bricks to build the walls of the new part of the house, with a much runnier mud mixture being used to stick them together.

You can see the hole that has been dug in the garden, the lines of blocks and the men building the walls in the photos below - 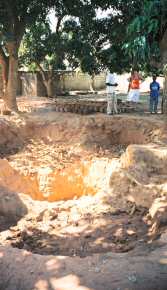 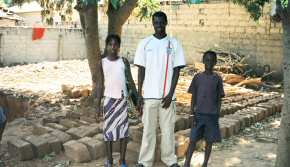 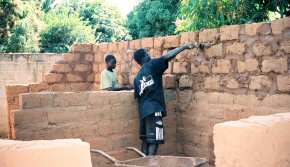 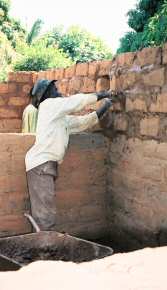 - and the new part of the house is shown in the last photo. When the blocks had been built into walls and the roof had been put on, the outside surface of the walls had a thin sand cement 'skin' plastered onto it to protect it from the rain. The inside was also plastered in a similar way and then - hey presto - they had a new house built out of the mud from their garden!! Then the hole was filled up with rubbish and covered with soil so that they will have their garden back again. As long as they could get the outside protected by the time the rains started, everything should be fine. These mud-brick houses can last quite a long time - maybe 50 years or so - and most of the village houses are built like this. 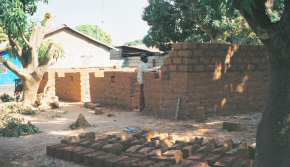 general view of the extension

More photos and a video clip about block making

Pippa reports: "We visited Wandifa's compound and met his delightful wife, Mariama Fofana, her little sister, Sandy - and of course the new baby, Muhammed Lamin. A VERY new baby - only 5 days old when we saw him... Mariama was very pleased with the gifts we took her as 'housewarming' presents and we were thrilled to meet her and Muhammed Lamin - Pippa was allowed to hold him and he didn't cry at all! Mariama has brought Sandy from her home compound to be with her in her new home - we have found that this is quite a common practice when the bride moves to a new home some distance from her own village. Wandifa is quite obviously delighted with his family - and so he should be. We wish them all the very best for the future." 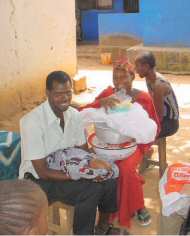 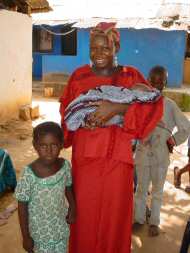 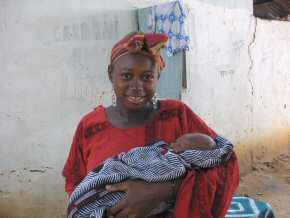 Wandifa's wife, Mariama, gave birth to their second son in the early hours of Sunday 21st February 2010. We were lucky enough to be able to visit the family the following day and found both Mariama and baby doing well. It is the Gambian custom for newly born babies to remain inside the house for their first week, but we still managed to have some cuddling time and to take a few photos of the family with the new arrival. Wandifa and Mariama already have one little boy aged 3, Mo Lamin, who is a real character and already understands a lot of English. 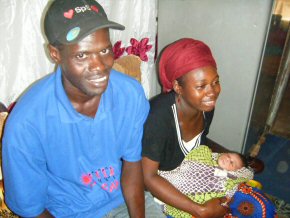 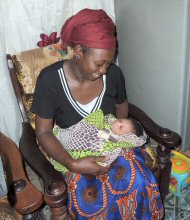 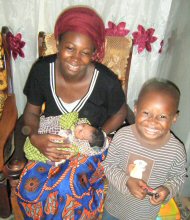 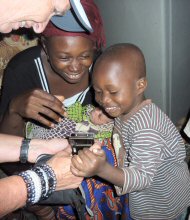 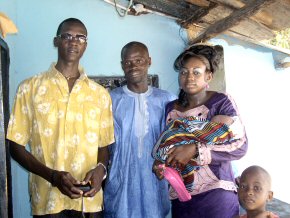 The naming ceremony for the new baby was held on Saturday 27th February. Wandifa phoned on Sunday morning to say it had been a wonderful occasion and hundreds of people had visited during the day. He also told us that the name of the baby had been announced during the ceremony, as is the custom, and that the baby is to be called Ebrima Ian. We were very sad that we could not be present at the ceremony, but Ian is very honoured that the baby has been named after him.

Linda Murgatroyd was there for part of the day, and has sent us these photos.
(Yankuba is another of Pageant's agents) 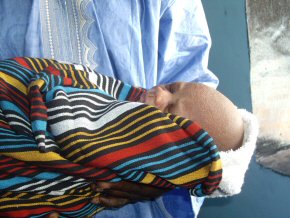 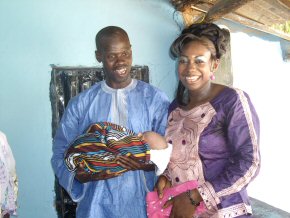 Wandifa, Ebrima Ian and Mariama
Pageant is a UK Charity - Registered No 1093963