When Pageant first started working with schools in The Gambia, we became aware that a major reason for children not attending was sickness in the family, mainly malaria. Pageant therefore began providing mosquito nets for poor families, which reduced the chances of contacting malaria from a mosquito bite, but did nothing to help those who did become infected. Following a lead from Pageant member Elizabeth Fisher, we investigated a 'herbal tea', which is effective against malaria.

The plant Artemisia annua is native to China and has been used there as a cure for malaria for 2000 years. Its leaves and flowers contain artemisinin, which has proven anti-malarial activity. This was isolated from the plant in China in 1971, and is now marketed as an anti-malarial drug. However, the traditional use in China has been in the form of a tea prepared from the leaves. This seemed like the ideal solution for poor communities in The Gambia unable to afford the drug form, but the big problem was that Artemisia annua was not suitable for cultivation in hot climates. The significant breakthrough was the development of a new cultivar called 'Anamed' which is able to grow well in hot weather and still retain its anti-malarial properties.

Elizabeth Fisher has sadly died since she introduced this idea to us, but we feel that the Aremisia Project, which was very dear to her heart, will make a fitting memorial to her.

Start of the Artemisia Project (December 2006)

Anamed International is a German based humanitarian network of development workers, doctors, nurses and healers for the exchange of medical knowledge and experience in the Tropics. They developed the cultivar Artemisia annua Anamed A-3 which is able to grow in most tropical climates, and is currently under cultivation in over 70 countries. It contains not only artemisinin, but several other substances effective in the treatment of malaria. Tea made from the leaves has been shown to be just as effective in treating malaria as artemisinin extracted from the plant. The tea also strengthens the immune system of AIDS patients and helps in the treatment of several other diseases. (more about the Anamed programme) Anamed now produce a starter kit containing seeds, cultivation instructions etc.

However, the seeds are not cheap and they need to be grown carefully, especially during the early stages of growth. We considered this might be beyond the capabilities of the normal village gardeners. If the early growing stages could be carried out by knowledgeable growers in controlled conditions, the young plants could then be given to the villages to cultivate and theoretically grown in every village so the leaves could be harvested providing an inexpensive treatment for malaria.

We realised that before this could happen trials would have to be carried out both to see that the plants would grow and that the benefits attributed to the plants were real. We were delighted to find that the research department of the Gambian National Agricultural Research Institute (NARI) was already running trials and that the plants it had produced showed a good yield of the active ingredient. The leader of the programme had fallen ill with malaria during the summer, had taken the 'tea' made from the leaves and had recovered much more quickly than usual. The people living in the villages surrounding NARI were already starting to ask for leaves for their own use - so, the problem was, how to get it into the villages. 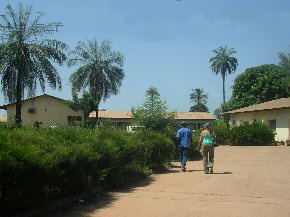 Kemo and Pippa arrive at NARI 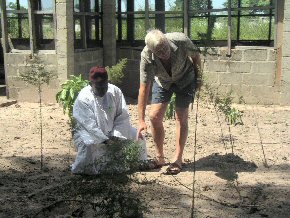 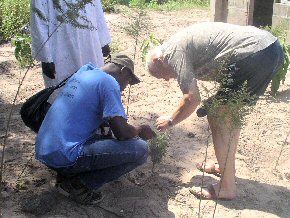 Kemo joins in the discussion 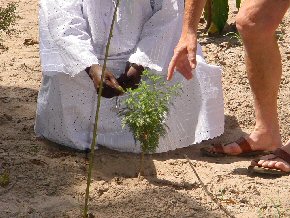 Discussing how to take cuttings

Pippa and Ian visited NARI and were shown round the laboratory and the experimental planting area by Mr Lamin Jobe, Programme Leader and Acting Director of Research and Pest Management, and Mr Momodou LK Darboe, who is the leader of the Artemisia annua 'Anamed' growing programme. The photos show Ian, Kemo and Mr Darboe discussing the plants - these plants were well established and cuttings from them had already been taken.

Following our discussions Pageant agreed to finance a trial programme for five villages. This programme would entail NARI obtaining and planting fresh seed and producing 64 good small plants for each village. These would be planted in an eight by eight square at roughly 1 metre spacing in each village garden - NARI would supervise the planting, explain how to care for the plants and then return to the villages some 3 months later to show the villagers how to take cuttings, pick and store the leaves and generally keep the garden thriving.

Gambian National Agricultural Research Institute (NARI) started training villagers in the cultivation of Artemisia plants. Kemo accompanied Mr Darboe of NARI on some of these sessions. As usual there were more ladies than men, because it is the women who usually look after the gardens. 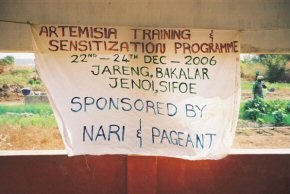 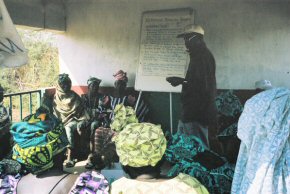 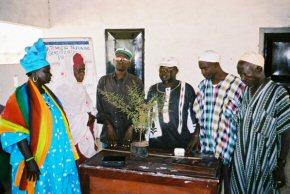 Mr Darboe with some villagers and one of the Artemisia plants 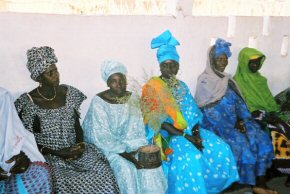 village women with an Artemisia plant 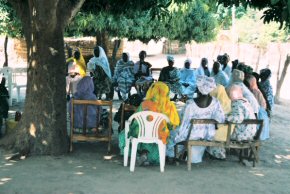 villagers gather under a tree 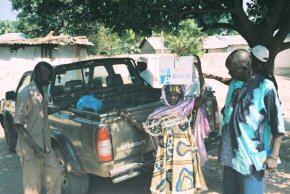 Artemisia plants being delivered to a village 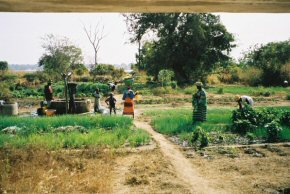 village gardens where the Artemisia plants will be grown 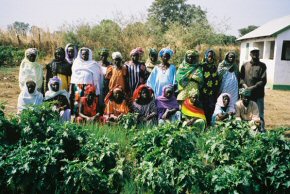 Previously we reported that we hoped to set up a scheme where Gambian villages could benefit directly from plants grown to combat malaria. In February 2008 we saw the first village trials of the Artemisia plants at Bakalarr and the adjacent villages, where small plots had been selected to grow them under different conditions to see what worked best. Both NARI and the villagers were very enthusiastic about the results and we are hoping to extend the scheme to five more villages in the near future. When we visited NARI itself we saw the flourishing artemisia 'nursery' and were able to give the Institute a further batch of seeds to continue their work. 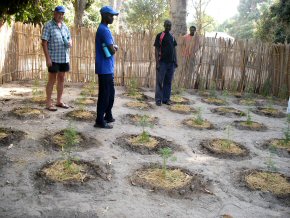 Ian and Wandifa with Kebba, a NARI field worker, at a Bakalarr trial plantation 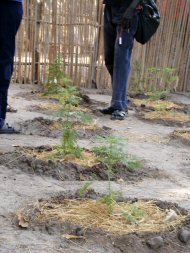 In November 2008, following assurances of success and confidence from the Bakalarr group gardeners, we were able to give NARI the funding for the second group of five villages. This time we asked that the chosen villages should be situated some distance up the river, to enable the benefit to be spread further through the country areas.

As mentioned in our April trip blog, we called in at NARI on our way past one day, to discuss the latest progress with the Artemisia plant project. We were keen to find out how far the NARI staff had progressed with taking plants to the second batch of five villages - had they even started, we wondered? We were assured that they had indeed taken plants to the five selected villages, all of them well up-country. These included Jarreng (which is one of the worst malarial-affected villages in the country and where we have several sponsored children) and Kanikunda, which is Wandifa's original home village. The NARI staff said that plants had been delivered and established at all five villages and that all were doing well apart from those at Kanikunda, which needed replacing. We said that we would be travelling to both Jarreng and Kanikunda during the next week and would be able to see progress for ourselves. We were shown some very healthy nursery plants, some ready for transporting out to farms and villages - Kanikunda, we were told, would have some of these during the next week or two. 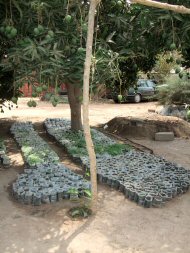 Artemisia seedlings ready to go to the villages 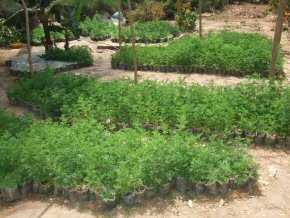 A few days later we visited Jarreng and were shown some of the best Artemisia plants that we had seen anywhere. They were planted out in the walled garden of the Jarreng Skills Centre - at the time we saw them they were surrounded by other, smaller vegetable plants. The head gardener, who took us round the plantation, explained that these plants would be cleared from around each Artemisia bush before they were allowed to go to seed. This would enable the small Artemisia seedlings to be seen easily and to grow unhindered until ready for transplanting. The women tending the garden understood the importance of caring for the plants and were now waiting for NARI to come to explain the harvesting and preparation of the harvested leaves for making the 'tea' that would be used to treat malaria. 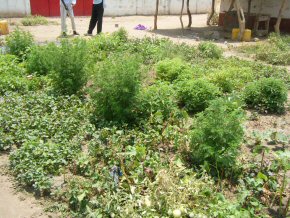 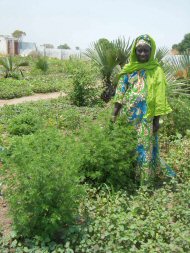 On our way back to Banjul from Jarreng we visited Kanikunda, and here the story was very different. The villagers had wanted to plant the Artemisia in a properly fenced mixed garden in a similar manner to that done at Jarreng. However, the NARI staff had advised them NOT to do this, but to plant them in a small plot on their own. Unfortunately the plot chosen was not well fenced and the goats had managed to get in and had eaten all the plants! So, when the replacement plants arrive, the Kanikunda villagers are going to plant them in the well fenced garden, even if it means they are mixed in with other plants. We felt that, for relatively small scale production as is envisaged for these village gardens, the system of mixed planting appears to be working well enough.

We did not visit the other three villages that had received the Artemisia this time, but understood from NARI that they were all progressing well and were at a similar stage to those we saw at Jarreng. We are now waiting to hear from these villages that they have proceeded to the next stage of the programme - i.e. the explanation of the harvesting and preparation of the final anti-malarial 'tea'.

In January 2012, Pageant appointed Lamin Njie, a young man from Abuko village as an Artemisia Ambassador. Lamin studied at school to Grade 12 and got good marks, particularly in Agricultural Science. He was very keen on 'growing things' and had the reputation in his community of having 'green fingers'. He was highly recommended to us by Wandifa and Abdoulie as being both hard-working and trustworthy. Pageant paid for him to be trained in all aspects of Artemisia annua cultivation at Gambia's National Agricultural Research Institute (NARI). The plan was that he visited villages all over The Gambia to encourage the cultivation of Artemisia annua, giving them a batch of plants as well as tuition on germination, cultivation, harvesting, seed collection and the use of the plant in treating malaria. The idea was that villagers should have a completely self-sustaining means of producing their own Artemisia, without the need to obtain fresh supplies of seedlings each season. Unfortunately this scheme has been discontinued due to circumstances beyond our control.

You can help villages to get supplies of Artemisia plants through Pageant's Ethical Gift Scheme. Just £20 will purchase 100 plants, sufficient to start two village plantations. See our Gift of Artemisia for more information.