When Pippa and Ian first visited Jurunku LBS, the school was a vivid reminder of their first sight of Bakalarr school - two blocks of classrooms, a derelict kitchen and two small buildings housing one toilet for staff and one each for boys and girls, all in an un-fenced sandy square. There was a circular structure in the middle of the square, which had been a small staff-room - unfortunately the concrete pillar in the centre had broken off at the base and the thatched roof that it had supported had been destroyed, so there was now no shade. 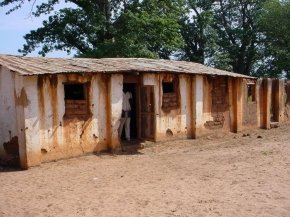 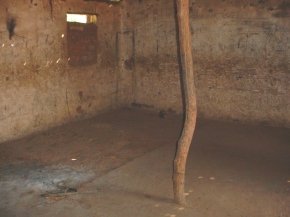 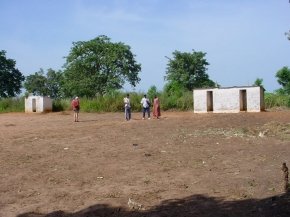 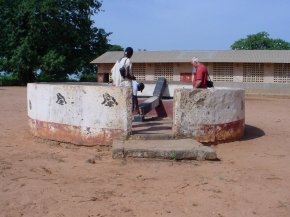 remains of the staff room

They had visited the school at the request of Pageant member, Jon Quinnell, who had met Lamin Jammeh, a young Gambian, while on holiday and had decided to help the school in Lamin's home village - Jurunku. The headmaster (Mr Keita) had been warned in advance of the visit and had provided a list of various projects - perimeter wall, new kitchen, new toilets, fencing of the garden, provision of a well and so on. He was told that Jon wished to start with a small, trial project and would continue with further work if the results of this first effort were satisfactory. It was obvious that the classrooms in one building were in urgent need of renovation - the floors had crumbled and returned to sand and the blackboards had large holes in them. 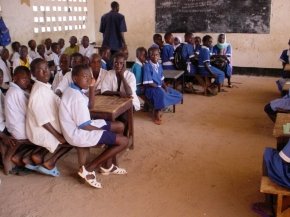 one of the classrooms, showing sandy floor 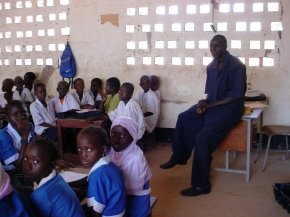 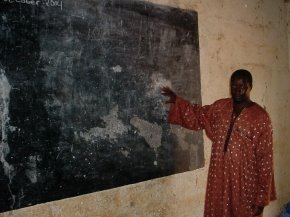 blackboard with lots of surface missing 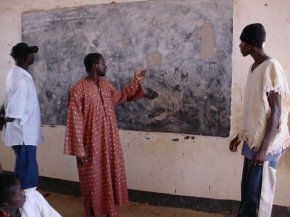 Pippa and Ian left £100 with Pageant's agent Kemo so that cement and other materials could be bought and as much work as possible could be completed by the time of the next visit, feeling certain that Lamin and the headmaster would ensure that the project progressed well and that it would encourage the village community to help with the improvements to their school.

November 2004 - Progress on the garden wall

Pippa and Ian visited Jurunku LBS again in November 2004. This is a summary of the report of their visit, which you can read in full by following this link.

When Pippa and Ian arrived, all the children were waiting at the edge of the village, jumping up and down, waving and singing. They were led to the school and were welcomed by the Headmaster and shown the improved classrooms. They then visited the school garden which was heavily overgrown but had been cleared of bushes and undergrowth. A wall around the growing area had been started, but progress had been slow because everyone had been busy in the fields with the groundnut harvest. It was suggested that a local mason should be employed to speed up work on the wall, rather than depend entirely on volunteer labour from the villagers. 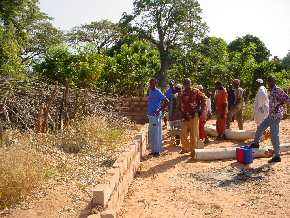 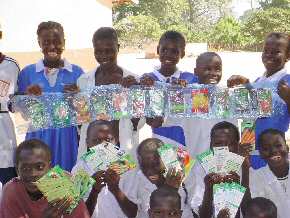 Jurunku children with the 'seed banner' 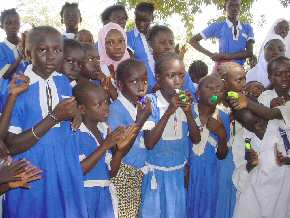 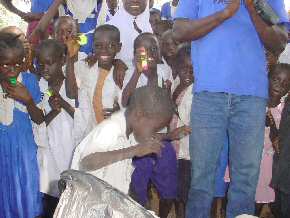 Since the first visits, Pageant member Jon Quinnell had appointed Lamin Jammeh, a young man from Jurunku, as the local overseer of the projects. Lamin sent us photographs of the villagers assisting with the first task - re-concreting floors and renovating blackboards in three of the classrooms - and it was very pleasing to see that this was indeed a community project. 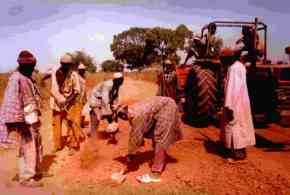 gravel for making the concrete 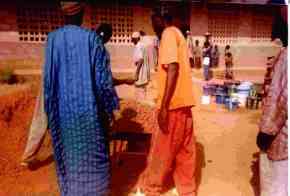 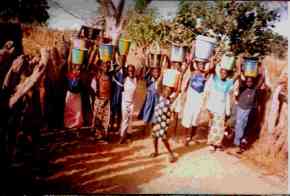 everyone lends a hand bringing water a new concrete floor being laid

Pippa and Ian visited Jurunku themselves in March 2005 to see progress at the school. They found that the bulk of the concrete had been laid on all three floors but still required the final screed to be laid. The blackboards had been remade but the painting had not been completed. They met the Chairman of the School PTA Committee, Ebrima Sonko, who was clearly delighted that the school was receiving some assistance and was determined to make the best possible use of it. It is essential to form a good working relationship with the Chairman of any school, particularly in the up-country villages, as that the person provides continuity. Headmasters come, may stay a year or two, and then pass on, but the Chairman remains and provides a vital link with the village community served by the school. 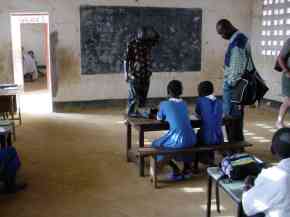 new concrete floors in a classroom 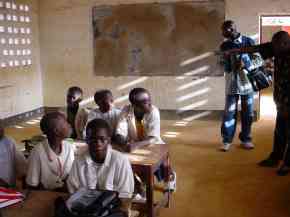 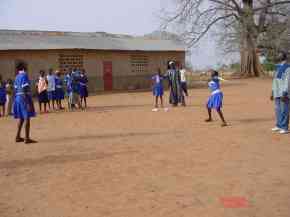 Jon Quinnell himself (or Jurunku Jon as he is now called!) and his wife Shirley visited the school in March, together with Linda & Doug, some friends they had made at their hotel. They were delighted with their reception and the way that the work had been done to improve the school. By the time they arrived the blackboards had all been painted and the floors prepared for screeding. They approved the funding of the completion of the floors and have left enough money to clear the large school garden area of undergrowth and to rotivate it ready for planting. Jon arriving at the school 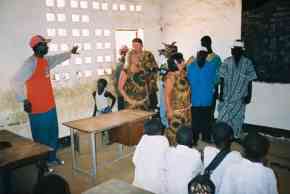 Jon and party inspecting the work 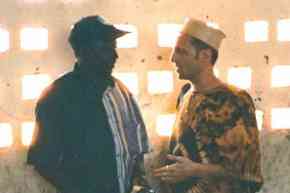 'Jurunku Jon' talking to the Headmaster