During their Gambia trip in February 2006, Pippa and Ian visited Jurunku LBS to inspect the refurbished 'staff room' and new garden wall as well as donating football kit and other gifts.
Read more about this visit 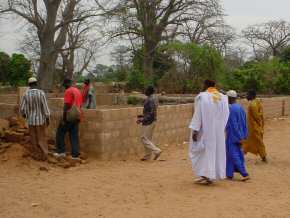 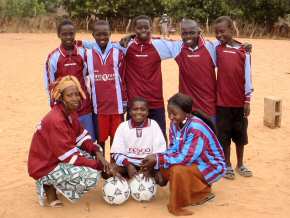 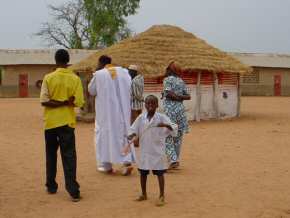 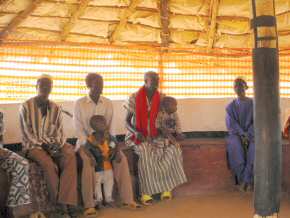 inside the staff room

A priority for Jon Quinnell (or Jurunku Jon as he is now called) has always been to renovate and make use of the considerable area of garden behind the school kitchens. In December 2005 work was completed on fencing the garden area to stop animals spoiling the crops being grown.

Jon was very keen to see donations used by the people of Jurunku to increase the self sufficiency of the school. To this end Jon, together with two friends Linda and Doug Greensit, worked hard with the villagers to introduce a solar-powered supply of water to the village and to the school. The project was not without the inevitable disruptions associated with undertaking projects in the Gambia. For example, at first it seemed that no borehole companies were prepared to travel to the North Bank to undertake the work. Another problem was that an existing borehole had not been used due to the water being contaminated with salt. (There are tidal creeks close to Jurunku) In the end it was found that the borehole was not contaminated and so could be used in the project.

The water project was completed in June 2006, and opened by Jon himself during a trip to the village. The contractor carrying out the work suggested that the new system required very little maintenance, save for additional battery acid every 4-5 years. The villagers established a Water Committee to oversee the management of the water system. Jon made it clear that the villagers themselves should make sure of the longevity of the project, and the Committee members decided that each person in the village should pay 10 Dalasi each month for essential maintenance that may occur in the future. 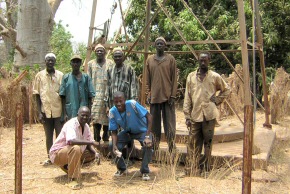 the Committee at the borehole 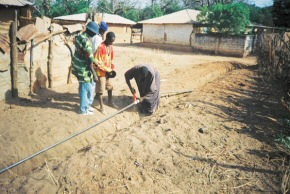 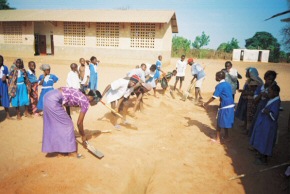 everyone helps filling the trench 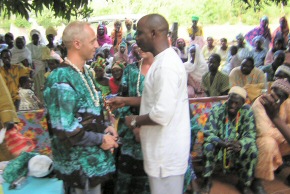 Jon at the official opening

The opening ceremony was attended by many people, and Jon reported that the celebrations continued until past 4am (Jon added that he was finally allowed to retire to bed at around 2.30am). The Headmaster of the school, Mr Keita, estimated that the garden area would produce sufficient crops to feed the children and to create at least 16,000 Dalasi each year from the sale of excess crops. This money would be used to purchase much needed equipment for the school. Much still needs to be done in Jurunku but Jon and his fellow supporters are very pleased with the excellent start that has been made in this wonderful village.

Pippa, Ian, and Jon Quinnell visited Jurunku on Saturday 24 Feb 2007. This is Pippa's account of their visit:

"On this trip we decided to visit Jurunku with Jon Quinnell, who was also in The Gambia at the time. Jon has his own small four wheel drive vehicle, so we thought it would be a good idea to make the trip with him and Lamin, thus avoiding the cost of a taxi. That was the idea - but as so often happens in The Gambia, the day did not quite turn out as planned!

Jon could not manage any other day but the Saturday, but as he knows the village so well by now, the fact that it was not a school day did not present a problem. Jon called for us at our hotel at 6.15am, so that we could catch the first (or at least the second) ferry...BUT... it was 'clean up your environment' day in The Gambia, which means that no transport is allowed to move between 9.00am and 1.00pm, while everyone clears the litter from around their own home and / or place of business. So, the ferry was not allowed to run either... so, we had to be aboard the one that left in time to dock at Barra before 9.00am. We were there in plenty of time - but sadly, it appeared that the whole of Banjul also wished to cross before 9.00am and the queue was ENORMOUS. Eventually we managed to get the Naval Dockyard (adjacent to the ferry docking station) to allow us to park Jon's car in their vehicle park, we were rushed out of the back of the yard, over the sea-wall, across the sand, jumped onto the last pre-9.00am ferry - and it cast off! All this while carrying the large amount of packages we had decided we could take to Jurunku as we had our 'own' transport!!

So, when we arrived in Barra (just before 9.00am) we had to find a taxi that could take us (4), our mountain of packages AND could leave Barra before the 9.00am curfew. We JUST squeaked out of the town and through the police checkpoint in time... all went well until about 100 yards before the turn-off to Jurunku, where we found a sneakily installed temporary police checkpoint, just there for the morning - and they, of course stopped us!! Not only us, but several buses, farm vehicles (interestingly, the ox-pulled carts were allowed to proceed - perhaps it was their very long and sharp horns!) and a couple of other taxis. After about an hour's animated discussion we and all the other vehicles were allowed to leave, but only after the drivers had given their precious driving licences and other documents to the police, to be collected at a particular police-station later in the day.

We arrived at Jurunku somewhat later than planned! A large number of schoolchildren (many in school uniform, even though it was Saturday) came running to meet us and an even larger number of villagers all came up to the school and crammed into the small circular 'staff-room' that had been refurbished a year or so before. We had a tour of the school garden, which is doing really well now that the plot is walled and the water supply has been installed. The headmaster was at pains to tell us what a difference the garden had made to the school - and to the village, as the surplus vegetables could be sold at a lower-than-normal price to the local families, which meant money for the school and food for the villagers. (Loud applause from all at this juncture!) The water supply was also inspected - this meant a tour of the village, as the water supply pipeline has five taps coming from it, one at the school and four at different points in the village. This has obviously made a big difference to the village - the supply of water is not unlimited (the taps are padlocked for parts of the day so that the water level in the solar-pumped system can build up again) and, of course, they would like more taps, but the installation has been a great benefit to this small, isolated village. 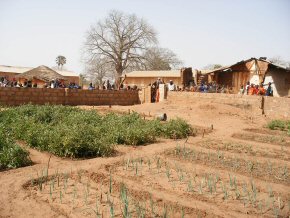 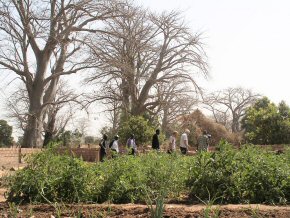 crops in the garden 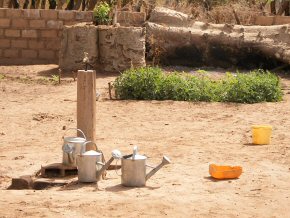 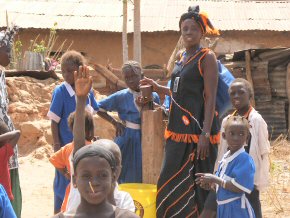 Our next project at Jurunku will have to be the school kitchen - it is now completely derelict, so Jon has asked for an estimate for rebuilding it. 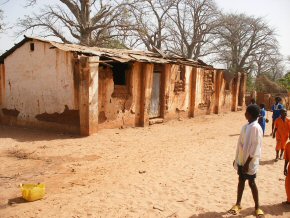 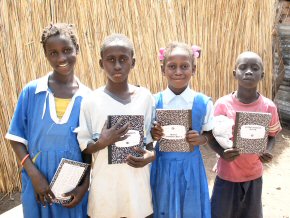 children with their gifts of exercise books

After our tour we went to visit Lamin's compound, and distributed a large number of the gifts that had been bought with the Christmas Gift Tokens - Jurunku is one of the poorer villages that we visit, so it seemed fitting that many of the gifts should come here. We enlisted the aid of the PTA chairman and members of the village committee to make sure that the gifts went to really needy people, and we were delighted to see the smiles of thanks for the things we had taken - mosquito nets, cooking pots, exercise books and school-bags on this occasion. 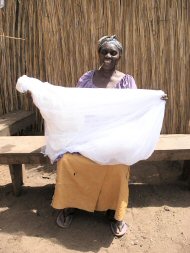 gift of a mosquito net 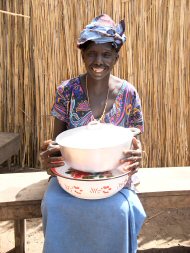 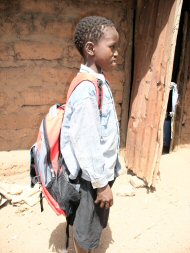 gift of a school bag

We also took the beautiful quilt made by Doreen, one of our members, for the boys of the family of her sponsored child, Lang, to sleep with - she had shown it to us all at our AGM and we could now give it to the family for whom it was made. They were SO delighted with it - Lang's mum could not believe that it had been handmade specially for her family and when we left them they were all sitting with it spread across them, running their fingers over the decorated panels and pictures. Doreen says she will make one for the girls next time.... 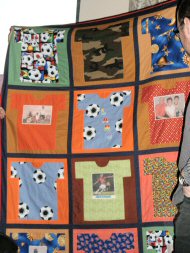 close-up of the quilt at Pageant's AGM 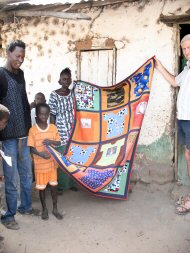 the quilt received by Lang's family

Having had some lunch at Lamin's compound - or was it breakfast? - we left for Barra, stopping off for the driver's papers en route, of course. This took some time, as the policeman who had the papers had gone to the market and had to be tracked down! We eventually caught the ferry at about 6.00pm, rescued Jon's car from the Naval yard (we gave the sailors a couple of toys as a thank-you, with which they were delighted - when we left they were pulling rank on each other to determine who finally got the goodies!) and arrived back at the hotel in our normal hot, dusty state. I often wonder what the other hotel guests think of us - they have all showered and dressed for dinner by the time we get back... A good day on the whole, considering its unpromising start - and the Banjul streets DID look a lot cleaner than when we left for Barra."