Science in The Gambia is taught almost exclusively as a theoretical subject because the schools generally have no resources to buy equipment for practical lessons. Since Pageant's earliest days, we have taken a number of microscopes to a few schools, colleges and a teaching hospital laboratory in The Gambia. These microscopes were either bought or donated, and were taken out as and when they became available. Some very good results were obtained, usually as entries to competitions for drawing things seen under the microscope. (See links below for more details) However, we were sometimes concerned that not all teachers fully understood how to get the most benefit from microscopes. Pageant's Microscopy Workshops are designed to pass on essential know-how, as well as supplying basic microscopes to schools which do not have any.

Organisation of the workshops

We wished to increase the number of Gambian schools able to benefit from practical microscopy and to do so in a more structured manner. To achieve this we wanted to run workshops at which the school-teachers (most of whom have not used, or even seen, a microscope themselves) can learn how to use microscopes and to look after them properly - and then to teach their students. Our Practical Microscopy Workshops were planned in a similar manner to the very successful Practical Science Workshops run by Joe Brock in February 2007. However, the cost of such an exercise was considerable and we were not able to afford it from our general funds. However, we had recently been awarded £3,000 by the Royal Microscopical Society (RMS) Vice President's Fund, which enabled us to run the first workshops in February 2010.

Three RMS Fellows (Peter Evennett, Kathy Groves and Pippa Howard) headed the UK team running the workshops, assisted by two retired teachers and three other PAGEANT members - almost all of the cost of the flights and hotel expenses for the trip was met by the participants themselves, leaving the bulk of the sponsorship money available for buying microscopes. The four schools at which the workshops were run were chosen so that they could each be host to teachers from ten schools in different regions within The Gambia, thus spreading the benefit as widely as possible. The host schools were selected during a visit to The Gambia in October 2009, following discussions with their head-teachers, all of whom were very enthusiastic about the idea.

Find out more about equipment needed and schedule for the workshops, and also have a look at Kathy Grove's blog posts during and after the Workshops 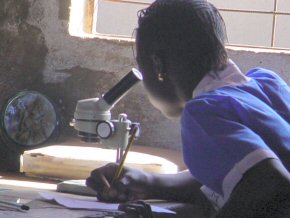 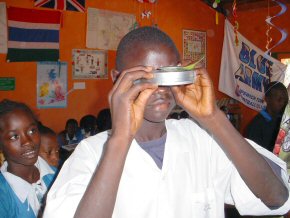 Each of the 40 participating schools were given a range of microscopical equipment bought with the fund and donations (the precise mix depending on the level of support from the suppliers and any further donations we may receive). This equipment was available to the teachers during the workshop and was then given to them to take back to their own schools. Many of the schools did not have access to electricity or other facilities that we take for granted, so the microscopes needed to be simple, robust and easy to illuminate. Previous experience showed that Gambian schools had found simple monocular or binocular 'stereo' microscopes and Trekker field microscopes to be the most useful.

Printed notes on the operation, applications and care of the microscopes were be supplied to each teacher as well as a certificate of attendance at the workshop. As well as the microscopes etc, each visiting teacher was paid a sum to cover travelling expenses and also each host school was given an allowance for feeding the visiting teachers and UK team.

Thanks to suppliers and others