Many schools are now offering the International Baccalaureate. This qualification is roughly equivalent to four AS levels, but covers a broad range of subjects. As its name suggests, the diploma is international, and it is currently (2008) offered by 2,293 schools in 127 countries. The Creativity, Action and Service (CAS) requirement is a fundamental part of the IB programme.

Students are expected to be involved in CAS activities for the equivalent of at least three hours each week during the two years of the programme. One of the CAS projects at Oakham School in Rutland, UK is Toilets and Textbooks. This aims to provide a school in The Gambia with textbooks and a new toilet block. The project is being undertaken by 16 students from Oakham School and the Copenhagen International School, (CIS) in Denmark. The school chosen by the project team is Kings Kid Academy in Lamin. Pageant has been helping this school in many ways since February 2006. KKA initially provided just nursery education, relying entirely on private funding. The school is expanding year by year, so that children will remain there to complete their primary education in Grade 6. In 2006, the school was in a poor state of repair, with inadequate facilities. Through Pageant, various donors have since provided new floors, windows and furniture. 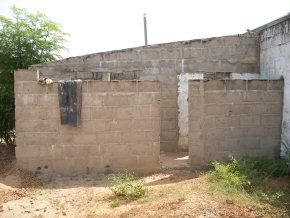 the existing toilets - outside 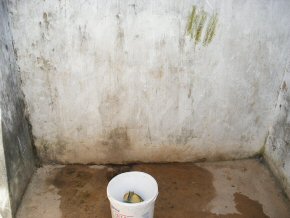 the existing toilets - inside

In September 2007, the IB group at Oakham School joined with Copenhagen International School to develop three projects for each school. After presentations of candidate projects, the 'Toilets and Textbooks' project and two others were selected for implementation.

In November, the groups worked on finalizing their projects, investigating contacts in the different countries, checking for any problems, such as Malaria, and looking at accommodation, flight costs and exactly what they were going to do on the project. 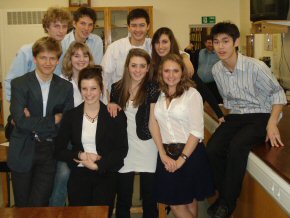 students from Oakham at the conference in January 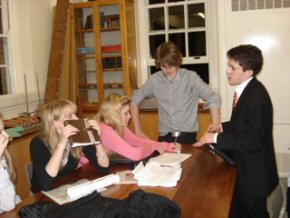 students from Copenhagen at the conference 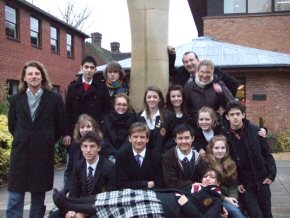 In February, an Open Day was held for the younger students at Oakham School. A toilet was used as a collecting box, and £50 was raised.

On March 20th to 23rd, Oakham students visited Copenhagen to discuss final dates of travel, accommodation, fundraising and things that needed doing before the trip to The Gambia in summer 2008. The dates selected were from 8th to 25th July, with a possible 'phase 2' at the end of July - beginning of August, if sufficient people could travel then.

The conversions from Dalasis to Pound Sterling below have been calculated using an exchange rate of 38 Dalasis to the Pound. These amounts could change as exchange rates vary. Check the latest rates here.

The estimate for the materials costs in constructing the new toilets amounts to 40,565 Dalasis (about £1,070). The students will be carrying out the construction work themselves, but will require the services of a local workman at 150 Dalasis (£4) per day, to show them what is needed and how to do the work. The team will also be decorating some classrooms and working in the garden if they have time.

Team members will also have to pay for their flights, vaccinations, accommodation, food and transport. As far as possible they are planning to stay with local families or in guest houses.

All members of the team, both in Oakham and Copenhagen, engaged in active fundraising, with ideas such as a 'money toilet', 'money pots' by the cash register in local shops, contacting companies for help and selling wristbands and other merchandise. They had raised a total of £4781.87 for Pageant by the end of September. £1500 has already been sent to Kings Kid Academy for the toilet project, leaving £3281.87 in the bank. Pageant continued to receive occasional donations through CAF. The T&T team will decide later how they wish the remaining money to be spent. Carina, Gemma and others are hoping to visit The Gambia later this year to see the progress at KKA. 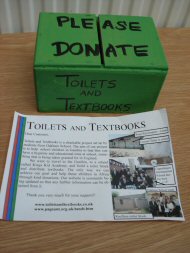 Donation box in a local shop

Sponsored runs in support of TandT

On 25th May, Graham Ley took part in the Edinburgh marathon. He completed the race in 4 hours 11 minutes. Sponsorship money is currently being collected.

Pageant has now closed the online donation facilities for Toilets & Textbooks, and for sponsoring Nigel.

For a number of reasons, it won't now be possible for the team to fly out to The Gambia in July to construct the new toilets at Kings Kid Academy. However, the project is still continuing and extra money will be made available to pay for local tradesmen to build the toilets. Provision of textbooks is largely unaffected. The team are of course very disappointed and the village community will be sorry that the team are not be coming to see them in July.

At the end of September, the total raised had reached £4781.87, of which £1500 had already been used to build the toilet block at Kings Kid Academy. Pippa and Ian will be checking on progress during their October visit, and some of the T&T team hope to make a visit later in the year to see the work and decide how the rest of the money will be spent.