In The Gambia, science subjects are usually taught in schools as purely theoretical subjects. This is because most schools do not have the facilities or equipment for practical science lessons. Pageant has channelled donated science teaching equipment to many schools and has also organised seminars and workshops for teachers, who up to then had little experience of teaching practical science.

The first Practical Physics Seminar was held in February 2006, using equipment donated by Collyer's School in Horsham. Joe Brock, Head of Science at Collyer's collected the equipment together, and also wrote a teachers' manual 'Basic Science for Gambian Schools' and another manual for electronics experiments. By the following year, Joe had produced another book containing 73 experiments. Experimental kits of low cost items were assembled and packaged for each of 40 schools. In February 2007, Pageant held a series of Practical Science Seminars to show teachers from these schools how to get the best from their kits.

In February 2010, Pageant organised a series of Workshops in Practical Microscopy, with the help of a grant from the Royal Microscopical Society. Again teachers from 40 schools were involved, and each received microscopes and other equipment to take away after the workshops.

In April 2010, Pageant received a magnificent donation of science teaching equipment worth £13,000 from Technology Supplies Ltd. (see news item) It was all brand new and they even packed it onto pallets for us and sent it direct to the shipping agent. There was so much equipment that Gambian schools would never have seen before, that Pageant decided it could not just be handed over without showing teachers how they could get best use from it. All the equipment was shipped out to The Gambia in June 2010. Pageant arranged for the Gambian Ministry of Basic and Secondary Education (BSE) to collect it, get it through Customs and store it for us until needed. In October 2010 members of Pageant met the Permanent Secretary for BSE and his head of Science Education, and agreed that Pageant should run Practical Physics Workshops in February 2011 for a group of 'students' comprising teachers and student teachers at the Teacher Training College, Gambia College in Brikama. Once again Joe Brock 'came up with the goods' and produced teaching notes for the workshops, and also sourced essential items to fill gaps in the donated equipment.

The Pageant team was again led by Joe Brock, Head of Science at Collyer’s Sixth Form College in Horsham, assisted by Sheila Hill, a retired Maths & Physics teacher, Chris Robertson & Pippa Howard, both physicists (but not teachers), Ian Howard and Anne Jackson, both teachers (though not of Physics).

Ian and Pippa arrived in The Gambia first, followed by Chris and Anne. Together with Pageant's wonderful Gambian crew, they unpacked and sorted the equipment. 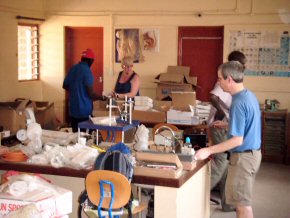 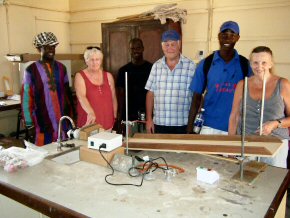 Workshops were held over three days - Saturday 26, Sunday 27 and Monday 28 February 2011 - with four different topics on each day. The students were split into four groups of six, and rotated between the topics, so that by the end of the workshops, they had all studied all twelve topics

On Saturday, the topics were: 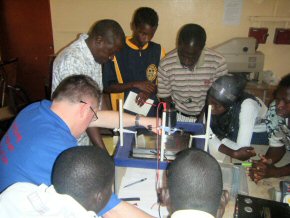 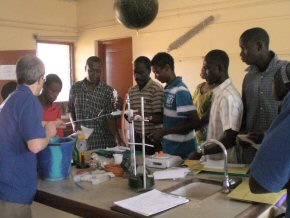 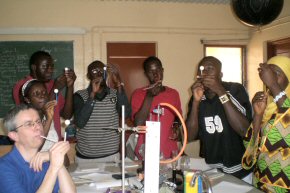 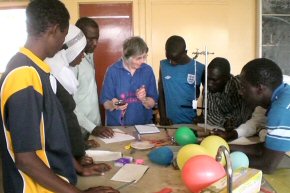 Sheila - what is electricity? 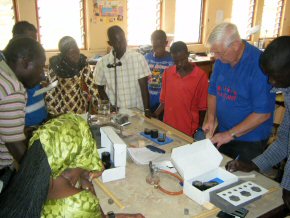 Ian - finding the mass of an object using lever law 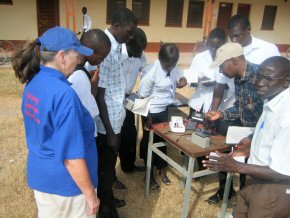 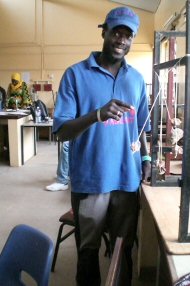 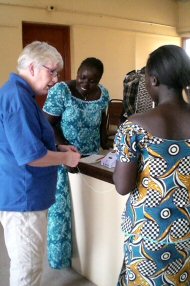 Anne - finding the time period of a pendulum

At the end of each day individual students gave a demo 'lesson' on one of the topics they had studied. The improvement over the three days was dramatic! On the last day the students improvised a thank-you drama showing how not to teach (all from the blackboard) and how to teach better (using practical methods). There were no complains about the enthusiasm of the participants. The main problem was getting them to stop for lunch.

Hard work, but worth it if the student teachers retain there enthusiasm when they go to their schools.

Afterwards Joe Brock wrote to the donors of the equipment:
"A HUGE THANK YOU to Technology Supplies for this wonderful offer - we are truly grateful for it. The equipment donated by Technology Supplies Ltd has allowed the Gambian teacher training college to be as well equipped as a college in the UK. With the addition of a number of smaller items, such as leads, the number of experiments that can be done with the donation is huge and will cover the equivalent of O and A level specifications well. This will transform Gambian teaching in the long run. The enthusiasm shown by the teachers for the experiments will transform a culture where science lessons are seen as dull and boring into one where lessons inspire the thinking of future scientists and engineers. Thank you so much on behalf of PAGEANT and the people of The Gambia"

Nakulang Ceesay, Head of Science at Gambia College, came on the workshop as a student himself. Afterwards he said, in an interview with Sainey Darboe for 'Today' newspaper:
"In the past very little practical science has been taught to Gambian students, mainly due to lack of equipment and trained teachers to embark on successful experiments. What we want is for the teachers to not only talk about science to the students but show them how to do it. I believe this is the best way to promote Science education among the school children and fire their imagination and creativity to make scientific innovations that will move us forward as a nation. I feel that these workshops and equipment will help build the capacity of the trainee teachers to take the new skills they have learnt to the pupils in their various schools in the very near future."

Links to other seminars and workshops and to further information

Chris Robertson kept us up-to-date by posting to our News Blog. See below for links to his posts.