Pageant organised an exhibition of paintings in Horsham Library from 10-24 March 2007. The pictures were original paintings in watercolour and gouache by an A-level student, Ousman F Sowe, of Essau Senior Secondary School in The Gambia. Ousman's artistic talents first came to Pageant's attention when Pippa and Ian paid one of their regular visits to Bakalarr School in February 2004, and saw some of Ousman's paintings on the newly erected perimeter wall. (see the wall paintings) Since then we have featured more of Ousman's work on this website.

Ousman has been selling his pictures in The Gambia, and also here in the UK through Pageant. The money he has raised has enabled him to pay for his own education and also that of his younger brother, and he also contributes to the family budget. The exhibition in the foyer at Horsham Library marked the 200th anniversary of the abolition of slavery. Ousman lives near the old slaving route, close to Juffureh, the village of Kunta Kinteh (of the book 'Roots', by Alex Hailey). Many of his pictures depict aspects of the slave trade. The exhibition was set up by Pippa, her Mum (Joan), Tina and Catherine on, as shown in the photos below. All paintings were for sale, and prices were very reasonable: unmounted picture £10, mounted original picture £12, framed original picture £20. A4 size prints £3. 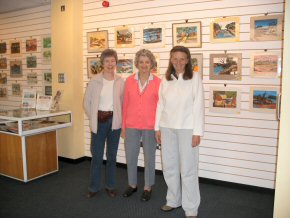 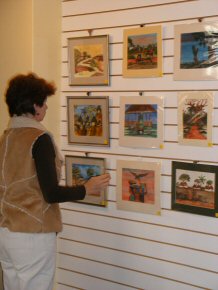 Tina checking the pictures are level 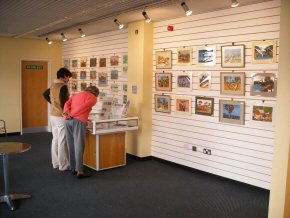 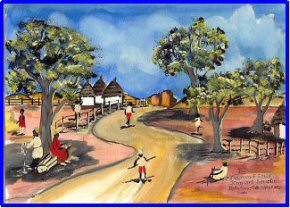