Pageant visited Bakalarr in December 2004 and February 2005. This page combines reports from both visits.

"We were welcomed to Bakalarr by lines of singing children flanked by smiling teachers, village elders and parents and spent a wonderful day of celebration in the school that we have come to know so well." 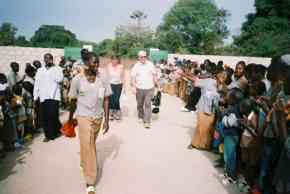 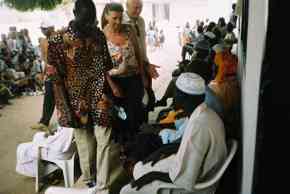 Bakalarr BCS has a number of new projects, the most important of which is a new building. Previously, the headmaster had a very small office sandwiched between two classroom blocks and the deputy head had a desk in what was no larger than a big cupboard on the other side of the school. There was no staff-room for 35 teachers, no secure storage space for equipment and materials, and no designated rooms suitable for teaching Science or Home Science to the required level. A library had been started, but was squashed in around the walls of one of the classrooms. Work started on the construction of two classroom blocks in April 2004. On our visit, we were delighted to see the two new classroom blocks that had been completed by the State Education Department, using funds provided by 'Future In Our Hands'. The new classrooms have been built to a high standard and are light and airy, with well-made desks for the children and a table for the teacher. 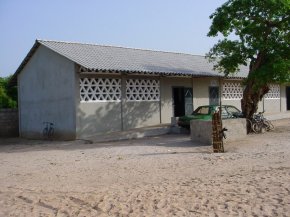 The headmaster, Mr Gitteh, has a new office in this building and there is also a small storeroom for materials. Bakalarr is now almost unrecognisable as the school we found on our first visit in February 2001 and it is very rewarding to see how the improvements have given such an boost to the attitude of both staff and students.

The Home Science Lab opened in 2005. This was a project carried out in memory of one of our earliest members, Joan Saward. Joan loved the Gambian people, particularly the children, and was a keen seamstress herself. Her family asked for donations to be made to Pageant, and it seemed appropriate to use the money sent to provide a dedicated room at Bakalarr where those children opting for Home Science, so that they could work undisturbed by other, less interested pupils. The chosen room has new louvered windows that can be closed to keep out the dust, a lined ceiling, curtains at the windows, a smooth concrete floor that is to be painted to seal it and freshly painted walls. 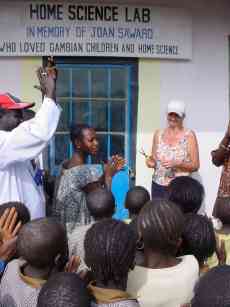 The sign above the door has been beautifully painted and Pippa was very pleased to be asked to cut the ribbon for its official opening. More sewing machines for use in the Lab are in the container currently on its way, and we have already sent some large tables that can be used for measuring and cutting fabric. 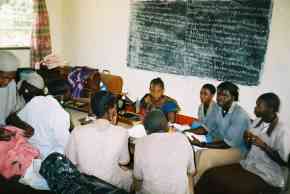 The multipurpose court (The Gambians call it a lawn, but it is made of concrete!) was constructed in the central playground of the school. The area for the court had been pegged out and levelled by the time we arrived and the first lorry-load of gravel arrived while we were there. 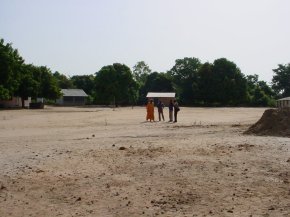 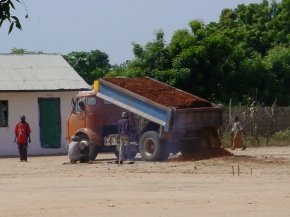 a load of gravel arriving 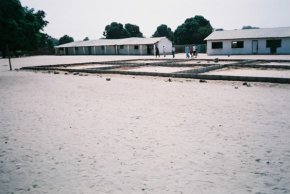 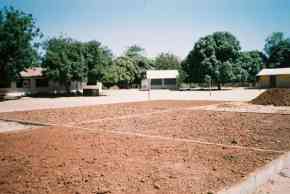 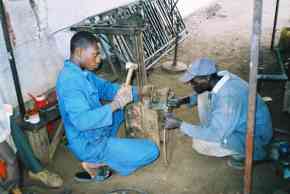 The court is be used for basketball, volleyball, tennis, handball and badminton. The basketball posts were made locally and the court is marked out with different coloured lines for each sport. The central posts for the various nets can be easily removed. The senior sports-master, Mr Jawla, is delighted with the addition to his sports facilities. Pageant took basketballs, handballs, volleyballs, tennis balls and shuttlecocks and Ian performed the official opening of the court - it seems a far cry from our first visit to Bakalarr, when the only piece of sports equipment in the school was one deflated football! 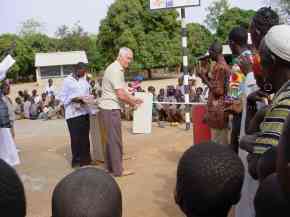 Presentation of the gifts

These gifts were from a group of children who had given up the Christmas presents they usually got from one of our members, Joelle, so that Bakalarr could receive some specially chosen items. On behalf of Joelle and the children, we presented Bakalarr with fourteen sets of football kit, three goalkeeper's shirts and gloves, footballs, an Inter-House Sports Trophy and 1st, 2nd and 3rd medals for overall performance in sport for both boys and girls. These gifts were received with the biggest cheer we have ever heard at Bakalarr and several members of the football team immediately donned their new kit to pose for some photos.

Pippa with the Inter-House Sports Trophy 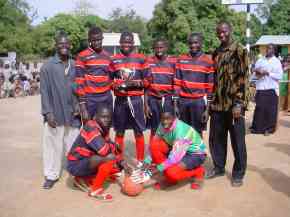 In the first picture. Pippa is holding the Inter-House Sports Trophy, and Joelle's medals are hung around the 'skeleton'. This was part of the materials we took for the Physical Science theory lessons for Mr Jawla, seen at the left of the second picture. We also took a torso with organs that you can put in and take out and lots of posters showing muscles, bones, blood flow - you name it, we took it! 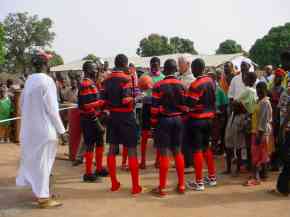 Ian chats with the team 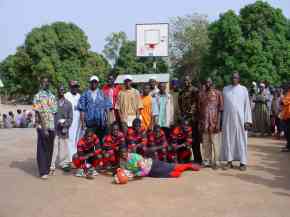 football team and teachers pose on the new multi-purpose court

We explained the way the gifts had been donated and since our visit the Bakalarr children have written letters to each of the UK children involved.

Joelle's Gift Scheme idea was to send a voucher to each child that would normally have received a gift from her. This voucher outlined the problems faced by children at Bakalarr and described the items that would be sent in their names. Pageant subsequently took up this idea, and has put in place an Ethical Gifts Scheme, with a range of items that can be donated in voucher form.

At the end of our visit the children sang a 'Goodbye' song written by one of the Bakalarr teachers - it was a very moving end to what had been a particularly special day in our trip.

On our return home from The Gambia we found an email waiting for us from a Dutch couple, Wim and Dorothé van Dijke. They had seen our website as a result of surfing the net for references to Bakalarr, as they also wished to help the school. Since then they have visited Bakalarr themselves and have arranged solar powered lighting for one of the classroom blocks and Mr Gitteh's office, given the school a laptop and a quantity of consumable materials and funded some improvements to the well. We look forward to seeing the results of their generosity in February. We are hoping that we can persuade Wim and Dorothé to spread their endeavours to some of the other schools that need assistance and look forward to meeting them in the not-too-distant future.