Bakalarr Basic Cycle School, in the North Bank Region, serves five local villages. Like most rural schools in The Gambia, Bakalarr BCS has always had a vegetable plot, using it to produce food and as a teaching aid in science and agriculture. The gardens became much more productive after the school boundary wall was built, giving protection from wandering animals. Nearly all school gardens rely on irrigation from wells and boreholes. Bakalarr's very successful vegetable gardens also relied on a well for irrigation, though the school has a piped water supply for cooking and drinking.

Bakalarr School had a supply of water piped from a borehole outside the school grounds, which they used for cooking and drinking, and which also supplied the surrounding community. Increased demand meant that this supply often runs out before the end of the day, and there is certainly not enough water for the school vegetable gardens. Luckily, they had their own well on the school premises. The water was not drinkable, and was used solely for irrigation. However, the flow from this had decreased and the crops were suffering through lack of water. The photos below contrast the healthy crops ten years before, with those of 2013. The solution to the problem of the failing well was to have it re-bored, to provide sufficient inflow of water for all their requirements in the foreseeable future. They are also proposed to install a water storage tank, so there was always a reserve of water. 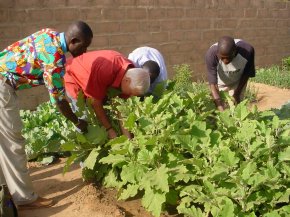 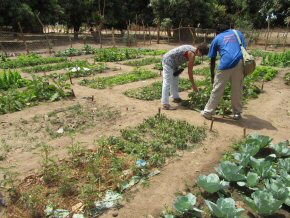 crops suffering from lack of water in 2013

The cost of re-boring the well and installing a storage tank was estimated at £2050. Pageant launched an appeal to raise this, and were able to kick-start it with money raised by Gavin Sandison when he ran the 2012 New Forest Half Marathon [further details] He raised a total of £785. Of this £390 was added to another appeal to install a solar powered water pump at SHM Nursery School in Gunjur [see details] leaving £395 which he has generously assigned to the Bakalarr well appeal.

Vegetable gardens are very important to Gambian schools and a lot of effort is put in by both staff members and children. Many of the vegetables are used for school meals, while some are sold to provide funds for school resources. In addition to this, the gardens provide a valuable teaching resource for the agricultural science programme. Our appeal aimed to bring the Bakalarr vegetable gardens back to full vigour, making a huge difference to the quality of life in the school. Unfortunately the appeal didn't reach its target, so Pageant paid the remaining costs of the re-boring Bakalarr's well out of general funds.