The 2012 Microscopy and Science Workshops were held simultaneously in two rooms at Gambia College over four days - 11th to 15th February 2012. Gambia College is located in Brikama, a town about 20 miles south of the capital, Banjul, with good tarmac road access. Each room accommodated 20, so each of the 80 student teachers attending spent one day at the Microscopy Workshop and one day at the Science Workshop. The Science Workshops were divided into five topics; Moments, Chemistry, Radioactivity, Electronics and Waves. This is Jayson Probin's report on the Electricity Topic.

On our electricity table we had 5 sets of our 'Teaching Electricity Anywhere' booklet and our circuit equipment kit. The kit contained: 1 wind up torch which we converted to work as a power supply; 1 converter block to connect the torch to the circuit; 6 wires, 3 bulbs; 4 resistors; 2 multimeters; 1 thermistor and 1 light dependent resistor. Both the booklet and the kit were designed and built by Collyer's students with Dan Mannion being in charge of the electrical equipment team and myself being in charge of the booklet team. Needless to say we were very relieved that all the kit had survived the flight intact and was all in working order.

The model we were getting the trainee teachers to learn, for when they eventually get posted to a school and teach themselves, was called the "Lamin's Loaf Lorries Model" which we developed as an easier way for teaching electricity. Instead of teaching electricity in terms of electrons and charges, which even students in the UK find difficult, our model enabled us to teach electricity in terms of objects they saw in their daily lives such as Lorries and bread loaves. Once they were able to grasp the basic ideas behind the model the trainee teachers were amazed at how much easier the teaching became and they began to fly through the lessons in our booklet. 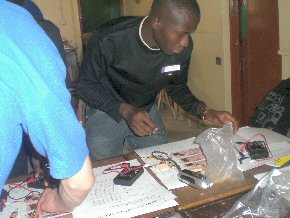 getting to know the kit 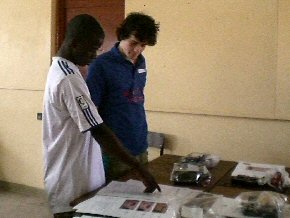 Having never taught in the Gambia before, both Dan and myself found the experience to be nothing like we expected and soon found ourselves rapidly changing the plan we had on how to teach our booklet. We quickly adopted a golden rule of never ask a yes or no question and instead we got them to explain what they had just learned to draw the knowledge out of them. After a couple of hiccups in the earlier sessions we quickly got into the flow of teaching Gambian style and marvelled at the joy they took in building the circuits and seeing the components light up in front of their own eyes. Unfortunately, we only had 45 minutes with each group and weren't able to get through all the kit, but many of the trainee teachers were so eager to learn they skipped part of their lunch so we could go through the extra components with them which they were fascinated by; particularly the Light Dependent Resistor.

By day 2 of the teaching we had rapidly expanded our list of analogies from lorries and loaves to include such things as a police check point and speed cameras as a way of teaching that the ammeters must be connected in series. We even managed to get them to dart in and out of the tables as they pretended to be Lorries having to drive on multiple roads to deliver to their shop as a way of demonstrating the idea of parallel circuits in a fun, practical way. This was to the annoyance of the other groups as they would have to contend with trainee teachers darting around them throughout the day! 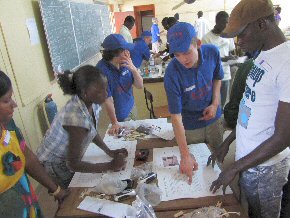 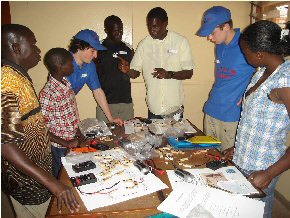 one of the trainee teachers teaching us

The best part of each day came at the end when the trainee teachers had to teach what they had just learned to one another. It was extremely rewarding to see them teaching our electricity booklet, which they themselves had only learned about a few hours before, with such success. On one of the teaching sessions, done by a trainee teacher who had given up part of his lunch to learn more about the kit, we were lucky enough to get a local student to be taught by this trainee teacher. It was brilliant to see him become amazed by the light dependent resistor and by how the simple action of blocking out the light with his hands had such a dramatic effect on the other components in his circuit.

We were able to bring out 30 pairs of electricity booklets and equipment out with us, the majority of which will be given to some of the trainee teachers when they graduate with the rest going to the teacher training college itself. Although both the booklet and equipment worked far better than we expected, (not a single piece of equipment was broken during the entire week) we are already working on improvements that could be made, and extra pieces of equipment that we could create, to further enhance the number of experiments that are available. Hopefully, what we taught at the teacher training college will find its way into the class rooms of schools across the Gambia and enable children to have a practical understanding of such a vital part of physics.