The 2012 Microscopy and Science Workshops were held simultaneously in two rooms at Gambia College over four days - 11th to 15th February 2012. Gambia College is located in Brikama, a town about 20 miles south of the capital, Banjul, with good tarmac road access. Each room accommodated 20, so each of the 80 student teachers attending spent one day at the Microscopy Workshop and one day at the Science Workshop. The Science Workshops were divided into five topics; Moments, Chemistry, Radioactivity, Electronics and Waves. This is Chris Robertson's report on the Science of Waves.

Science Workshops 2012 - The Science of Waves

Waves exist all around us as sound, a stone dropped in a pond, a Mexican wave or the means of receiving a mobile phone text. In the "waves" workshop we made Mexican waves, discovered how waves are bent, and how the eye works. A key objective was to show how we can experience how the world works and understand it using simple experiments with minimal or no special or expensive equipment. Hence, the waves bench looked very unimpressive; straws, a cheap plastic tray, bits of wire, cardboard, paper and ruler. The only concessions were a wind up torch and a proper lens - but we managed to dispense with the latter in the end.

The student teachers were very eager to learn and great to work with. Here are just a few of the experiments we did:

A wave made by people. The wave travels from person to person but the people stay where they are. Like a wave at the seaside the wave travels but the water largely stays where is (apart from going up and down). This is a good illustration how waves transmit information.

Pen in a beaker

Insert a pen vertically into a beaker of water. Look through the beaker and the pen appears broken except when placed dead centre. This illustrates how light is bent or refracted when it passes from one medium into another. The beaker acts as a lens.

- Apparatus required: Clear plastic bottle with the top chopped off, pen or stick. 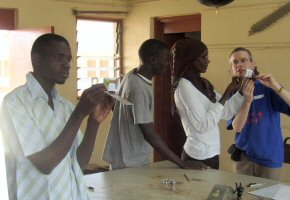 focusing an image through a lens 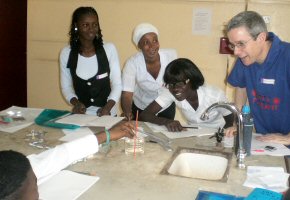 Sounds complicated but its simply a small loop of wire dipped in water. The drop of water retained in the loop forms a curved surface like the plastic bottle in the previous experiment which again refracts the light - a cheap but rather fragile convex lens and the first step to building a microscope or an eye.

We built a rather large, monster-sized eye using a large clear plastic bottle for the eye, a piece of card with a hole in for the iris, and a glass lens for the pupil. A piece of paper behind the eye could be used to capture the image. The torch we used as the object happened to have three LEDs in a line. This was really useful as by covering the LED on one side of the torch you could see how the bright spot on the opposite side of the image disappeared - showing how the image was inverted. We found that the image formed behind the eye not at the back of the bottle where the retina would be - a long sighted monster. Adding another lens in front of the other - or if you prefer giving the monster a monocle - resulted in the image of the torch forming inside the eye (i.e. in front of the retina). We now had a short sighted, and rather irritated monster. A neat trick (courtesy of Joe and Lara's amazing science book) is to add a spot of milk to the water in the eye. This scatters the light so that you can see the rays of light as they pass though the eye and how the paths change direction.

Over the course of the workshops I realised we could replace the glass lens (which a teacher might well not have) with another plastic bottle base. This worked really well as by squeezing the bottle the shape of this lens could be be altered like a real pupil to focus the light.

By the third day the final innovation was to add milk to the bottle pupil. This clouded the pupil blurring the image just like a cataract. We were then able to perform a cataract operation - simply empty out the milky water and replace with clear water. Physics meets biology meets surgery!

To do the last experiment we used a side room which was reasonably dark. On one occasion we forgot the time and emerged to find everyone else had gone off to lunch. The thirst to learn from our students was wonderful to experience.