Pageant ran a Microscopy Workshop in February 2010. This was mainly funded by an award of £3,000 from the Royal Microscopical Society (RMS) Vice President's Fund in 2009. We are delighted to report that once again we have been given a further donation by the RMS, this time of £3,185, as a winner of the Vice President's Award 2011. This will be used to fund Microscopy Workshops for trainee science teachers in The Gambia during February 2012. 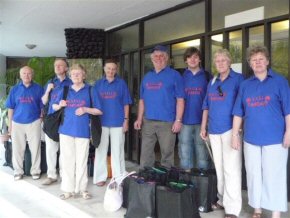 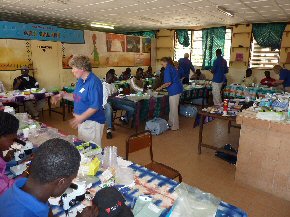 The 2010 microscopy workshops were really successful. They were held these in four different schools two or three days apart. One school was in Banjul, two in the densely populated Western Region, west and south of Banjul, and one across the Banjul River in the North Bank region. Around 80 teachers from 40 schools took part, but unfortunately 'up-country' teachers were unable to attend. (see details of 2010 Microscopy Workshops). We considered having an up-country venue for one of the 2012 Workshops, but the logistics of Gambian travel make it very difficult to access schools in the up-country areas. Not only are the roads bad, but there is nowhere to stay. 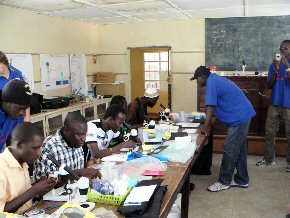 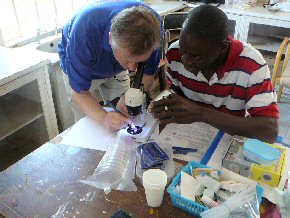 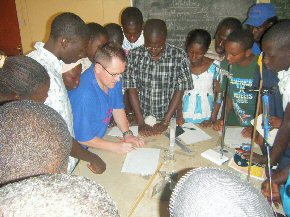 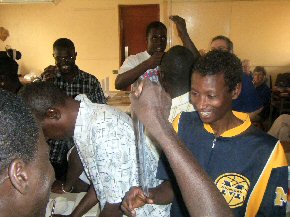 Joe Brock, Head of Science at Collyer's Sixth Form College in Horsham, organised the collection of suitable equipment - much of it donated by Collyer's - designed the experiments and demonstrations, and also wrote a teachers' manual 'Basic Science for Gambian Schools' for the workshops. A version of this book was used for an Institute of Physics programme, coordinated by Joe, in Tanzania in 2010. (See IOP webpage) It is now in its second edition and has been renamed 'Teaching Practical Physics Anywhere'. We owe an enormous debt of gratitude to Joe, who was the key figure in all these events. He wrote another book covering GCSE level science for the 2007 workshops. We used Jo's first book again in 2011, when Collyer's provided 10 more kits, which were used alongside the equipment donated by Technology Supplies Ltd. We now find copies of Joe's book in many of the schools that we visit.

We have found that Gambian teachers are generally receptive to new ideas and are very motivated. The Gambian Education Department is now encouraging teachers to change from the old purely theory-based science lessons to a more pupil-centred, practical approach, so our workshops and the equipment we provide are very welcome at all levels.

The 2012 Microscopy and Science Workshops were held concurrently in two rooms at Gambia College over four days - 11th to 15th February 2012. Gambia College is located in Brikama, a town about 20 miles south of the capital, Banjul, with good tarmac road access. Each room accommodated 20, so each of the 80 student teachers attending spent one day at the Microscopy Workshop and one day at the Science Workshop.

The workshops went really well - the UK party of 14 plus the wonderful Gambian helpers managing to cope with 40 student teachers each day (plus a couple of extras that managed to creep in one day!!). One problem was that the team were all so busy that they didn't have time to see what was happening in the 'other room'. However, the Chemistry topic was split between the two rooms, so they all managed to get a bit of exposure to that. 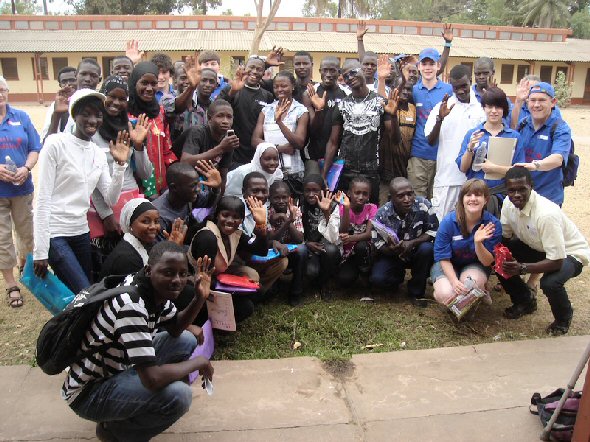 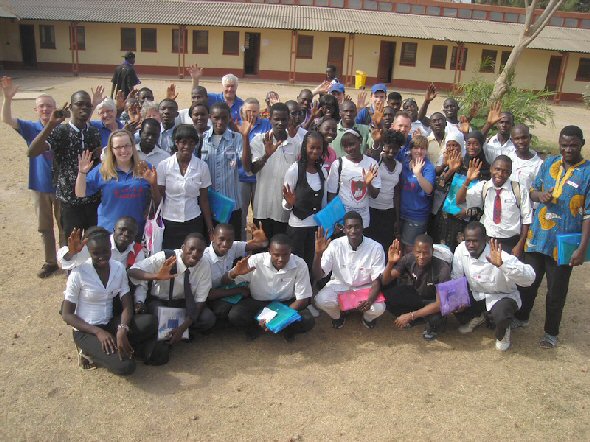 The first session of the Microscopy Workshops concentrated on familiarising the student teachers with the contents of the kits, and explaining how the kits could be used for teaching. The following three sessions were devoted to explaining how to get the best out of the three types of microscope used in the workshops; a Motic monocular microscope. an Apex stereo microscope and a multi-objective transmitted light microscope. At the end of each day, the student teachers demonstrated their newly acquired skills by holding teaching sessions for groups of local school children.

In all 50 microscopy kits were put together. 10 will stay at Gambia College for further teaching and 40 kits will go with selected student teachers, when they qualify and take up posts in their new schools.

The Science Workshops were divided into five topics, each run by specialised members of the Pageant team. These were;

The student teachers were divided into 5 groups. Each spent 45 minutes at a station getting instruction on a particular topic and then they moved on to the next station. This way everyone got the full range of experience, and hopefully understood how to teach in a practical way with equipment which is cheap but effective.

One hundred copies of Joe's book, now updated and renamed Teaching Practical Physics Anywhere, were printed for us free of charge by NPL. 20 of the 30 Physics kits were paid for from Pageant's general funds, the other 10 being donated by Pageant members and supporters. The equipment in these kits was selected and assembled by Science students and technicians of Collyer's Sixth Form College in Horsham. A group of First Year Science students at Collyer's also designed and made 30 kits of specific electricity experiments, which could be performed in schools with no electrical supply and no money to buy batteries and wrote their own book, Teaching Electricity Anywhere. These 30 kits and books were funded by the Institute of Education and two of the Collyer's students came out with us to run their experiments for the workshops. By special request from Gambia College, we included some Chemistry experiments, which were paid for from Pageant general funds. Once again, efforts were made to make these workable with local, inexpensive resources. Each student teacher attending the workshops was given a copy of Joe's Physics book and other instruction notes, in addition to their folder of microscopy literature.

In a similar manner to the microscopy kits, 5 each of the physics and electricity kits will remain at Gambia College, to help with further teaching. The other 25 of each kit will go with many of these student teachers, once they are qualified, to the schools to which they are posted. Joe and Chris have made some recommendations as to which of the workshop participants should be the lucky ones, and we hope to provide more kits as funds become available.

We will be publishing individual reports about the various topics in the Science Workshops as we get them. So far we have Jayson Probin's report on electricity and a report on chemistry. Also have a look at Chris Robertson's Blog Postings, which is an edited version of the daily postings he made during the workshops.

Horsham newspaper 'The Resident' carried a report about Collyer's part in the Pageant workshops. This can be read in The Resident online edition.

Pageant could not have funded such a large scale event as this without financial assistance. The money from the RMS Vice President's Award meant that these Gambian student teachers got some really useful instruction in light microscopy and practical science, some proper equipment to use in the classroom and suggestions for applications and samples. We greatly appreciated the donation of microscopes by Motic Europe and the Tyne Metropolitan College, without which the microscopy workshops could not have been so successful. About half the student teachers who attended were able to take away microscopy kits to their new schools when they finished their training. The science kits used during the Physics and Chemistry Workshops were so successful that we would like to provide similar kits to more Gambian schools so that they can do some practical work during their science lessons, instead of just copying from the blackboard.

We also are offering the Science Kit and Joe's text book 'Teaching Practical Physics Anywhere' as Ethical Gifts. The kit will cost £50 and the book £13.50.

Thanks from The Gambia

Pippa received this letter from Musa Ceesay, a student teacher who attended Pageant Workshops in 2011 and 2012:

"I wanted to write you a bit earlier but I was trying to see what will I do to thank you and to show you my appreciation for the wonderful effort and inspiration you have put in me. I have been thinking and finally come up with an idea of initiating a science and environmental club in my school where membership is open for every interested student.

I have written to my principal and he has given me the green light to go ahead with such a wonderful and educative initiation. My aim is to make the best use of the practicals I learned from you and anything that will encourage students in science, including science exhibitions and other educative science programs, with the aim for The Gambia to produce their own Scientist in the near future.

I am going to have my first meeting with some of the interested members tomorrow 1st March 2012. The agenda is going to be an elaboration of the importance of science in our life and also how to select the executive board among themselves. From there we can start some of the activities that will help us to archive our dreams." 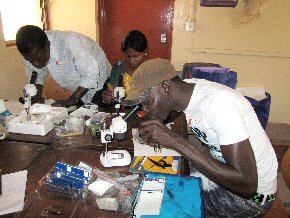 Mr Jallow is Headmaster of Barra-Essau Upper Basic School, where a microscopy workshop was held in 2009. He told us that his school did startlingly well in the 2011 Grade 9 exams (equivalent to GCSE). They achieved a 92% pass rate in Maths and 88% in Science!! When the overall national pass rates are 12% and 11% respectively, you can see the measure of the achievement. Mr Jallow was kind enough to say that a lot of the credit should go to Pageant for the Science and Microscopy workshops which his teachers benefited from, which was very nice of him.

Thanks to everyone who helped

We in turn owe a big vote of thanks to the following (in alphabetical order):

We will be supplying photographs to all these suppliers of their equipment in use during the workshops.